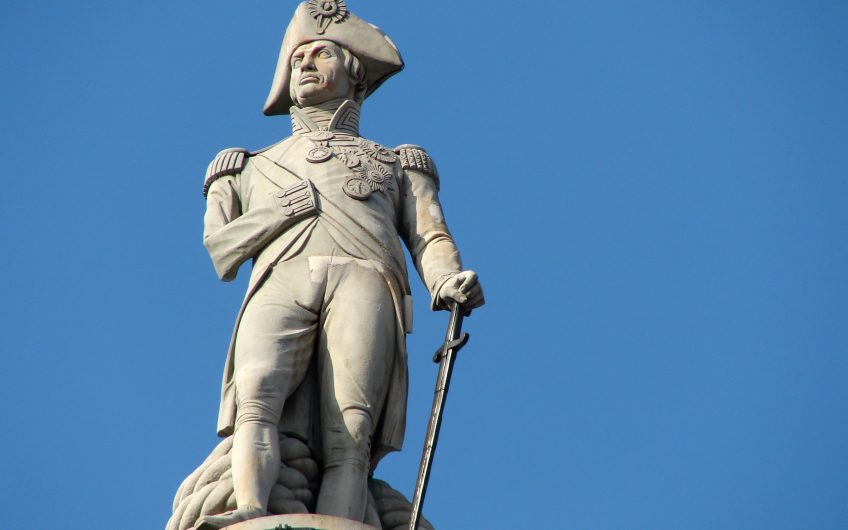 Nelson on his column (Credit: RedCoat)
View Full Size
1
of 1

As Edward Colston's statue is toppled in Bristol, David Horspool considers Nelson's Column – a monument to a man who supported slavery, resisted abolition and saved the nation from Napoleon

Everybody knows it: 16ft high, carved by E H Baily from the white sandstone of Granton quarry, outside Edinburgh, and occupying its prime London location since 1843. Described like that, the memorial – with a good claim to be the most famous statue in Britain – may not be so recognisable. But if I add the detail that it stands atop a 170ft Corinthian column in Trafalgar Square, you will know what I’m talking about.

Recently, there was a flutter of consternation when Historic England – the public body responsible for looking after pieces of the country’s past such as Nelson’s Column – promoted a scheduled debate on historical memorials by tweeting a cartoon showing the Column being knocked down.

It was an effective attempt to get publicity, coming after the journalist Afua Hirsch’s article in the Guardian arguing for demolition on the basis that Nelson was a ‘white supremacist’. But I’m not sure anyone genuinely believed there were plans to topple Nelson himself. Some people, naturally, were perfectly willing to work themselves into a lather by appearing to believe it.

Not long ago, the most noticeable thing about historical statues – as opposed to sculpted artworks inside and outside galleries – was that hardly anyone noticed them at all. If creating England’s best-known pigeon roost didn’t make Edward Baily a household name (Edwin Landseer, who did the lions at the base, is much better known), then perhaps historic statuary had had its day.

But that was before the migration to England of a campaign that began in Cape Town, ‘Rhodes Must Fall’. In its original form, the campaign succeeded. It achieved the removal of the seated statue of Cecil Rhodes – a man even Niall Ferguson, hardly a Marxist snowflake, has described as a ‘robber baron’ – from the University of Cape Town, built on land he bequeathed to South Africa. In less generous mood, Rhodes had presided over events such as the battle of Shangani River, when 1,500 Matabele warriors were cut down by Maxim machine guns in the hands of Rhodes’s British South Africa Company mercenaries.

In Oxford, the campaigners first had to deal with the fact that very few people had noticed that the university possessed a statue of Rhodes. Once the offending article had been located in its recess in Oriel College, a battle broke out between the Rhodes Must Fall and the Rhodes Must Stay factions. Rhodes stayed, after several Oriel benefactors threatened to withdraw donations to the college.

Suddenly, everyone knew the statue was there, and Henry Pegram’s rather diffident-looking sculpture of Rhodes was headline news. On the plus side, it was now common knowledge that Rhodes’s legacy to the university, and the scholarship which bore his name, did not emerge from a life of unblemished good works. Rhodes was a bad man but, in Oxford at least, his money has been put to good ends.

Almost simultaneously, a historical argument in the United States that had centred on the flying of Confederate flags began to focus on Civil War-era statues. This time, it was the proposed removal of a memorial, to Confederate general Robert E Lee, that brought out the protesters at Charlottesville, Virginia. The fact that a pro-removal protester died, and that many of those who supported retaining the statue were representatives of a newly emboldened far right, made statues headline news. If that wasn’t enough, there was the President, who managed not to condemn unequivocally the fact that someone had driven a car at speed into a group of peaceful protesters, killing one of them.

When the stakes get this high, it’s hard to welcome the new-found attention for historic statues. No piece of stone or bronze is worth dying over. But in most respects, if statues of historic figures make you think about historic figures, that is surely a good thing.

And yes, sometimes what emerges may be too unpalatable for us, in all conscience, to carry on pretending the statue should remain on public view.

Even that sentiment may not be set in stone. In Russia, years of removing statues of Lenin and Stalin have been followed more recently by the erection of new memorials to rehabilitated icons. In India, however, statues of colonial masters and mistresses were removed permanently after independence, sent to museums or out-of the-way parks, or found more suitable homes –such as Lord Auckland’s statue, shipped from Delhi to New Zealand, where it stands in the city to which he gave his name.

As for Nelson, he was certainly in that majority who supported slavery and resisted abolition, cursing Wilberforce, whose ‘damnable doctrines’ he thought hypocritical. But he also saved the nation from invasion by Napoleon. And, it could be argued, he was instrumental in raising the Navy to its status as the most powerful on Earth, and thus more effective in suppressing slavery when Britain at last saw the error of its ways.

In other words, history is complicated. Perhaps the best illustration of that is the figure carved by John Edward Carew at the base of Nelson’s Column. It depicts a black seaman, described by the historian Madge Dresser as London’s ‘only public portrayal of an African who is not only both upright and individualised, but armed as well’. It would be a shame to lose that.

A Kilkenny jewel – the Old Un