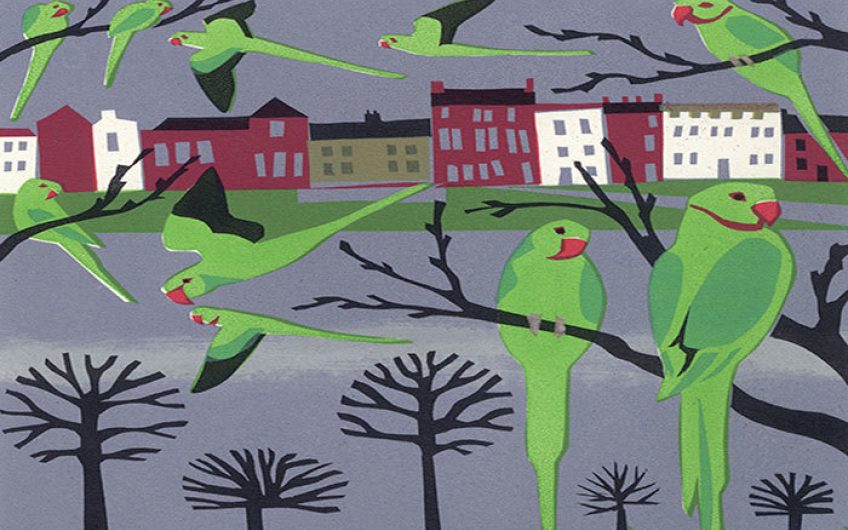 The Journal of Zoology has revealed that, contrary to myth, a stoned Jimi Hendrix didn't release a pair of parakeets in 1968, leading to the current boom in their population. In fact, they've been in the country since 1855.

The rose-ringed parakeet (Psittacula krameri, named after the 18th-century Austrian naturalist Wilhelm Kramer) is also called ring-necked. Only the male has the black, rose-edged ring and black bib. Both sexes have an unshapely rose beak and are new-leaf green, with six- to seven-inch tails. They bring a flash of spring to the bleakest winter day and would certainly brighten any Christmas tree.

The rose-ringed parakeet is the most northerly of the world’s parrots and prob- ably the most numerous. Sensationalists say the British wild colony was founded by pets escaped from celebrity owners such as Jimi Hendrix and Mick Jagger, but our acquaintance with this southern- Asian and sub-Saharan bird has a much longer history.

Its beauty and mimicry have made it a popular pet since antiquity. In India, where it remains particularly abundant, it was prized by kings. It arrived in Europe in the Middle Ages as the most exotic of caged birds. There is ample evidence that it reached England. Two are carved on a 14th-century misericord in Wells Cathedral; another is perched on the Christ child’s wrist in a 15th-century English book of hours. It was believed parrots automatically said ‘Ave’ (Hail), the Archangel Gabriel’s greeting to Mary at the Annunciation, and were thus sym- bols of purity. John Skelton (1463-1529), in his satirical poem ‘Speke Parott’, described his rose-ringed narrator:

Wythe my beke bent, and my lytell wanton iye,

My lytell legges, my fete bothe fete and clene,

I am a mynyon to wayte apon a quene;

The surprise is that such an adaptable species took so long to spread its range.

Today it spans the globe from China to the USA, and among European cities it has colonised are Rome, Lisbon, Paris and Brussels, where in 1974 it was delib- erately released by a zoo owner.

In modern England, the first escaped birds were seen in Dulwich Park in 1893; the first wild breeding pair in 1930 in Epping Forest; the next not until 1971 in Croydon and Shirley. Then numbers soared (see Living Hell, March 2015). It was officially admitted to the British List in 1984. The 2014 UK Breeding Bird Survey showed its percentage increase only surpassed by the little egret; but, while the British population has multi- plied to more than 30,000, geographical expansion has been slow. Apart from

the Isle of Thanet there is no significant breeding colony outside Greater London, although it has bred in Wales and North- umberland, and has been seen in central Scotland and once in Ireland, in Cork. Fears that it drives out other hole-nesting birds seem unfounded. Greater spotted woodpeckers give it short shrift; doubts persist about nuthatches. The slow ad- vance from London of this beautiful bird with the squeaky-toy call should perhaps be welcomed. In India it is considered a national pest, the cause of untold agricul- tural damage.