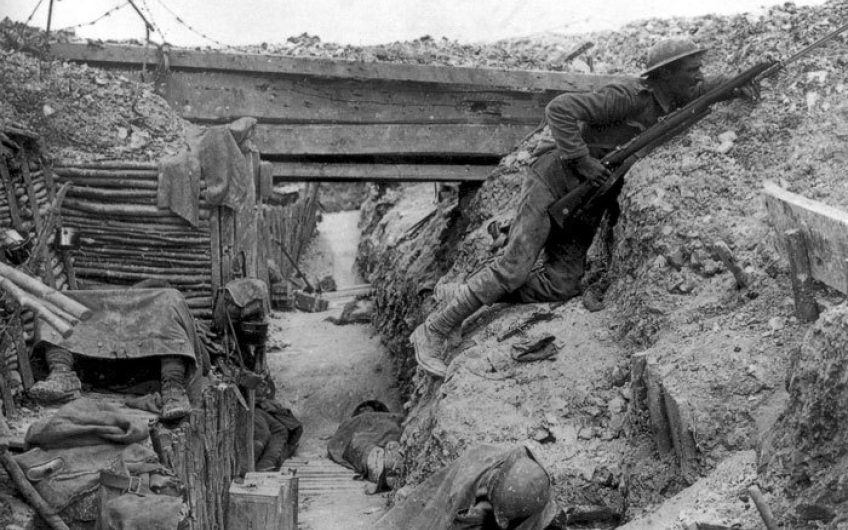 A German trench occupied by British Soldiers near the Albert-Bapaume road at Ovillers-la-Boisselle, July 1916 during the Battle of the Somme. The men are from A Company, 11th Battalion, The Cheshire Regiment.
View Full Size
1
of 1

10 years after the death of the last survivor of the First World War, Henry Allingham, producer John Lloyd mourns his military ancestors who inspired Blackadder

When Richard Curtis and Ben Elton told me they wanted to set the fourth series of Blackadder in the trenches of the First World War, I thought they had lost their minds – and certainly all sense of taste and decorum.

Watching the first episode in 1989, Ben’s Uncle Geoffrey (the distinguished Tudor historian G R Elton) was appalled. He wrote Ben a stiff letter saying that, while he’d enjoyed the second series, the portrayal of the British Army was simplistic and insulting, reminding him that the entire Elton family (émigrés from Nazi Germany) owed their very existence to it.

I’m from a service family. My father was in the Royal Navy, man and boy, for almost 40 years. In the Second World War, he commanded a flotilla of motor torpedo boats in the Dover Patrol and his breezy approach to the job is referenced in Hugh Laurie’s line in the last series, when the gang joins the Royal Flying Corps: ‘Up-tiddly-up, down-tiddly-down, and back home for tea and medals.’

As a Navy kid, I knew how to navigate and could name all the parts of a gaff-rigged clipper. At school, I was cadet petty officer and head of the Naval Section in the Combined Cadet Force, and very nearly joined the Navy myself. I still get a lump in my throat if I see a trim warship, lined with sailors, leaving or entering a port.

Before the war, grandpa had been in the Indian Army, but something went wrong and he bought himself out and legged it to California. He arrived in San Francisco the week after the 1906 earthquake, worked as a docker humping sacks of sugar, and was a hobo in the Yukon for a while, panning for gold.

When war broke out, he patriotically returned to England and joined the Royal Naval Balloon Corps as a pilot observer. Aficionados of Blackadder will remember that Captain Darling was also in the fictional ‘Women’s Balloon Corps’.

Wilfred would fly his balloon across the Channel to France and report back on enemy troop movements. One day, he flew too high and, like a diver who ascends too fast, got an attack of ‘the bends’ and was invalided out of the Navy. He was a lot luckier than most.

My maternal grandfather, Sid Turnpenny, was in the Territorial Army. He had joined the East Kent Yeomanry, known as ‘the Buffs’ – as in ‘Steady the Buffs!’ – and was one of 62,000 men sent to Gallipoli by the then Secretary of War, Winston Churchill, along with 62,000 horses – which they rode to pull the guns. Unlike many, Sid survived the experience and often talked about it.

‘My horse was shot from under me at Gallipoli,’ he used to say, ‘but at least we had something to eat!’ (They made the dead horses into rissoles, apparently.)

Afterwards, he was sent to the trenches where he was badly wounded. They decided they’d have to cut off his leg, but had run out of morphine. The medics offered him champagne to ease the pain, then found they’d run out of that too. So he was shipped back to Blighty, where the hospital decided he could keep his leg after all.

But it was never the same – he never played golf again – and nor was he. Before the war, he was a cheerful, outgoing sort, but shellshock made him withdrawn and surly. In his whole marriage, he never once kissed my grandmother, nor was he ever even seen to put his arm round her.

While he often spoke about his time on horseback in the Dardanelles, only once did he mention his time in the trenches. As he was dying, my mother tried in vain to give him one last hug and he growled, ‘I hope I don’t have to go back to the trenches again.’

If Sid was a galloping blend of Baldrick and Lieutenant George, General Melchett was – partly – inspired by my great-uncle. Like Stephen Fry, he was tall and charming but, unlike Melchett, he knew what he was doing. A brilliant polo player with the maximum 10 handicap, he was captain of the Irish team that took silver at the 1908 Olympics. He had fought with distinction on the North West Frontier and in the First Boer War, becoming one of the founders of the Tank Corps and a Chevalier of the Legion d’Honneur. He was never heard to go, ‘Baaaah!’

Blackadder has always been popular in the British armed services. The opening titles of Blackadder Goes Forth were shot at Colchester Garrison (pictured), with real squaddies from the Royal Anglian regiment, dressed in WWI uniforms, marching alongside the cast.

As a result, many military positions in the first Gulf War in 1991 were officially named after its characters – the Blackadder Lines and the Melchett Lines, for example, and, at one point in the 1990s, more than half the regimental goats in the British Army were called Baldrick.

Silly though much of the humour is in Blackadder Goes Forth, the seriousness of what we were doing was ever-present during the making of it. Just to stand in the trench set looking up at the blue studio cyclorama was a chilling experience.

Rowan Atkinson’s overriding memory of the last episode was the knot in his stomach during rehearsals.

‘It was the first time’, he told me recently, ‘I had experienced a visceral empathy to a character’s dilemma: I really did feel something awful was going to happen to me at the end of the week. As, fictionally, it did. Perhaps serious actors get that sort of thing all the time, but to me it was a new experience…’

His grandfather had fought in Palestine during the First World War, and his father missed the boat at Dunkirk, to spend, as Rowan puts it, ‘five years as a guest of the Reich’.

The last episode of Blackadder Goes Forth is an extraordinary piece of writing by Ben and Richard, and it was key to the whole series. Richard says that if they hadn’t been able to end it that way, they wouldn’t have written it.

It starts larky and optimistic with everyone recalling their time before the war and their enthusiasm for joining up. But, as the story develops, it slowly darkens. The jokes get sparser, the humour drains away, and it ends with one of the most poignant scenes in television; certainly in sitcom.

But the final scene, where Blackadder and his men finally go ‘over the top’, began as a card-carrying disaster. The recording of the episode had gone well but, as so often, we ran short of time, and the 10 o’clock deadline where the crew could legitimately ‘pull the plugs’ was fast approaching.

The No Man’s Land set was so huge that it had had to be built in another studio, remote from the audience and out of sight of the control room. The actors were rushed round there with only a few minutes of recording time left.

Because we’d not had time to rehearse the scene, when the lights were dimmed and the director, Richard Boden, called ‘action’, chaos ensued. It was pitch dark; there were unfamiliar ladders to climb; and no one had expected the pyrotechnics. Through blinding flashes and deafening bangs, the cast struggled towards the battleground, which was pitted with bomb craters and strands of barbed wire. Between explosions, they could clearly be heard cursing and grumbling as they banged knees and elbows.

The audience watching on the studio monitors sat in bewildered embarrassment at this lame conclusion and the take was a complete write-off. As the hands of the studio clock crept up to ten, the director and I agreed there was just time for another go.

But it was not to be. In the darkness, Rowan, shaking with fury, grabbed the studio manager’s walkie-talkie and tore into the production team.

‘That was an utter disgrace,’ we heard him say over the loudspeaker. ‘It was incredibly dangerous and frightening, and there’s no way we’re going through it again.’

And that was that. It was a deeply dispiriting end to what had been a great beginning.

That sinking feeling returned when we got to the edit. The programme had cut together extremely well and we could see we had something wonderful on our hands. But then we were faced with the utterly unbroadcastable two minutes of grumpy actors going ‘Ow!’ and ‘Bloody hell!’ as they ambled gingerly (they were meant to be running) across the lumpy artificial mud.

My head was in my hands. There was no way out of this. And then something miraculous happened. Bit by bit, the crew in the edit suite began to transform the most leaden of lead into pure gold.

A combination of extreme slow-motion and mixes, fading to sepia, a still shot of poppies hastily borrowed from the BBC picture library and slowing down the sound track to invest Howard Goodall’s signature tune with an eerie plangency, produced something astonishing.

We were awestruck. And the overwhelming emotion was not, as you might expect, pride – or even relief – but humility. Somehow, we had touched the numinous.

After the episode aired, G R Elton wrote his nephew a second letter, grudgingly admitting that he’d got it wrong and expressing his approval. And Rowan had dozens of moving letters from elderly ladies whose husbands or fiancés had not returned from the war, just saying thank you for the respect we had shown them.

On Sunday 11th November, I will be in Shinrone, Co Offaly, the little village where my father’s Anglo-Irish family comes from, attending a Remembrance Service with my brother Andrew at St Mary’s Church. We will be there to commemorate the 38 men of the parish who made the ultimate sacrifice, and to give thanks for the five who returned alive. One of the latter is listed simply as Lloyd, John H.