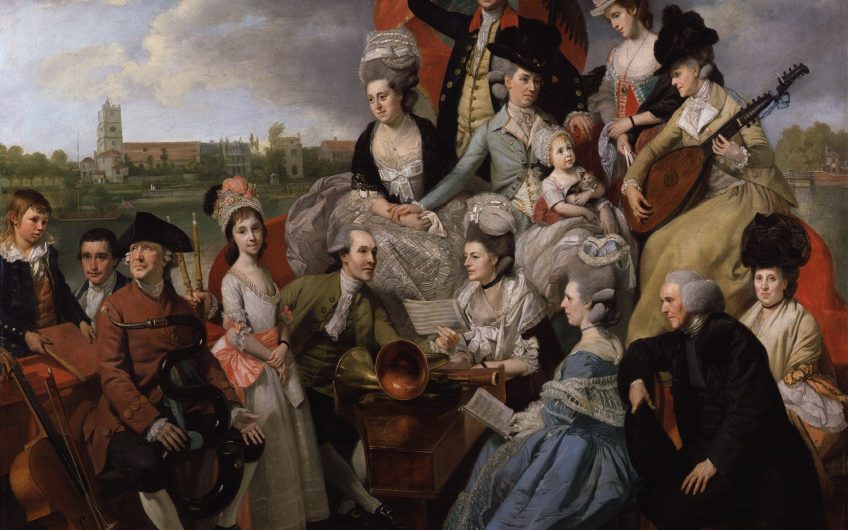 Musicians, surgeons and abolitionists... the Sharps of Northumberland were a lesson to us all, says Elisa Segrave

The Good Sharps: The Brothers and Sisters Who Remade Their World by Hester Grant

This is the story of seven siblings born in the 18thcentury, their considerable achievements and their philanthropy.

Raised in a remote Northumberland rectory, where their father, Thomas Sharp, was parish priest, the Sharp children spent three months each year in Cathedral Close, Durham. At 28, Thomas père was made Archdeacon of Northumberland.

The author begins with the extended family’s portrait by the German artist Zoffany, commissioned in 1779 by William, who had become a prominent London surgeon. There were seven surviving siblings – the eldest, Thomas, having died in 1771. The family is posed on its ‘pleasure barge’ the Apollo, on the Thames at Fulham (where William later bought a country retreat), for one of its musical water parties. The Sharps loved playing instruments, singing and hearing composers such as Johann Sebastian Bach and Carl Friedrich Abel, both friends of the family.

The author’s balanced prose is ideally suited to her imaginative and delicate reconstruction of the past. In summer 1770, the Apollo, with the Sharp family and musicians aboard, set off from Kew Bridge (opened 11 years earlier) to a Handel aria, conducted by the Italian composer and violinist Felici Giardini. The four ‘little princes’ – George, (the future George III), Frederick, William (the future George IV) and Edward - hearing the music over the water, ran from their residence at Richmond Gardens to the riverbank. William called for requests from ‘their Majesties’. The little boys conferred, and George requested the folk tune ‘The Miller of Dee’.

On 8 August 1770, the Apollo, returning eastwards to London Bridge, paused at Kew where, as recounted in her diary, the oldest Sharp sister, Elizabeth Prowse (widowed at 35), spotted King George III, Queen Charlotte and Queen Charlotte’s brother the Prince of Mecklenburg ‘sitting on the river terrace under a large tree’. An ‘impromptu royal command performance’ began. When a thunderstorm ensued, William and James struggled ashore, improvising a shelter for the royals with their boat’s detachable cover.

Grant also describes harsher aspects of 18th-century life. The Sharps’ mother, Judith, had 14 children; five died in infancy and one at 16, en route to the East Indies. Her pregnancies were only five months apart and she was expected, besides dealing with potentially lethal illnesses like scarlet fever, to teach her young children. Only the two eldest boys, Thomas and John, who later became clergymen, could afford to be sent to university. They went to Trinity, Cambridge.

William’s apprenticeship to a London surgeon involved ‘excision of cancerous tumours from the breast … the patient writhing and screaming’. One morning in 1765, another brother Granville, a linen-draper’s apprentice and then a Civil Service clerk, encountered Jonathan Strong, a boy slave, outside William’s weekly free surgery in Mincing Lane. He had been so badly beaten that his head was swollen, ‘a disorder fell on his eyes’ and he was ‘lame and almost blind’. When his owner claimed possession, Granville fought a legal case for Strong. Anger propelled him into becoming an active abolitionist.

In 1772, Granville’s memorandum book referred to ‘James Somerset, a negro from Virginia’. Transported from Africa as a child in a slave ship, Somerset became a trusted manservant to a Scottish trader, Charles Stewart. When he absconded after two years in London, Stewart employed slave-catchers. Granville produced for Somerset’s lead counsel, ‘Bull’ Davy, an iron muzzle, made in England, ‘called a Mouth Piece used sometimes for preventing the poor wretches from gnawing the sugar canes’. He thought the national obsession with sugar and puddings - ‘tarts, moulds, bettys, junkets’ - made people turn a blind eye to the Caribbean slave trade. Granville also taught himself Greek, Latin, Hebrew, and ‘the Syriac and Chaldee dialects’.

As for the other members of the family, John Sharpdeveloped, within twenty years, a mini-welfare state at Bamburgh Castle in Northumberland, with schools, medical facilities, a lifeboat station and subsidised food. James Sharp was an innovator, manufacturer, pioneer of the Canal Movement and a member of the Bill of Rights Society.

It was common for unmarried women to live with siblings, but the Sharps were exceptionally close. Judith, an artist, turned down two marriage proposals. The youngest sister, Frances, spent her later years with Elizabeth who assisted the rural poor while running the Northamptonshire estate she had inherited from her deceased husband.

This is a quietly ambitious book, impeccably researched, and full of interest.

A sojourn in Russia’s most eastern outpost

How Barry Cryer became an Oldie star – and my hero. By Ben Tisdall