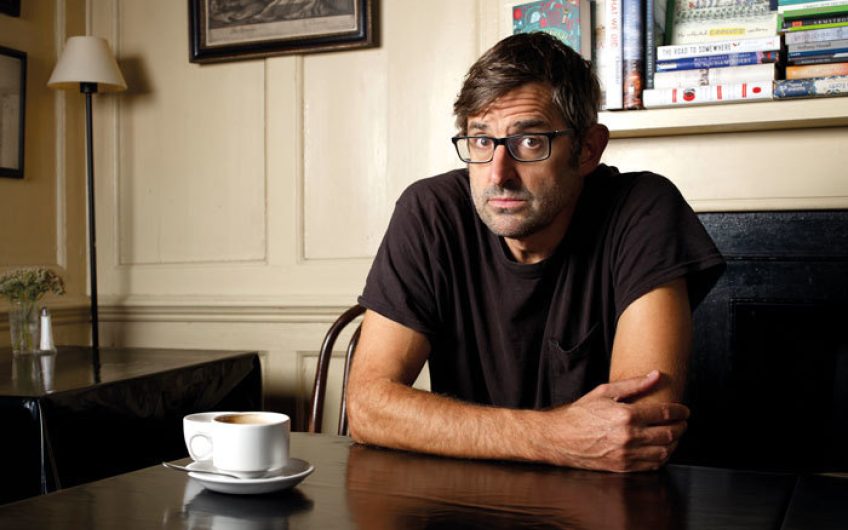 The Socrates of the BBC starts a new series on September 6. Louis Theroux talks to Harry Mount

In his new memoir, Louis Theroux says people are often shocked to find he’s the same in the flesh as on TV.

He certainly is – and he’s been much the same for 30 years.

I was the year below him at Westminster School and Magdalen College, Oxford. And he’s pretty much unchanged, as he turns 50. Then, as now, he was gentle, polite, sardonic, ironic, bespectacled and deeply curious.

There’s always been an in-built comedy in his delivery and choice of words. During our interview, over lunch at Soho’s Academy Club, he is asked what vegetables he wants. He says, in that familiar, wry, deadpan, polite way, ‘I love a courgette if it’s done right. It’s quite a high-risk vegetable.’

I remember him, 30 years ago in the college bar, politely asking why I always went on holiday to Italy.

‘Surely you should keep on trying different places to find somewhere better? Wouldn’t it be terrible to find, aged 90, you’d been going to the wrong place?’

Then, as now, he was a modern Socrates, softly asking questions that exposed inconsistencies in your opinions. Because of that friendly, confiding manner, you end up, like his hundreds of TV interviewees, unburdening yourself of your deepest, most real thoughts. When I turned off the tape recorder, I found myself being Therouxed – responding to his thoughtful questions and happily revealing hidden feelings about my personal life.

Because he’s always asking questions on TV – he says he has ‘an urge for invisibility and escape’ in his documentaries – it’s a shock to hear him talking at length, and making long statements. The conclusions I drew from those statements were how clever – and worried – he is.

I may have been educated at the same places as him but not with the same reverence from our tutors. When he got into Magdalen, the acceptance letter referred to ‘this remarkable man’. In 2015, he single-handedly won University Challenge for a Magdalen alumni team, answering questions on Tennyson, Pope Linus and Mad Men.

In his first year, his history tutor Angus Macintyre said he was on course to get a First. ‘This had not previously occurred to me as a possibility but from then on I saw it as an obligation,’ Theroux writes. He duly got a First.

Obligations – and worries about obligations – loom large in Theroux’s life. But he never looked worried at school, university or on telly. His super-calm demeanour suggests the opposite.

‘I have an ambient level of anxiety which I’ve always assumed is within normal parameters,’ he says with his customary precision in his hyper-relaxed voice. ‘And then sometimes I wonder if it isn’t. I don’t think it’s pathological. I’ve never for a moment thought I ought to be on something.’

In his memoir, he describes worrying, aged ten, over a geography exam on the Fulani people of Nigeria. ‘I was weeping, raging, hyperventilating. My dad tried his best to talk me down but, not knowing much about that herding people who count their wealth in heads of cattle and seasonally traverse the Sahel, he was ill-equipped to help. For years afterwards, the phrase, said hoarse-voiced, “Fulani people of Nigeria!”, became a byword for a kind of extreme stress and emotional exhaustion.’

Dad is Paul Theroux, the American travel writer and novelist. Louis’s mother, Anne, worked for the BBC (they have both remarried). Louis’s older brother, Marcel, is a novelist. A planet-brained, literary family, then – not that a young Louis saw it like that.

‘I inherited a sense that I was supposed to be a writer,’ he says, ‘If I’d had a terrific idea for a novel, I would have written it. When I looked in my heart, I didn’t see novelist there.’

‘It mattered to my dad that we met these great writers. For him, the idea of literary culture was the highest achievement. Although my dad is quite scathing about Britain, in the matter of letters he’s quite an Anglophile.’

At some level, all this seeped in.

Louis writes in his memoir, ‘Without [my parents] saying it – without their needing to say it – we were encouraged to think of ourselves as perhaps slightly better than other people, whose children didn’t read Tolkien or know who Shakespeare was.’

Theroux felt no predestiny that he should become a journalist. On leaving university, he considered becoming an academic, and had a post-graduate place at SOAS.

First, he had a year out in America. He worked in a glass factory and then drifted into journalism, working for Metro in San Jose, California, and then Spy magazine in New York, before his big break with Michael Moore on the satirical news programme TV Nation.

‘I have warm feelings for Michael Moore. I feel enormous gratitude for his having taken a chance on me, for reasons that are not apparent.

‘Basically I was very cheap. He must have thought there will be something funny about this pale, bespectacled, stick-like, English guy in the middle of America.’

‘There was a sense in which I was a beneficiary of being British. In America, for good or ill, the British are for the most part rather romanticised. In Britain, I’m conscious that there are parts of the country I would feel self-conscious about being posh.’

He then quotes the George Bernard Shaw line from Pygmalion: ‘It is impossible for an Englishman to open his mouth without making some other Englishman hate or despise him.’

In the late 1990s, Theroux was already feeling his way to his speciality – interviewing unusual people in unusual places.

‘I’ve always sought out stories where there was a deep level of self-conflict,’ he says. ‘Sometimes by choice, because someone’s pursued a lifestyle that’s odd. Or by accident, because they’re caught up in a mental-health problem of some kind.’

The new memoir is also a sort of guide on how to do a Louis Theroux interview. From Michael Moore, he learnt not to do a rehearsed entry into a house but to film the first meeting with an interviewee as it really happens.

Theroux takes his latest BBC programme as an example of his approach to documentary-making. It’s about the sex industry and the historical, traditional sense of stigma attached to it and the people who use it.

‘I don’t like to resort to a formula too much. But you state your central dilemma at the beginning, whatever it may be.

‘The question we’re looking at is to what extent can sex work be a healthy way to make money. And we answer it over the course of 60 minutes. You get to know people – three or four of them – and you check in with them three or four times. You try to go on a journey with your contributors as you peel away the onion layers.

‘In the third act, you need something to happen. You might introduce a character to bring matters to a head.’

In recent years, Theroux has been dialling down the comic side of his programmes. ‘Along the way, in the last 15 years, we stopped ruling out ideas on the grounds that they weren’t funny.’

Certain elements of his programmes have remained consistent, though. Theroux quotes Chekhov: ‘If you say in the first chapter that there is a rifle hanging on the wall, in the second or third chapter it absolutely must go off.’

In other words, Theroux befriends interviewees, however horrible they might be: neo-Nazis, San Quentin State Prison inmates – or Jimmy Savile.

Savile is the thread that runs through his memoir. He keeps on coming back to the disgraced TV star, whom he first interviewed in 2000.

In that first interview, he put to Savile rumours of his criminal behaviour. But the wily dissimulator wriggled out of any admission. Only after Savile’s death in 2011 did the full horror of his sexual attacks become clear.

‘I still like that original programme,’ Theroux says. ‘It remains a hard-headed and responsible piece of journalism.

‘The whole business was so weird and upsetting; for the victims, for anyone who worked with him, people at the BBC at the time...

‘I think he worried about it – not as much as he should have done. One of the purposes of his Catholicism was to appease his own sense of guilt; to use good works to offset at the very least questionable activities.

‘I had thought he was more or less OK – defining OK very loosely. I’d allowed myself to like him a bit. He’s quite funny. He’s very intelligent. He had very annoying qualities but he was quite relaxing to be around – diverting company.

‘It was shocking to see how much damage he’d done. There was a side of me that resisted taking it on board at first. Part of me was a little bit protective of his memory.

‘I had an urge to believe that he couldn’t have done it, which led to a certain level of guilt. I found myself in conflict with myself, which was odd.

‘We went after Jimmy Savile with a view to getting the goods. Trouble is, we didn’t know what the goods were.’

Theroux lives in London and is married to BBC producer Nancy Strang; they have three children. He was married before to Sarah (not her real name), his girlfriend at school and university. When they moved to America in their 20s, they got married in New York.

In his memoir, he writes that it was ‘a gambit intended to make it easier for her to work in America, though clearly we were in a real relationship. The term, “a small ceremony”, doesn’t really do justice to the minimalism of the occasion. We didn’t tell any friends and family. We were the only ones present and, to make it legally binding, we had to ask a passing stranger to witness the event.

‘Even afterwards, I didn’t think of myself as married; I imagined that if we ever did decide to marry “for real”, which I thought we might, we’d get married again. It was a little confusing. If you are ever thinking of marrying someone, I don’t recommend marrying them before you marry them.’

Sarah, Louis tells me, ‘was obviously a hugely important figure in my life. I was the dick in the relationship in every sense. I kind of drove the relationship off the road. I wasn’t a particularly self-aware person, especially in my emotional life. Those close to me had to suffer the consequences of that.’

He always seemed pretty self-aware to me 30 years ago. Even more so now. I’m not sure I’ve ever met anyone more self-aware in my life.

Gotta Get Theroux This: My Life and Strange Times in Television by Louis Theroux (Macmillan, £20)

Louis Theroux was photographed at the Academy Club, Soho