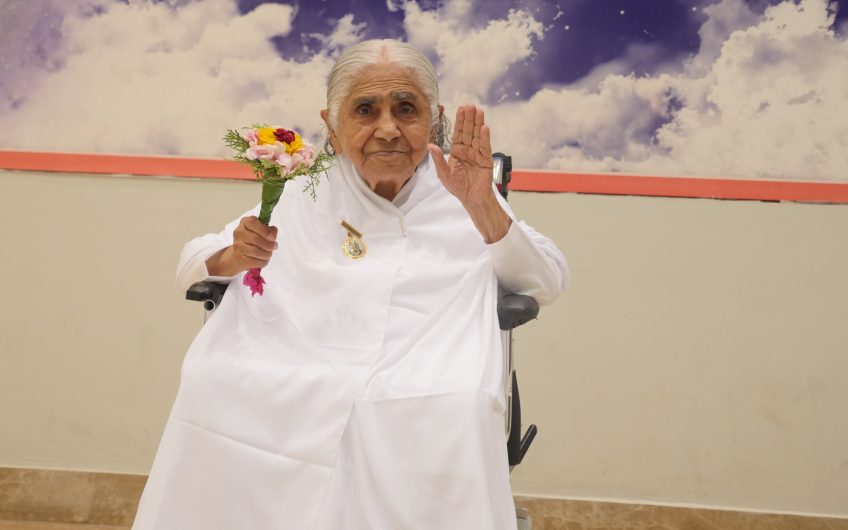 Liz Hodgkinson, my ex-partner, wrote warmly in an Oldie blog recently of Dadi Janki, head of the Brahma Kumaris spiritual movement, who died this year aged 104.

I was happy to see this photo of the two of them, which I took not long before Dadi (which means ‘elder sister’) left the UK to spend the last few months of her life back home in India. It was at the Global Retreat Centre, near Oxford, a former stately home that served some 300,000 visitors in 25 years before its closure for major refurbishment two years ago.

I was part of the team there for most of that time, and gained a lot of insight into Dadi Janki’s extraordinary leadership style. As Liz wrote, her faith and dedication enabled her to accrue an exceptional level of spiritual power. This could uplift others in such a way that worries would completely disappear, and we might then see more clearly how best to act.

A key to her accumulation of this power was a stubborn determination not to allow herself to suffer emotional disturbance. She regarded such fluctuations as interference in her relationship with God, who in her understanding and experience was a being of pure consciousness - an ocean of love, peace, and wisdom. She saw a benign purpose behind all of existence, so that even darkness had its place, in enabling light to become more visible. It was the basis of her life that by aligning herself with this light, she would help it to spread. Hence it was that, in 40 years, an infrastructure for sharing spiritual teachings of Indian origin became established globally.

There was a downside to her Napoleonic drive. She had no time for weakness. Any complaint made with feeling would be met with the wagging of a bony finger and the riposte, “Well, what are YOU doing to improve the situation?”

Loyalty to her lieutenants in this woman-led organisation also meant that at times she was slow to act on injustices, especially if alerted to them by men.

Nevertheless, I have learnt that in a world tearing itself apart with dissension on just about every front, a refusal to engage with sorrow can be of huge value, providing it is used to strengthen one’s connection with the divine.

An experience that brought this home to me happened some years back when I was MC-ing a public programme at Oxford Town Hall with Dadi Janki and a well-known architect. It was billed as a conversation between the two, but half an hour had gone by with each speaking at length, and no interaction. I tried to intervene, and was twice brusquely told “Ek (one) minute” by Dadi. When I tried a third time, she remarked, out of the blue, how much she had hated it as a child when the British spoke down to the Indians!

This upset me greatly, and early the next morning I drove to London to have it out with her. I told her, “What you said last night was like a dagger in my heart.”

She neither apologised, nor went on the offensive, nor sought an explanation. She just said, gesturing vigorously with her arm: “Pull it out!” And I did! That was the end of it as far as my hurt was concerned, though I treasure the story as a reminder of one of her favourite sayings: “Don’t let anything that weakens, enter your heart or mind.”

Despite her love for Dadi, Liz has repeatedly blamed my love affair with the Brahma Kumaris for ultimately causing the end of our marriage. I don’t accept that. On the contrary, I feel spiritual understanding and practice strengthened me enough, soon enough, to enable a rocky relationship to last longer than it would have done otherwise. It entailed understanding myself primarily as an individuated consciousness, or soul, rather than identifying so strongly with the physical side of life.

It’s true that if the spiritual penny had dropped sooner in me, and my behaviour had consequently improved, Liz might not have felt compelled to end the marriage. But I’m not going to allow that thought to make me suffer!