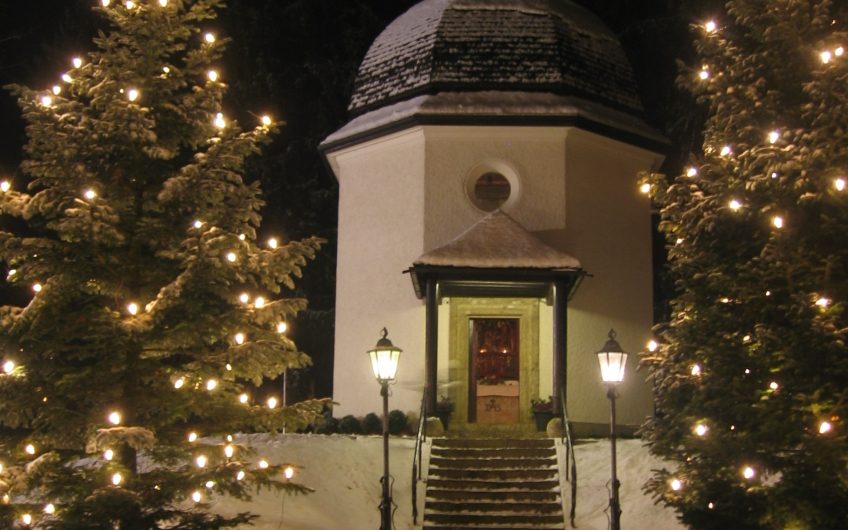 Like a lot of tepid Anglicans, I don’t go to Church as often as I should, but Midnight Mass on Christmas Eve always gives my faltering faith a welcome boost.

Our parish church resounds to the joyous sound of a wonderful array of Christmas Carols. Most of them are British - to my mind, it’s one of the many things the British do best. But my favourite Christmas Carol isn’t British but Teutonic – as Teutonic as Stollen and Lebkuchen – and this year, on Christmas Eve, it celebrates its 200th birthday.

Most well-informed oldies won’t need telling that Silent Night is an English translation of a Germanic Carol, but I wonder how many people know the story of its creation? It’s a tale that echoes the Advent story, a tale of kindness and compassion triumphing over poverty and oppression. And if you travel to Salzburg, one of my favourite places, you can make a Winterreise around the historic sites associated with Stille Nacht.

Salzburg is famous for its Christmas Markets – for my money, it’s the prettiest place in the world to do your Christmas shopping. But if you venture over the River Salzach, into what used to be (until very recently) the red light district, you’ll find the birthplace of the man who wrote Silent Night.

Joseph Mohr was born on 11th December 1792 at Steingasse 31 - then as now, one of the poorer streets in Salzburg. His unmarried mother was an itinerant seamstress, scratching a meagre living from sewing and spinning. His father was an errant soldier who vanished before Joseph was born.

Joseph’s prospects were bleak. By rights, his life should have been nasty, brutish and short. But though his childhood was impoverished, he was rescued by the Catholic Church, which gave him a first-class education. He excelled at school, and was fast-tracked into the priesthood. At the age of 24 he became a priest in the nearby village of Oberndorf.

Salzburg and its hinterland had been ravaged by the Napoleonic Wars, and the ‘Year Without Summer’ which followed the Tambora eruption in Indonesia. For Oberndorf these hardships were compounded by the Treaty of Vienna, which divided the town between Austria and Bavaria, on either side of the Salzach. Oberndorf’s inhabitants were left without a church, school or cemetery, all now across the border, over the river in Bavaria.

Mohr was the perfect priest for this diminished parish. He was used to making do, and so he set about writing simple hymns which he could strum on his guitar – an instrument associated with rough taverns, rather than places of worship. Of course his ecclesiastical superiors disapproved (he was scolded for ‘singing unedifying songs’ and ‘joking with members of the opposite sex’) but his parishioners were delighted.

One of the songs he wrote was called Silent Night, in collaboration with a local schoolmaster called Franz Xaver Gruber. Mohr wrote the words, Gruber wrote the music and, on Christmas Eve 1818, in Oberndorf, it received its first performance.

Gruber’s upbringing was a bit more comfortable than Mohr’s but, as a weaver’s son from a rural backwater, he was far removed from the urbane sophistication of Salzburg, the city of Mozart. It’s a nice irony that this basic melody, written by an obscure part-time composer, has become the world’s most beloved Christmas Carol, while so many intricate compositions of that era, penned by eminent maestros, have long since been forgotten.

It was the simplicity of Stille Nacht which enabled its migration around the world. Alpine peddlers were used to singing for their supper as they hawked their wares around Central Europe, and here was a song they could sing unaccompanied. Stille Nacht soon crossed the Atlantic, carried by German emigrants to America, and eventually arrived Down Under, with British emigrants to Australia. In 1914, it was sung in German and in English in the trenches, sparking the Christmas Day Truce when British and German troops played football and exchanged Christmas gifts in No Man’s Land.

If you make the trip to Salzburg, there are plenty of Silent Night attractions. In Oberndorf, there’s a quaint chapel (pictured) on the site where Stille Nacht was first performed and, in the attractive market town of Hallein, there’s a modest museum devoted to Franz Xaver Gruber. My favourite memorial is the village school in Arnsdorf, where Gruber toiled away as a schoolteacher. Gruber and his family lived over the shop, in a rudimentary apartment. You can visit his old lodgings, but only between lessons – it’s still a school today.

Joseph Mohr ended up in Wagrain, an Alpine village about fifty miles from Salzburg. In Mohr’s day, Wagrain was desperately poor. It’s now a wealthy ski resort. He died here in 1848, aged just 55. His grave is a popular place of pilgrimage. In his will, he left enough money to found a school. He always refused to have his portrait painted – so no-one knows what he really looked like. The museum commemorating his life is housed in a baroque mansion, a world away from the humble house where he was born.