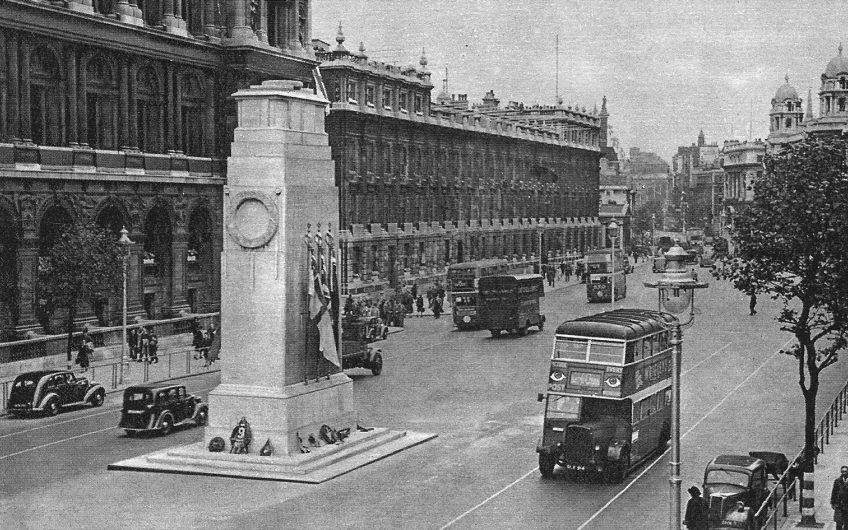 When the First World War finished, grand schemes for a national war memorial were produced and committees established to consider the problem.

The national memorial was to be a comparatively modest structure, originally intended only to be temporary: the Cenotaph. Perhaps that is rather typical of England.

When the Prime Minister, Lloyd George, needed to find ‘some prominent artist’ to design a temporary, nondenominational ‘catafalque’ for the Peace Celebrations planned for 19 July 1919, Lutyens was recommended by Sir Alfred Mond, First Commissioner of Works. That initial Cenotaph was of timber and plaster. The current, stone version, replacing it, was unveiled on November 11, 1920 – Remembrance Day.

The legend is that Lutyens produced a sketch of his proposal for Sir Frank Baines, chief architect to the Office of Works, in ten minutes, but in fact he had been thinking about it for some time and had already explored the idea of a pylon supporting a funeral effigy in his design for the Southampton war memorial.

Now the recumbent effigy was replaced by a symbolic coffin or sarcophagus on top of a tall pylon to be erected in the middle of Whitehall. The concept was converted into wood and plaster in a matter of days.

And then, the generals and politicians and soldiers having marched past, something unexpected happened: the temporary structure became sacred, ‘the peoples shrine’. Tens of thousands of women, grieving for husbands or boyfriends or sons who were buried abroad or who had simply disappeared, found that Lutyens had created a visible focus for mourning. A mountain of flowers and wreaths piled up around it; and a million people made pilgrimage.

Eventually, the government acceded to what Lutyens called ‘the human sentiment of millions’ and allowed the Cenotaph to be replicated permanently in stone the following year.

The Cenotaph speaks through pure form and deep cultural resonances. This slim pylon, which makes no attempt to compete with the height of the surrounding government buildings, somehow managed to express the inarticulate grief of a wounded, damaged society.

As, later, at Thiepval, Lutyens knew better than to resort to tendentious symbolism, whether religious, or national or military. Words and symbols were not required, although there are in fact words carved on it “just three: ‘the glorious dead’, even though the fate of most of them was not necessarily glorious.

Not that the Cenotaph is simple; it is a highly sophisticated essay in geometry and form. The bulk diminishes as it rises, governed by Lutyens’s own personal system of massing, with set-backs on alternate faces, while all the verticals and horizontals are not straight lines at all but subtle curves, governed by a system of entasis or optical correction employed in ancient Greek temples to give visual dynamism - what Christopher Hussey called its ‘magic quality’.

All the verticals are curved and sloped so that they would converge at an imaginary point some nine hundred feet in the air (the ‘frightful calculations’ for this entasis are said to have filled a manuscript book of thirty-three pages).

In its abstraction, the Cenotaph might seem somehow ‘modern’, but its power comes through it being rooted in a tradition which had - and still has - resonance: the Classical, Renaissance tradition - hence its success, and the call for it to be permanent.

And so perfect is the Cenotaph for its purpose that, after a second world war, nothing more was needed than to carve two more dates into the Portland stone: ‘1939-1945’.

There are no religious symbols on the Cenotaph: there is no cross, let alone a crucifix, nor representations of angels, of St George or St Michael in armour. This is, perhaps, surprising in a nation with an established Church. The bishops, indeed, were very unhappy about this and the burial of the Unknown Warrior in Westminster Abbey on Armistice Day 1920, when the permanent Cenotaph was unveiled, was the Church of England’s riposte to this official secularism.

Stephen Graham later recalled Lutyens saying, ‘There was some horror in Church circles. What! A pagan monument in the midst of Whitehall! That is why we have a rival shrine in the Abbey, the Unknown Warrior, but even an unknown soldier might not have been a Christian, the more unknown the less sure you could be.’

But the Great War was a conflict in which men of all religions, and none, had been fed into the slaughter. Lutyens knew this and, influenced by Theosophy (owing to his independent-minded aristocratic wife, Lady Emily Lytton), argued that not just in Whitehall but in all the war cemeteries and memorials to be built by the Imperial War Graves Commission there should be forms which had meaning ‘irrespective of creed or caste’.

The matter was debated in Parliament and the massed ranks of bishops, cardinals and ministers, and other supporters of the symbolic Cross (which included Herbert Baker), were defeated.

As Lutyens remarked afterwards, it was important ‘to make folk realise the inherent cruelty of the forced Cross’.

That, however, did not deter the Catholic Herald from later dismissing the Cenotaph as ‘nothing more or less than a pagan monument, insulting to Christianity [...] a disgrace in a so called Christian land’ as it was for ‘Atheist, Mohammedan, Buddhist, Jew, men of any religion or none’.

The Cenotaph is remarkable for the absence of any visible emblems or symbols on it representing Triumph, or Heroism, or Victory; there are only carved wreaths and ribbons, and three flags along each flank. It speaks only of death, and loss.