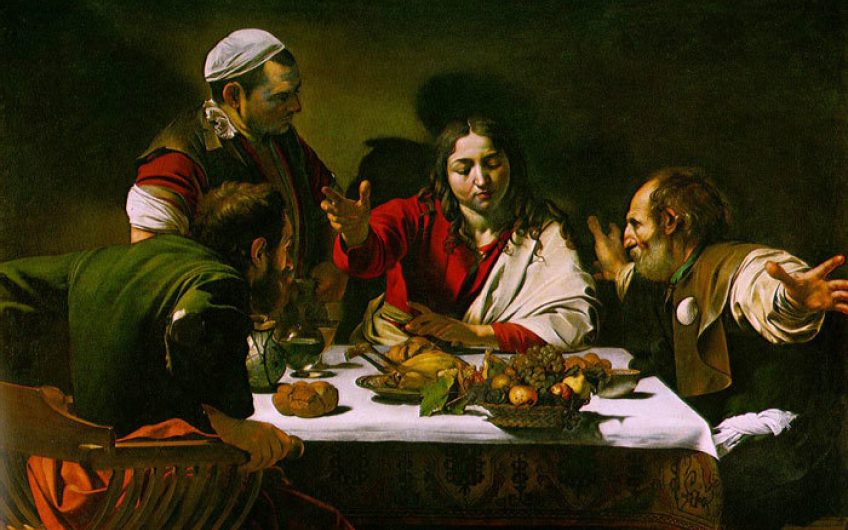 Sister Teresa on the supper at Emmaus. She appeared on Radio 3’s Private Passions on Easter Day

One Eastertide, years ago, a very young priest looked down at the congregation from the lectern and said, ‘I bet you lot don’t understand much about the Resurrection. Join the club!’

At the time, I didn’t think this remark particularly funny or helpful; now I am convinced that redemption should never be treated with frivolity since its purpose is to give us new life.

When speaking of the Resurrection, an impression of glory needs to be conveyed. We can take encouragement from St Paul 1 Corinthians 15: 20: ‘But now is Christ risen from the dead, and become the first fruits of them that slept.’ We must use our minds to consent to this staggering proposal: it takes us so far away from the cross that we enter a different way of being, for which a leap of faith is essential. We have a future and, incredibly, everything becomes worthwhile because Jesus destroyed death.

The accounts of the appearances of Jesus after the Crucifixion all use the word ‘exalted’: lifted up into a higher form of life. And in all of them, as soon as he is recognised, he disappears, moving away and back into his new existence.

The story of Cleophas and his companion walking to Emmaus (Luke 24: 13-35) is a low-key affair: two discouraged people remove themselves from the recent horrors of Jerusalem for reasons that are not stated. When the stranger draws near, he says, ‘What manner of communication are these that ye have one to another, as ye walk, and are sad?’

Having started with this hint that he is willing to be a sympathetic listener, he encourages them to tell him all. By the end of the story, he exclaims, ‘O fools, and slow of heart…’

He says ‘fools’ more than once throughout the Gospels and it is an expression of grief at the stubbornness he finds even in his closest followers. And then, and not for the first time in their lives, or his, he explains the scriptures to Cleophas and his companion, and they are consoled and ask him to stay with them for a meal (pictured, Caravaggio’s Supper at Emmaus).

‘And it came to pass, as he sat at meat with them, he took bread, and blessed it, and broke, and gave to them. And their eyes were opened, and they knew him…’

For Luke, writing several decades after the event, this is a deliberate reference to the Eucharist, and it is addressed to us. At Emmaus, just before the stranger disappears, the penny drops and the disciples go straight back to Jerusalem. Joining up with the 11 who were at the Last Supper, they would have been able to say, collectively, ‘We know! He is risen!’

God: Suffer little Charlotte to come unto me