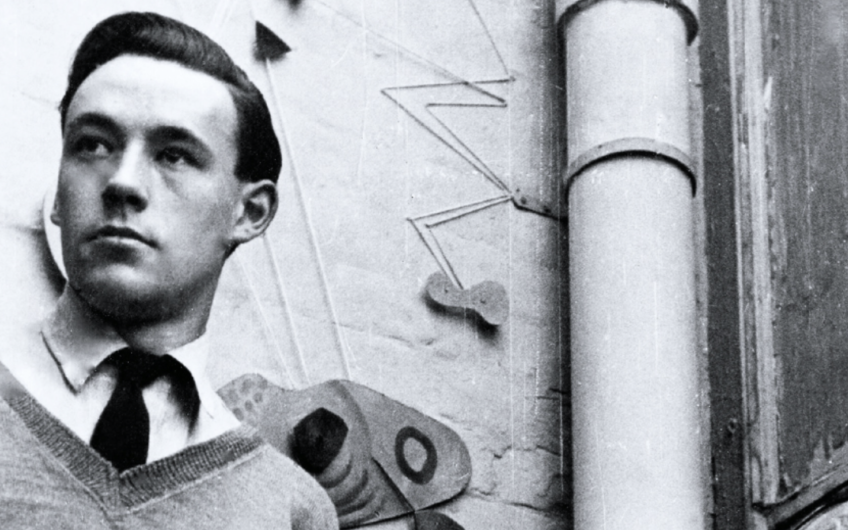 Lucy Lethbridge meets Desmond Morris, the zoologist, painter and author, 93 today, who's about to publish his third surrealist catalogue

The rambling studio behind Desmond Morris’s house in north Oxford is a huge cabinet of curiosities. Amid mountainous piles of books, there are amulets and evil eye protections. On the wall are tribal masks. A large dragon-shaped kite is draped over an armchair.

And, on an easel, there’s a recently acquired copy of a painting by the young Morris, originally done in the early 1950s and destroyed long ago but recreated in Asia from a photograph. It is an eerie, surrealist dreamscape, populated by strange, almost floating, biomorphic shapes – not quite animal, not quite vegetable. Morris is delighted to see it again – a reminder of his long commitment to the surrealist school of which he is the last surviving member. At 93, he is still painting: an exhibition of his work opened at London’s Redfern Gallery in May, at the same time as the publication of his most recent book – a vastly entertaining collection of biographical essays about the surrealists.

His best-known book, The Naked Ape, is about the biological evolution of human behaviour, from our millennia as tree-dwelling fruit-pickers and then as hunters, up to the thin layer of urbanised civilisation we picked up a mere 10,000 years ago. But The Lives of the Surrealists is a celebration of some magnificent aberrations from the dominant hierarchy. Morris was a rebel himself, he tells me.

As a teenager in Wiltshire, lit up by reading an essay by Max Ernst and loathing what ‘humans were doing to each other’ in the war, he started painting images dredged up from his unconscious in the surrealist way. When they were exhibited, there was a letter in the local paper demanding they be burned, which must have been gratifying.

Nowadays, Morris thinks young artists have a difficult time. ‘The chains of tradition have been broken. How can you rebel? Anything goes. I remember something my father always said to me: “Without its banks, where would the river be?”’

Morris, who is an irrepressible polymath, a fountain of conversation and ideas, won’t talk about the art itself. ‘The creative act is irrational,’ he says. ‘The essence of surrealism is that you don’t analyse what you’re doing.’

Yet the surrealists tied themselves in philosophical knots. They had a manifesto and a membership, and the club was always excluding artists for transgressions of rules – which the manifesto said they were supposed to be rejecting. The young Morris went to some lively meetings – ‘There were fiery arguments.’

So, in the book, he concentrates on the artists’ lives and, mostly, their madly tangled love affairs. ‘They were wonderful people to write about. They were reacting to the First World War and I [as part of the next generation of surrealists] was reacting to the Second World War.’

At fourteen, he wrote an essay inspired by the war, called Monkeys with Diseased Brains, which may have been an early indication of the turn his career would take. There was a period of teaching art in his early twenties and some success as an artist (he exhibited in a show with Joan Miró in 1950).

But he didn’t want to compromise and ‘draw advertisements’ to make a living. He had always been ‘obsessed’ with animals. When he wasn’t painting, the young Morris spent hours examining the newts, frogs and toads in the lake owned by his grandparents. He decided to study zoology, writing his doctoral thesis on the reproductive behaviour of the ten-spined stickleback.

Morris thinks we’re all getting too specialised, especially men (and they have been going that way since the development of early hunting methods). But his own career is a striking example of fruitful cross-fertilisation. He has been both a director of the ICA (1966-68) and a curator of mammals at the Zoological Society.

In fact, talking to him, ranging over the huge landscape of his interests in many species, one wonders why these posts aren’t always held simultaneously by the same person. During the 1960s, Morris’s chimpanzee, Congo, exhibited his work at the ICA. Congo specialised in paintings of fan shapes: he had dug deep into his unconscious, found a shape and worked it again and again.

‘It is the essence of art,’ says Morris, who compares this revisiting of an image to his friend Francis Bacon’s screaming popes. Dali, Picasso, Miró... they all visited to marvel at Congo’s art. Dali observed, ‘The brain of the chimp is creative, the brain of Jackson Pollock is ANIMAL.’

Morris, who says his legs are unsteady but otherwise appears remarkably youthful, is prodigiously industrious. Half a century ago, having convinced himself (based on an analysis of the longevity of his recent ancestors) that he was going to die at sixty, he determined that life was too short to hang about. He has since produced hundreds of programmes and books – and is already 30,000 words into his next volume.

Re-reading The Naked Ape is to be reminded of just what an extraordinarily compelling populariser Morris was, and is, of difficult ideas, of the endlessly fascinating theme of human origins and behaviour, and of how he sparked exciting new ways of thinking about what we do – of seeing biological reasons for cultural practices and social structures. Published in 1967, the book sold ten million copies worldwide. The Naked Ape was condemned by feminists for its insistence that men and women had evolved to take on different roles. Men were hunters and women were family-makers. Since then, ideas have shifted, in Western societies in a way that Morris can hardly have anticipated. We have gay marriage, reproductive technology and gender-fluidity.

‘The naked ape is the sexiest primate alive,’ he wrote in 1967. So perhaps it is hardly surprising that our couplings (or ‘pair bonds’, in zoologist’s terminology) are so ingeniously multivarious.

Has he changed his views on the hardwiring? No – he has always maintained that men and women are ‘different but equal’. But, on the whole, Morris thinks that, gender-wise, we are living through a period of ‘excellent readjustment’. The pendulum, he remarks equably, must necessarily swing violently in the opposite direction before it eventually comes to rest in the middle.

He thinks the problem is ‘urbanisation’, in which hunting has been replaced by business. ‘Because of the structure of urban life, men have been unfairly favoured over women.’

In his book The Human Zoo, he even posited the idea that urban-dwelling humans, relieved of the necessity of survival, shared similar adaptations (obesity, for example, or fetishism) to other animals in captivity.

Morris thinks the organising of society should be left to women. ‘Men shouldn’t be allowed into politics at all. This is the women’s department. Men’s role should be restricted to sport and business.’ He is also quite prepared to accommodate all sorts of non-binary variations on gender. Masculinity and femininity are ‘a genetic bias, not an imperative’.

He is an enthusiast for the internet (unlike his friend David Attenborough, who doesn’t have email or even a mobile phone). But he worries about the desensitising effects of internet violence; about games that imitate killing.

When other primates fight, he points out, it’s usually to defeat rather than to kill. The sight of a foe fleeing or in submission reduces the aggression of the victor; whereas, if there is no visible sign of the enemy in defeat, then aggression is ramped up. The biggest challenge is, as always, how we are to rub along together, and learn to live in increasingly populous ‘super-tribes’. ‘One of the essences of the tribal life is mutual aid and cooperation. We’re not eagles and pythons who live on their own and need no assistance.’ But he is optimistic. ‘We have developed as a species intense capacities for cooperation, and in a crisis it’s still there.’

Morris himself, however, despite his decades of communicating with millions, has always had a strong capacity for being alone. That’s where his paintings come from.

As a schoolboy, he once wrote an essay entitled How to Live Alone, nourished perhaps by all those days spent head-down on a home-made raft watching the wildlife in his grandfather’s pond. ‘I’ve always relished solitude,’ he says. ‘Though it’s not a human thing. Humans are sociable beings. I accept I’m an oddity.’

Desmond Morris’s ‘The Lives of the Surrealists’ is published by Thames & Hudson (£24.95)

Morris today in his Oxford studio