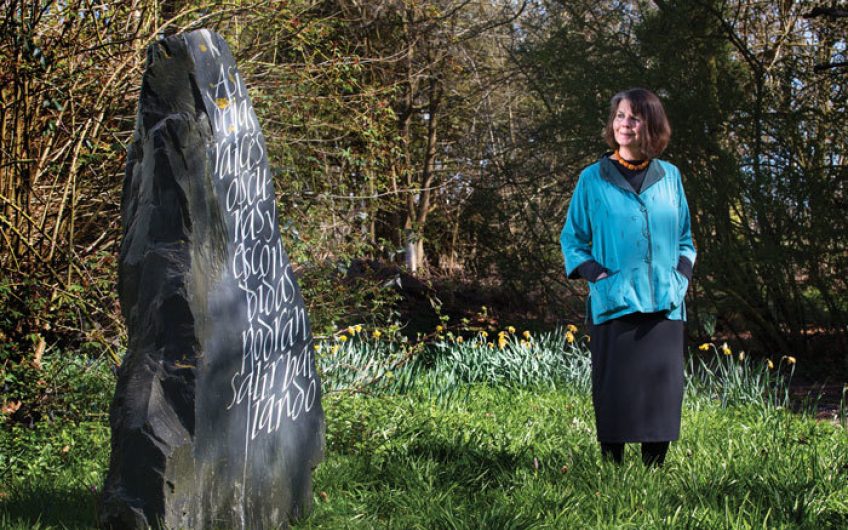 As a bereaved husband is prevented from quoting Byron in a church plaque in memory of his wife, Harry Mount meets Harriet Frazer, who has campaigned for better memorials to the dead.

Harriet Frazer’s dedication to the art of letter-carving was borne out of tragedy. In 1985, her stepdaughter Sophie Behrens, a 26-year-old writer, took her own life. After her struggle to commission a suitable tombstone, Frazer found herself setting up Memorials by Artists, which creates beautifully lettered monuments to the dead.

‘We asked a sculptor friend to come up with a design for Sophie,’ says Frazer, 75, who stepped down in 2015 after 27 years running Memorials by Artists. ‘We showed it to the vicar and he said no. It didn’t pass the rules and regulations for the diocese. You were only allowed scripture or well-known hymnal words.

‘I wouldn’t have started the whole thing if we’d got what we wanted to begin with. But if you’re angry, you start doing things.’

Fired by anger, Frazer persevered and ended up commissioning a heart- stopping tombstone from the sculptor Simon Verity for her stepdaughter. The stone is inscribed with a sculpted bird, flanked by bunches of grapes, echoing Sophie’s love of wine and Italy. It stands today in the churchyard of St Peter and St Paul, in Salle, north Norfolk.

From this acorn grew Memorials by Artists, which has now put 5,000 people in touch with artists to create unusual, stirring memorials for their loved ones. The company has expanded to encompass other letter-carved works for all occasions, including birthday presents, architectural inscriptions and house signs. It is now run by the Lettering and Commemorative Arts Trust, which encourages letter-carving through apprenticeships, books and workshops.

In 2013, the trust opened an office, shop and gallery devoted to letter-carving at Snape Maltings – the arts centre, famed for its concert hall, founded by Benjamin Britten. There are three shows a year. At present, there’s a new show of the work of Michael Renton (1934–2001), a master of lettering in wood, stone and ink.

It was a strange career change in middle-age for Harriet Frazer, who had been working in a Suffolk job centre when letter-carving crashed into her life.

She claims to be no good at the actual carving side of it all. ‘Although I did enjoy playing post offices as a child – stamping things,’ she says in her diffident way. But her lack of knowledge about the whole world of letters and tombstones was, in fact, a bonus.

‘I’d never heard of the Crafts Council and Eric Gill,’ she says, ‘but it was useful to be ignorant. It meant I could see what people felt when they came to it all new.’

It also meant she could look upon traditional epitaphs with a fresh eye. ‘I remember thinking, “In loving memory”…’ she says, ‘well, that’s all right, isn’t it? And then thinking, “No, not really”.’

In fact, letters do run in her blood: her father was Heywood Hill, who founded the eponymous Mayfair bookshop in 1936. Whatever the reason, letter-carving struck a deep chord with her.

‘It was unlike anything I could imagine myself doing,’ she says. ‘It was amazing. It suddenly seemed to make sense. I found I could really help people. I could help them negotiate the rules of memorials. I could match them up with the artists. And there was this extraordinary untapped demand. It began to take off.’

Britain has had an exceptional collection of tombstones since the Middle Ages. There are some delightful 18th-century epitaphs in twirly italics in Snape churchyard, next to two of Frazer’s recent commissions; another commission is engraved into a church window at Snape. It was only after the First World War – and the melancholy flood of memorials it brought – that dioceses began to grow so prescriptive about tombstone design and lettering.

Memorials by Artists has revived the art of original tombstone design. Among the thousands of works commissioned is the film-maker Derek Jarman’s simple slab of riven Welsh slate, inscribed with his signature. Another in Somerset, in Cornish slate, is to Auberon Waugh – ‘of Combe Florey – writer and journalist’ – with a cheering variety of letterforms, reflecting Waugh’s mastery of the written word.

Never say ‘font’ to a lettercutter, by the way. I said the dreaded word to one, working in the Snape Maltings gallery. ‘Not font,’ he barked. ‘Letterform.’

Portland stone, Purbeck stone, York stone … Britain is blessed with such a rapidly changing geology that the available variety of colours and surfaces in a churchyard is near-infinite.

Not quite as infinite as the choice of inscriptions – one in the eye for that dreary Norfolk vicar who vetoed Sophie Behrens’s initial tombstone. Recent Memorials by Artists inscriptions include a quote from Robert Louis Stevenson’s own epitaph for himself: ‘Here he lies where he long’d to be; Home is the sailor, home from sea, And the hunter home from the hill.’

Beautifully designed tombstones don’t come cheap, ranging from £2,000 to £7,000. Given that a plain slab of unengraved, masoned slate starts at £1,000, that doesn’t seem too much to pay for a near-permanent piece of art that fulfils one of the most vital roles of all: remembering the dead.

Much of Frazer’s work has involved discussing designs with the bereaved – in meetings held at her home near Snape, until the move to the Snape Maltings office. ‘It can be exhausting,’ she says.

Most moving of all are the memorials to children. Frazer, with Hilary Meynell, has written a practical guide for the memorials to young people, children and babies. The inscriptions are nearly unbearable to read. ‘Play, dance and blow bubbles for me’ is the line to a 10-year-old girl, dotted around with little bubbles carved into the stone. To a 19-year-old girl, the simple inscription reads, ‘We wish she could have stayed longer.’

A second memorial to Sophie Behrens hangs on the wall of Harriet Frazer’s farmhouse. The black stone disc features a jug, bursting with flowers, surrounded by words from Sophie’s last letter to her family: ‘I have thought that life was rich and miraculous.’

How right, then, that past lives should be remembered so richly and miraculously.