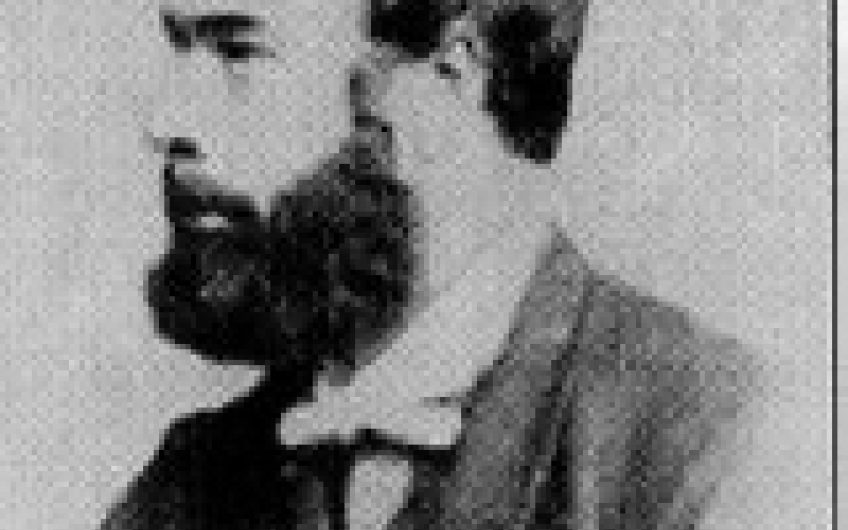 150 years ago, in January 1870, Francis Kilvert began his diary - the finest ever insight into rural living, says Mark Bostridge

Francis Kilvert, the Victorian clergyman famous for his diary of rural life in the Welsh borders and Wiltshire in the 1870s, possesses such an endearing and affectionate personality that it’s sometimes difficult to believe that he ever felt hatred or strong dislike for anyone.

However, there was one type of individual, increasingly common with the spread of the railway network across Britain, who aroused his dismay and whom he treated with contempt - and that was the tourist.

In a rare outburst, he expresses his horror at coming across a pair of them, complete with staves and shoulder belts, at a favourite spot, high up in the mysterious Black Mountains – the magnificent ruined nave of Llanthony Abbey.

One was ‘postured among the ruins in an attitude of admiration… discoursing learnedly to his gaping companion and pointing out objects of interest with his stick.’

‘Of all noxious animals,’ Kilvert continues, ‘…the most noxious is a tourist. And of all tourists the most vulgar, ill-bred, offensive and loathsome is the British tourist.’

There is then a certain irony today, when walkers and ramblers – to adopt friendlier terms than ‘tourist’ – pursue a Kilvert Trail in search of places mentioned in the diary.

There are, strictly speaking, two Kilvert ‘countries’ – the area of Radnorshire surrounding Clyro, where Kilvert spent seven years as a curate, and the more sedate backdrop of the Wiltshire countryside at his family home outside Chippenham.

It is the Welsh Border country that has captured the imagination of readers of the diary ever since it was first published eighty years ago. It is an area of ravishing beauty, of rolling hills and brooding mountains, of secret little valleys and, in Kilvert’s time, impoverished cottages and hill farms –inhabited by local characters like Old Hannah Whitney with her ‘ancient beauty’ and supply of folklore, and John Morgan, the ‘old soldier’, who fought in Wellington’s army during the Peninsular War.

Kilvert, who died 140 years ago, frequently walked 20 miles a day. He did so without maps, leaving him liable to get lost and dependent on asking the way, sometimes with limited success (‘There is no way…you will never find it’, a farmer once told him unhelpfully after Kilvert failed to locate his home track).

He certainly liked nothing better than a deserted road. ‘I had the satisfaction of managing to walk from Hay to Clyro by the fields without meeting a single person’, he wrote in 1871, something he regarded as ‘a great triumph and a subject for warm self-congratulation’.

Even today, though, the sparsely populated nature of the region means that one is still more likely to encounter sheep than people. And the countryside, quiet hamlets and remote churches of a low, squat design that Kilvert knew have changed so little and retain much of their former character.

Take Clyro itself. ‘Beautiful Clyro rising from the valley… dotted with white houses and shining with gleams of green on hills and dingle sides.’ Bypassed in the 1960s by the A438, the current population of the village is less than it was in Kilvert’s time (when it stood at 842) and peacefulness descends as one walks the main street.

St Michael’s, the 12th-century church, extensively rebuilt in the 1850s, is much as it was in Kilvert’s time. Whenever I sit in the churchyard, with its avenue of yew trees leading to the lychgate, I think of that wonderful moment in the diary on Easter Eve: the graves, decorated with flowers, are described as looking like people asleep in the moonlight, ‘ready to rise early on Easter Morning.’

In Clyro, Ashbrook House, Ty Dulas in Kilvert’s day, is the solid, grey-stone house at the heart of the village where Kilvert had his lodgings. He occupied his own downstairs sitting-room and a first-floor bedroom. He didn’t mix socially with the only other lodger, a solicitor’s clerk, partly because of his detestation of tobacco smoke. Directly opposite was the Swan Inn (now the Baskerville Arms) where men lying by the roadside all night sometimes disturbed Kilvert with their ‘cursing, muttering and vomiting’.

Further along, on the other side of the main road, is the village school where Kilvert taught the parish children their three R’s, and where he fell for the charms of ten-year-old ‘Gipsy Lizzie’.

On the road out of the village lies the Baskerville Court Hotel. Formerly known as Clyro Court, this baronial-style house, with its impressive ceremonial staircase, was built by the local Baskerville squire and was the scene of the croquet and archery parties attended by Kilvert.

As the poor curate, his status was ambivalent. He mixed socially with the gentry and shared many of their political views, while despising their love of field sports (‘What a fine day it is. Let us go out and kill something’ is the diary’s mocking attitude).

Yet his lack of means and limited prospects of preferment were insurmountable obstacles when it came to presenting himself as a prospective husband to the daughters of the grander families.

It was his rejection by Daisy Thomas, daughter of the vicar in Llanigon, that caused Kilvert to leave Clyro in 1872. He returned to Wiltshire to be his father’s curate for several years.

Eventually in 1877, after a brief period as vicar of a neglected parish not far from Rhayader, he accepted the living of Bredwardine in Herefordshire. For the first time, Kilvert had a home of his own, with 20 acres and four servants, a Regency vicarage which still stands, romantically situated overlooking a river.

At last, too, Kilvert had found a wife. He was married to Elizabeth Rowland, who he had met on a trip to Paris three years earlier, in August 1879.

But a fortnight after his return from honeymoon, Kilvert was taken ill and died on 23 September, from peritonitis. He was 38.

His grave is in Bredwardine churchyard. If you visit, you may notice that Kilvert’s widow is buried at some distance from her husband. In the intervening years between Kilvert’s death and her own, two sisters, the Misses Newton, who had been very fond of their vicar, had been buried on either side of him, leaving no space for poor Mrs Kilvert.

You may also notice the curious prescience of the words, from the Book of Hebrews, engraved on Kilvert’s white tombstone: ‘He being dead yet speaketh’.

January 2020 marks the hundred and fiftieth anniversary of the start of Kilvert’s Diary. As Alan Bennett says, ‘Kilvert has touched and delighted (and mildly shocked) readers of his diaries ever since they were first published. New readers are in for a treat.’

‘When we read Kilvert today, we can imagine ourselves restored to a vanished Arcadia, to a world of beauty and peace, where only the threshing machine and steam engine puncture the countryside’s silence, to a society where the ties of community are still interdependent and strong.’

I can think of no better literary antidote to the troubled, messed-up times we live in.