Get on your bike! By Harry Mount 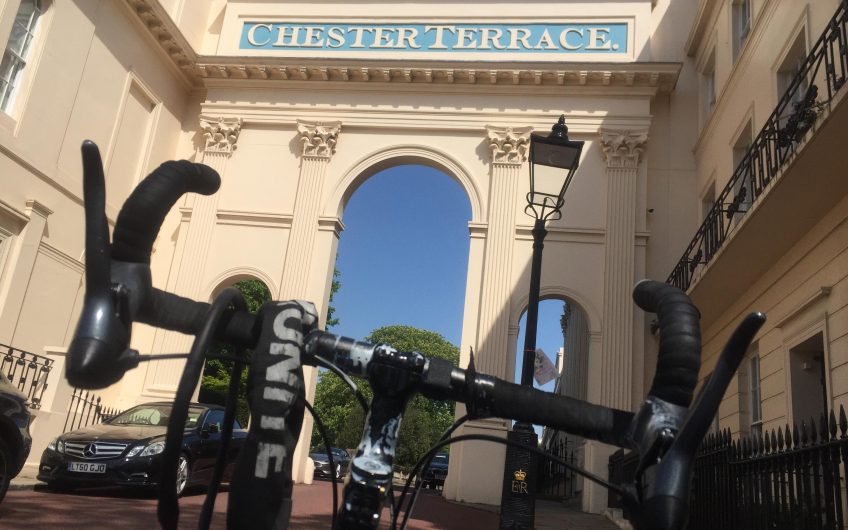 The best view in the world – Chester Terrace, Regent's Park, seen from over the handlebars
View Full Size
1
of 1

New figures show biking boomed under COVID. Harry Mount was one of the millions who biked to work every day during the pandemic

The Mayor of London, Sadiq Khan, is reconfiguring the city's roads to accommodate a boom in biking during the post-lockdown period. And now the Government is backing the move to two wheels with grants for bike repair and subsidies on e-bikes.

No wonder. The bike is the ultimate post-lockdown transport. I biked to Oldie Towers every day during lockdown. For all the sadness and tragedy of the epidemic, biking has been unaffected by it. If anything, my journey to work has been quicker because of the lack of cars. You inevitably self-isolate on a bike and, during these rough times, the only measure you have to take is to give people a slightly wider berth when you're overtaking.

A small silver lining of the catastrophe is that more people took up the greatest form of transport known to man - the bicycle.

10 years ago, I got rid of my car - not for green reasons, I’m afraid, but to save time and reboot my emotional well-being. I found I was spending all my time sitting stationary in a metal box in Kentish Town, north London, where I live.

I’m all for cars – and I love driving them around deserted roads in Pembrokeshire, where my parents have a cottage. I would buy a car tomorrow if I were the only motorist in London. As Martin Amis once wrote, the innate agony of urban car journeys comes from the knowledge of how quick they would be if there were no other cars around; and how slow they are because there always are other cars around.

And so now I rely on the Holy Trinity of Transport: bikes, trains and hire cars. I have moved onto a heavenly plain, where I’m in a bad traffic jam about three or four times a year. The rest of the time I’m either driving through remote, empty parts of Britain, sitting reading on the train or staring out of the window – or, if I’m in London, biking everywhere.

The marvellous, unique thing about biking is that journeys take the same time, whatever the weather, whatever the traffic. I have now been editor of The Oldie magazine for five years. I must have done my 2.7-mile journey to and from my Fitzrovia office over 1,000 times. And yet it’s never – in wind, rain or snow, in gridlock, during a street protest or a terrifying global epidemic – taken me more than 20 minutes to do the journey.

Very occasionally, when my bike – and both my back-up bikes – are out of action, I have to do the same journey by Tube or taxi. It has almost always taken more than 20 minutes, and is never as cheap as my bike.

The same joys obtain on my journeys across the country. For a decade before I got the Oldie job, I was a freelance journalist and I relied completely on the Holy Trinity of Transport (with the occasional plane to Belfast, Newquay or Glasgow), and was never once late for a single job.

I rarely needed to hire a car. For all the appalling cuts Dr Beeching made to our rail network, there are few towns in Britain that can’t be reached via a train and a five-mile bike ride: five miles tends to be my upper limit.

By train and bike, you see Britain up close, its best bits and its worst bits. Because train stations are in the centre of our towns and cities, unlike our hideous airports, you arrive right at the heart of things. Come out of Edinburgh Waverley and you are in the shadow of Princes Street and Edinburgh Castle. Peterborough Cathedral is a stone’s throw from the station.

It is in biking away from these stations, in the ancient heart of town, that you slowly see the developing, outer onion layers of British settlements. The medieval parish church and the High Street near the station give way to Georgian houses, which in turn give way to Victorian terraces and the Edwardian and modern fringes of town before you pedal past fields and woods.

Wherever I go, I plot my route first on Google maps. I put in the walking option: wherever a person can go, a bike can go, too, with all due respect to pedestrians, the kings of the transport food chain. And so I chart my way through the backest of back routes to my rural destination.

Biking from Northampton Station to the Inigo Jones house owned by my predecessor as Oldie editor, the late, great Alexander Chancellor, I went mostly by the empty, enchanting, largely arrow-straight Grand Union Canal. The 7.9 miles raced by on the flat towpath.

Where you hit hills on a bike, you really appreciate the contours of the British landscape that you blithely ignore in a car. I’ve biked all around the mostly quite easy-going Cotswolds. The most difficult hill I’ve encountered recently was the dead straight, unrelenting one that is the High Street in Burford – imaginatively called The Hill.

Things have got a little more difficult for the train-and-bike traveller in the last few years. There’s been a welcome boom in bicycling in the last decade. But in all my train-and-biking days, I’ve still never seen a guard’s van that’s full to bursting. Sadly, in these health-and-safety, bleeding jobsworth days, I have had my bike refused on trains because I haven’t got a bike reservation – even when the guard’s van is empty. Newer trains often provide only two piddling bike spaces squeezed into a carriage, where you have to hang your bike from the front wheel high on the train wall. These spaces, too, often have to be reserved.

So my planning for train-and-bike trips now involve D-Day levels of detail. I will always book a bike on a train ahead of time to beat the jobsworth brigade. Or, if I haven’t got time to book, I select my fold-up bike from my back-up fleet.

No jobsworth can stop you bringing a foldie on a train. You can always find a spot to stow them: my little trick is to put them in the first class carriage – invariably there’s room there – and then stroll down to standard class.

And foldies are pretty good for short distances. Last August, I went to York Races with the foldie. Oh, what a joyous ride to York Racecourse: first past the Roman walls, the Minster, its neighbouring Roman column and the statue of Constantine, proclaimed Roman Emperor in York in 306 AD. Then round the medieval, winding streets of York before biking on to the races – where I drank my bodyweight in pink champagne and won £240 thanks to a genius tipster. The perfect day: I biked back to the station on booze-powered wings.

What about the weather, I hear you anti-bike merchants cry? Well, in fact, London has less rainfall than Rome every year. And some meteorological egghead has done research that shows, if you do a 20-minute commute each way to your office every day (exactly my routine, incidentally), you will only get soaked through five times a year.

That completely tallies with my experience. Very occasionally, I get soaked through. But, usually, you get a pretty good idea every morning if there’s going to be a downpour and I pack my rain cape.

The other hazard is heat. I’m afraid that, in heatwaves, I strip to the waist and put my shirt and jacket inside a bag, slung from the handlebars. Yes, I look silly. A three-year-old pointed at me during this summer’s heatwave near my flat and just said, with a broad grin widening on his face, “Look, Mum! Naked.”

But one of the million and one advantages of biking is that you’re moving in a different universe from pedestrians. Three-year-olds may abuse you; street urchins may swear at you; but you just sail on serenely. Five seconds later, they’re in a different world from you. That doesn’t apply to the idiot boy playing the xylophone on the train next to you (that actually happened once – I blame his progressive mother, encouraging her prodigy’s innate lack of skill); or the road-rager stationary on the M4 in the adjacent lane.

Most of all, though, it’s the endorphin rush that has me addicted to biking. Without fail, hungover or ill, 15 minutes into a bike ride, I will feel a lift in mood; I quite often find myself singing aloud – again, who cares if people think you’re silly; five seconds later, they’re out of sight, out of mind. This morning, biking to work along the Outer Circle, I found myself singing Moody Blue, a 70s classic by Elvis to the trees.

Bikes – and trains, too, if they’re free of idiot, xylophone-tinkling youths – are a magical remove from the daily grind. Cars – unless they’re on those mythical empty roads dreamt of by Martin Amis – are an intensification of the daily grind. When you’re driving, you can feel the low-level tension that stalks our urban streets. To go on a long motorway journey is to be stuck in a tense, crouching position, arms rigidly glued to the steering wheel ahead of you, the view of grey tarmac unchanging, the views of Elysian Fields to your left and right tantalisingly out of reach – unless you want to career into the central reservation.

I have taken the train to Swansea from Paddington, changed, and taken the little train on to Pembroke for 35 years. And yet I never tire of staring out of the window: at the White Horse at Uffington far away to the south; at Newport Castle; at the Towy estuary beneath Llansteffan Castle, and at the River Towy which flanks the railway all the way to Carmarthen.

I never tire, either of the view from my bicycle seat. And I never envy the drivers sitting at the wheel as I calmly race past their stationary metal boxes.