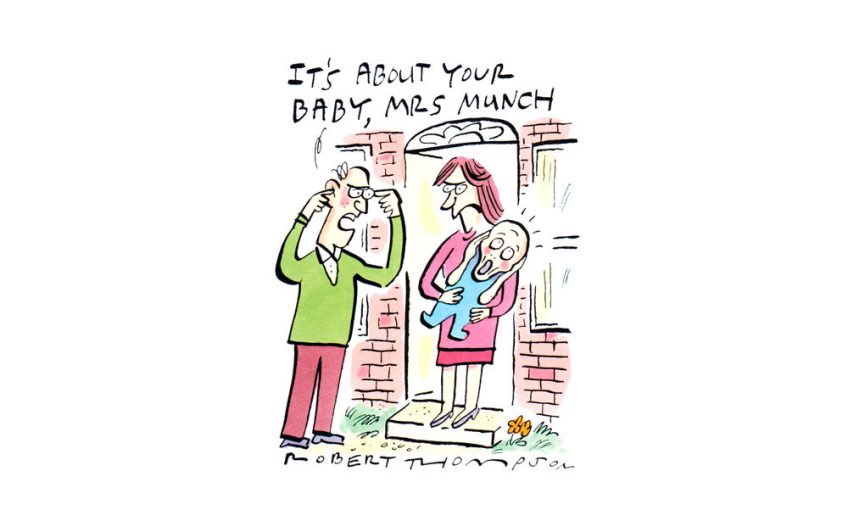 Cartoonist Nick Newman is on the search for the universal cartoon that would be funny whatever the caption. Oldie cartoons have rich universal themes, writes Harry Mount

When we were compiling The Best of the Oldie Cartoons recently, my friend David Abberton spent many hours, squirrelled away in the Oldie archives, mining for comic gold. As part of his studies, he conducted a scholarly investigation into the established themes of cartoons.

‘The most obvious trope is the Desert Island but there are others,’ David says, ‘In no particular order, these are wife-hating; the grim reaper; aliens; cats; the guru on the mountain top; Mexicans; Heaven; mobiles and “How’s My [insert theme]”. There are honourable mentions for Munch’s scream, giraffes, igloos and Excalibur (usually emerging from a lavatory).’

Why are these themes so universal? Part of the reason is their familiarity: we're so familiar with Munch's scream that a clever play on it, like Robert Thompson's (pictured), gets added chuckles. Or perhaps those familiar images are themselves innately funny.

Who knows? The great Barry Cryer, who's just turned 85, says, ‘As somebody once said, analysing comedy is like dissecting a frog. Nobody laughs and the frog dies.'

The thrill of the steeplechase - Robert Bathurst