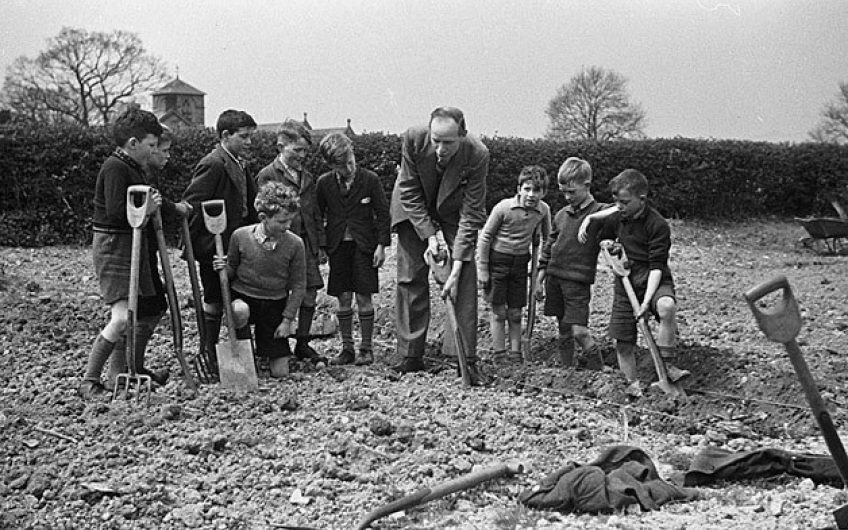 When war became inevitable my mother, being French, stored vital necessities to last out the event: candles, matches, tins of sugar, salt, corned beef and sardines, jars of honey, drums of olive oil and of course, lavatory paper - Bronco: '300 leaves for the bigger wipe'. She bought so much that we were still using it in the 1960ies. Sophie, our cook, preferred the Daily Mirror, trimmed into squares for use - the pictures of the King and Queen and of Mr. Churchill being carefully cut out first.

Terrible things were happening throughout the world: invasion, terror, starvation, mass murder; in London, just audible, was the thump, rumble and moan of the Blitz, which eventually killed 30,000 people, of which 10% were children; nearer at home, when Colchester was bombed at night, the flashes lit the underneath of the clouds, the beams of the searchlights were like long moving fingers; month by month names ticked up for the village war memorials - but, for one small boy at least, it was an era of adventure, companionship and bustle.

Some of the parishioners must have suffered, but I never noticed it. No one seemed to be hungry: allotments and cottage gardens were always full of spuds and cabbages and onions and beans and peas and carrots and goosegogs and apples and rhubarb and the vile spinach; there were rabbits fattening in hutches and chickens murmuring contentedly in coops and maybe a goat and sometimes a household would have a pig: our allocation was two pigs per year - Benito and Adolf they were always called. They grew fatter and fatter until suddenly, bam! they vanished: then horrible shapes in hessian bags would hang from hooks on the kitchen ceiling. Adolf and Benito would appear again, much smaller than they'd been a fortnight before. Food was made in homes and swapped: jam for cakes, tarts for pies, lard and dripping for custards. Women would glean after harvest for corn - mostly for their chickens.

Every morning the village and parish women would walk uphill to our house, each with an empty milk churn and a flat battery: they'd return home with a quart of milk and a battery recharged by our diesel engine which had pumped all night to charge about 70 batteries - the sole source of electricity for most of the cottages. As well as being almost self-sufficient in food there were local village services: the doctor and the nurse/mid-wife (she also 'bathed the gentry'), a police-station complete with blue lamp, the builder/undertaker, a shop, a pub, the school with two teachers, a parson and church choir. The church and village hall were continuously busy: whist drives, jumble sales, meetings of the WI, the scouts and cubs, the British Legion, the Village Produce Association and many others, there were banquets in the evenings, harvest festival feasts [hokeys], dancing, parties, and parish meetings. We had a football team. There was the Home Guard: our old gardener was a member and I own the Cromwellian halberd with which he had been armed as weapon against the invading German machine-guns.

It was very much a matriarchal society. The squire's wife or equivalent would rule the roost . The Women's Institute organised most of the activities. My mother's main tasks were to drive an ambulance for the nearby American hospital, and a tea-&-wads van around the searchlight-with-ack-ack [anti-aircraft guns] batteries.

My father was in SOE, specializing in sabotage in occupied countries. Our house was a resting place for many of SOE's agents, staying with us between their perilous missions abroad. We had French and Jews and Scandinavians and Balts and Slavs and a great medley of others: I liked the Poles best, they seemed to tolerate children and some were interestingly eccentric. The other child-friendly people were the Italian prisoners-of-war. POWs worked in the fields: the Germans stolidly , silently and with surly resignation; the Italians laughed and gave the children little carved toys and were merrily insubordinate to their guards.

All the community worked, we were all in it together, male and female, rich and poor, old and young. Even as young as 4 and 5 we children were useful: always busy, busy, busy; always needed, often part of a team. Team-work was particularly important during the harvest, especially during the dismantling of the stacks of sheaves into the threshing machine - driven by a vast steam engine.

There were boring jobs: turning the handle of the milk churn, a barrel on a spindle, for what seemed hours until the slosh-slosh-sloshing changed to a thump-thump-thumping; peeling spuds and shucking beans; carrying logs to fill the log baskets. There was routine work: going along the hedgerows to pick hips, to make rose-hip syrup for the children in the towns; being sent out into the fields to collect 'window', anti-radar silver strips discharged by aeroplanes (most exciting were the window with black backing, they came from the enemy); helping in the stables and cow shed - the cowshed was more fun as the cow-pats splattered amusingly when stamped upon.

There were exciting things to do, finding treasures: digging up golden potatoes, collecting the clutches of the chickens' eggs in the straw nests of the chicken coop. I liked particularly my daily chats with Benito and Adolf in the cosy gruntment of their sty, I'd have to tip their swill into their trough [delicious, it was, oat-mealy and warm, occasionally I would scoop up a finger-full of it and swallow].

There were terrifying things to do - putting on gas-masks and being overwhelmed with claustrophobia; claustrophobic also was the little unlit tunnel in the village school, along which we would have to creep, into the small box-like air-raid shelter. Most frightening was night time: it was in the dark that the war became alive – the sounds: the burble over-head as the doodle-bugs and V2s flew on their murderous way to destroy London, the coughing of engines as the wounded Flying Fortresses lurched through the sky back to Earls Colne aerodrome, the 'drum-drum-drum' distinctive of the German bombers, the clank and puffing of the trains at Earls Colne railway station, often unloading bombs for the Flying Fortresses

Worst of all was the air-raid siren in Halstead, the banshee howl as if the whole town was letting forth a wail of terror. The after-moans of the 'all clear' were little better.

Horses dominated the whole way of life - draft horses, such as those of Thomas Moy the coal man; delivery horses, Mr. Partridge the baker with his pony cart; hunters and hacks, ponies for the children. When my mother went shopping she'd go in the pony trap: noisy - the clip-clopping of Polly's hooves, the gritty grind of the metal tyres on the road, the jingle-jangle of the crate of empty beer bottles being returned to Cook's the brewers, the panting of Rags the pie-bald mongrel, who lolloped under the trap, on the look-out for Halstead canine ladies.

And then: the men - most of them - returned to the village, and life carried on, and strangely, it did not seem any better; there was food rationing and unemployment and 1946 was a bitter winter and the community spirit was dwindling. But on every Armistice Day a huge squad would march into church, and above the tramping of boots you would hear the tinkle-tinkle of a multitude of medals on the chests of the warriors who had come home.

The community spirit is back! Although The Five Bells is out-of-bounds for normal business it is now the HQ of a volunteer-run parish operations room: supervising the distribution of essentials to the old or frail, issuing information to parishioners on everything important from refuse-collection dates to shops and businesses still active, and monitoring the activities of over 70 volunteers; the village shop and 2 local farm shops now do home-deliveries; though the C of E has decided that churches should be shut the church porch is a centre of distribution: parishioners leaving food and plants and books and parcels for relaying or collection. Someone has had the brilliant idea that the abandoned gravestones in the church-yard be adopted, and each grave should have flowers regularly put upon it. Until recently I knew more people in that church yard that those alive in the village: now, my wife and I in our 80s, though living in purdah, have met new friends - if only via the e-mail and the church porch.