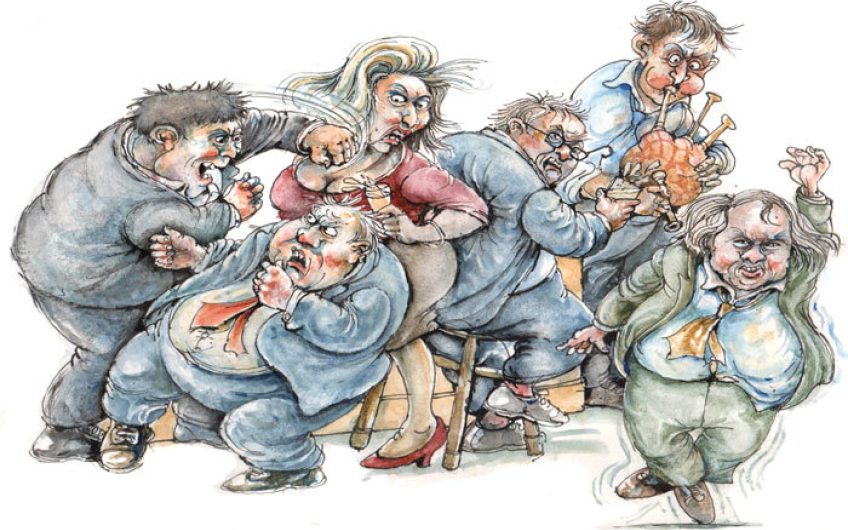 Past midnight and the dimly lit bar in Brighton’s Grand Hotel was thronged with high-spirited journalists. It was the second night of the Labour Party Conference and party leader Neil Kinnock and his local Welsh male voice choir had just finished belting out songs from the Valleys next door.

His acolyte Alastair Campbell, then political editor of the Daily Mirror, and a yet-to-be-reformed boozer, was multitasking. Appropriately lubricated, he was playing the bagpipes and simultaneously attempting a reel.

Behind him, glass of champagne in hand, was an equally well-refreshed Keith Waterhouse, whose jerking and knee-bending suggested he was rehearsing Riverdance in advance of its invention at the Eurovision Song Contest in Dublin five years later.

In front of the musical duo, dozing on a bar stool, was Anthony Bevins, political editor of the Independent.

Standing at the marble-topped bar was right-wing columnist Bruce Anderson, deep in conversation with Eve Pollard, aka Lady Lloyd, then editor of the Sunday Mirror.

Arriving thirsty from Kinnock’s singsong, future Oldie columnist John Sweeney and I edged up to the bar in search of refreshment. I spotted the statuesque Miss Pollard and, breaking away from Sweeney, attempted to introduce myself.

Bruce Anderson, dazed after more than a whiff of the cork, took exception. ‘Fuck off, potato head,’ he said sweetly, referring to my Hibernian roots. I didn’t reply, but simply whipped off his thick-lensed spectacles and put them in my jacket pocket. Blinking owlishly, Bruce swung a wild punch in my general direction, but missed and instead struck Miss Pollard’s protruding embonpoint. As she staggered back the noise woke Anthony Bevins from his semi-slumber further along the bar.

‘Anderson, you cunt,’ he roared as he accelerated towards Bruce. Arching his elbow he tried to deliver an uppercut. He missed. Poor Eve’s chest was again the unfortunate recipient. Bevins began to wrestle with the myopic Anderson. Leaping into space like a blubbery Butch Cassidy and a skinny Sundance Kid, they toppled over onto Campbell.

Domino-like, the bagpiper fell back. But his descent was temporarily halted. He had made contact with Keith Waterhouse, whose uncoordinated, energetic jigging was immediately brought to a halt .The author of Billy Liar and Jeffrey Bernard is Unwell tumbled to the floor. He was followed quickly by Campbell, then Anderson, then Bevins.

The bagpipes continued to wail as the foursome rolled about the Axminster trying to disentangle themselves. I felt a hand in my jacket pocket. It was Eve Pollard. Had my romantic luck changed? Alas, no. ‘Give me Bruce’s glasses,’ she snapped. She found them in my pocket.

Sweeney suggested it was time we made a discreet exit. So we did.

Afterwards I discovered that Bruce had at some stage written derogatory remarks about mixed marriages. Bevins had been married to a lady from India. He had nursed a grievance until that eventful night in the Grand Hotel.

This Wild West-like recollection from 1989 is not to celebrate the joys of booze-fuelled brawling among members of the Fourth Estate, but it does underline the depressing reality of modern-day Fleet Street.

No one drinks anymore. No one goes out any more. No one meets people any more. Modern practitioners with their Pret a Manger salad lunches and their five-a-day infusions at their work stations, their forensic reading of Hello, OK and Closer, sit from dawn till dusk at their winking computer screens.

All the national newspaper newsrooms are now filled with Terracotta Armies of earnest young men and women rewriting magazine articles and churning out a grim mince of show business and celebrity stories about people they don't know and will never meet.

And as for drinking – it’s now confined to the canteen tea urn and the Styrofoam cups depressingly poised above the bubbling water cooler near the chief sub’s desk.

There was an unexpected postscript to the Grand Hotel incident. Two years after the late-night seaside punch-up Pollard was the newly installed editor of the Sunday Express. Unbeknownst to her I had been hired as a feature writer by her new deputy, Craig McKenzie. Deal done, he introduced me to Eve. As we shook hands she peered at me with a quizzical look and asked, ‘Haven’t I seen you somewhere before?’

Hell is... being trapped in the back of the plane, still glued to the tarmac