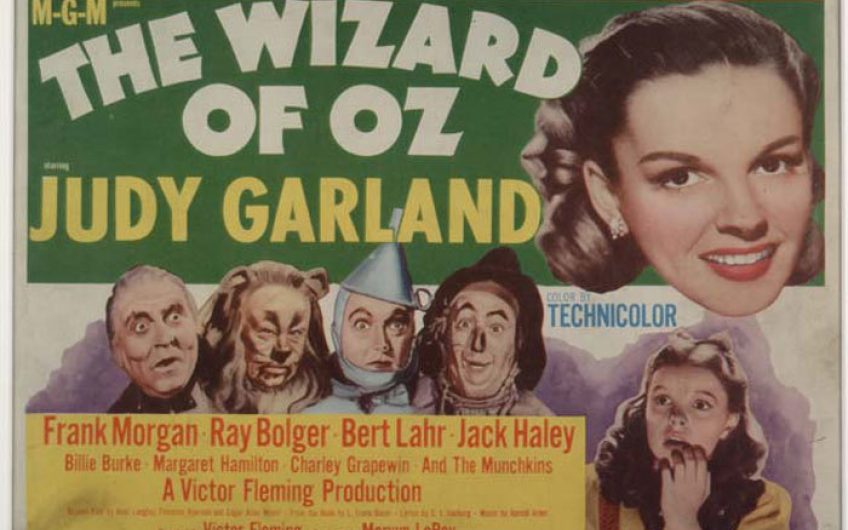 I could write a book about my personal connections with almost everyone connected with this film. Things I’ll bet you didn’t know. Like, for instance, that Billie Burke, who plays Glinda, the Good Fairy, had been Mrs Florenz Ziegfeld? Or that Bert Lahr, who plays the Cowardly Lion, has a son, John Lahr, who is the drama critic of the New Yorker magazine? Did you know that I worked with Judy Garland when she was eight? She was in an act called The Gumm Sisters. Mama Gumm played the piano, two sisters stood behind the piano and Judy Gumm stood atop the piano. I was the headliner. I didn’t think you’d believe that so I’m sending an ad from a Chicago paper along with this review. The ad called them ‘The Glumm Sisters’. I suppose it was that ad that made them change their name to The Garland Sisters. I was appalled that an eight-year-old kid, even one that good, was exploited so cruelly. We did four, five or even six shows a day. Judy was in the theatre every day all day. She never saw daylight nor did she get a chance to meet other children. I, by the way, was 14. However, I wasn’t exploited by pushy parents; I ran away from home. My parents disapproved. Nice Jewish boys don’t run away.

The best song from a first-class score, ‘Over the Rainbow’, is sung at the beginning of the film by Judy Garland. She didn’t like the song, said she didn’t want to sing it. She was backed up by the studio head, Louis B Mayer, who said he didn’t like it either. Harold Arlen, who had composed the music, was outraged. He said that either the song stayed in or he would withdraw his entire score. The song stayed in.

This may be treason but I didn’t like the film. Judy Garland was superb, Ray Bolger as the Scarecrow was good, as was Jack Haley as the Tin Man, and Bert Lahr’s performance as the Cowardly Lion was pure gold. However, there was a lot of overacting, especially the Wicked Witch. She didn’t have to be that wicked. There was one thing I loathed: anything in the film to do with the Munchins. Apart from that nauseatingly twee name I found it disturbing and deeply unpleasant to have what seemed like several hundred midgets all being so god-damned cute I wanted to kill them.

One more thing I’m sure you didn’t know, nor did I. I had let my brother, Jerry, know that I was to take part in a memorial concert to Judy Garland. Jerry emailed me that he had very nearly married Judy Garland. They were ready to elope to Las Vegas when Judy decided she should let the studio, MGM, know what was happening. Louis B Mayer told her that if she did any such thing, he’d make sure that she’d never see the inside of a film studio again. Just think, I could have been Liza Minnelli’s uncle.