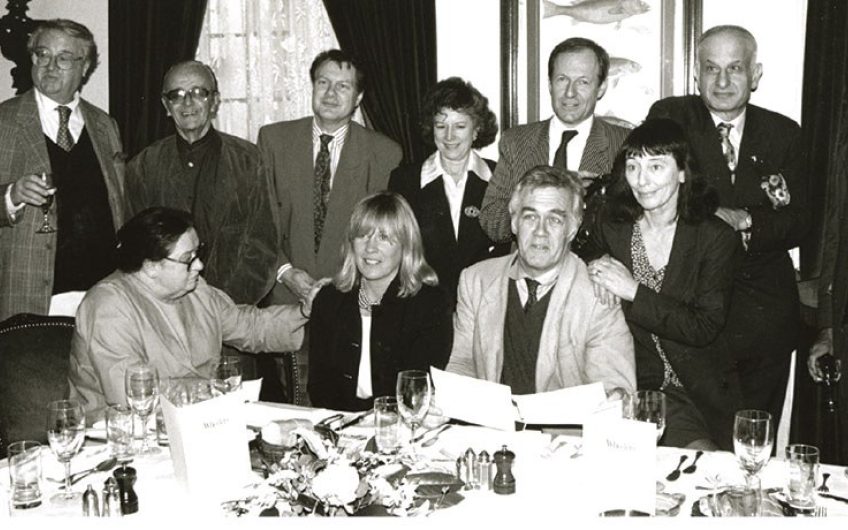 Valerie Grove, our radio reviewer since the first issue, recalls the birth of The Oldie and the three joyous decades that followed

In 1991, a caucus of middle-aged public-school chaps half-jestingly set about launching a magazine with what seemed a terrible name, The Oldie. (‘Why not Old Bastard?’ suggested one reader.)

Actually, John McEwen the art critic – now our Bird Man – says the idea came to him in a dream: a magazine for elders, called not Saga but Sage. Richard Ingrams, late of Private Eye, and Alexander Chancellor, late of the Spectator, met over a pub lunch. They were taken with this notion: an antidote to the cult of youth; a riposte to all things new-fangled – ‘the ugly debris of the 20th century’, as Ingrams put it.

Auberon Waugh and Patrick Marnham came on board. Stephen Glover, co-founder of the Independent, was approached for advice about backers; he became their fourth investor. Nobody was over 54, but all were photographed donning their reading glasses. Ingrams’s anarchic spirit prevailed. The Oldie (despite protests from some potential buyers) was to be the name.

Two feminist publishers (Carmen Callil of Virago and Liz Calder of Bloomsbury) threatened to launch a rival to this all-male enterprise, to be called The Crone. But Ingrams was already recruiting a harem, starting with Germaine Greer, Candida Lycett Green, Beryl Bainbridge and the Spectator’s in-house cook, the jolly, smoking, motorcycling Jennifer Paterson, soon to become one of the Two Fat Ladies on TV. ‘Pound three hard egg yolks…’ began her recipe for a hollandaise sauce to adorn Ingrams’s fish-finger suppers.

There was a launch party at the Groucho. The husky-voiced Emma Soames, then deputy editor, recalls the early days in a chaotic office, where everything was ‘totally unprofessional’. ‘There were no brainstorming meetings – there were no meetings! I would say, “Shouldn’t we produce a dummy?” and Richard would say, “What for?” But he had a commendably clear idea of what The Oldie was about, and every news programme and paper clamoured to interview him.’

Auberon Waugh claimed, in his Rage column, that the single event that propelled The Oldie into existence was the memorial tribute to Freddie Mercury ‘an ugly and untalented, possibly unpleasant Persian singer from Zanzibar’. Everyone knew that Bron’s splenetic bark was far worse than his bite, but Tim Rice rightly leapt to Mercury’s defence anyway. ‘Congratulations on producing the most pathetic magazine ever published,’ wrote Julie Burchill. Ingrams proudly made this the lead letter in the second issue.

He also printed A N Wilson’s letter in the form of an Augustan ode (reprinted in the Old Un’s Notes in this issue), imploring The Oldie to carry on the ethos of Private Eye and rage at the follies of the world. Many readers shared this expectation – hence the first issue’s sales of 100,000 – ‘but it was never intended to be Eye Mark II’, says Ingrams. Still, a 2012 issue he edited did feature an Eye-like exposé, by Miles Goslett, of the late Jimmy Savile’s crimes and misdemeanours.

Instead of publishing exposés, The Oldie specialised in venerating the venerable and traditional, deploring neologisms of modern life – in the first issue, a bewigged judge asked, ‘What is “Heavy Metal”?’ It welcomed readers’ tales for slots such as I Once Met (chance encounters with famous people) and Not Many Dead (trivial news stories about celebs, eg ‘Singer Billy Joel gashed his finger on the lid of a tin of beans he was opening for his dinner’ – Daily Mirror).

In the first issue, Jilly Cooper produced her list of pin-ups: ‘I really wanted to include Richard [Ingrams] – the most beautiful man ever, don’t you think?’ she says now. Invited to give us her pin-ups again for our 400th issue, in 2021, she included just one repeat: Andrew Parker Bowles, the ‘blue-eyed brigadier who was incredibly brave in the Army – and rode in the Grand National’.

Ned Sherrin boldly became Ned the Dead, covering memorial services. Barry Humphries’s creation Dame Edna soon had a column – ‘I am a Renaissance woman, possums.’ Sara Wheeler, Arctic traveller, was sent out on stunts: ‘Richard sent me to learn to belly dance, and Willie Rushton drew me at it; then Richard sent me to the London School of Striptease to learn the ropes for a piece (I banned Willie). Then Richard said I was past it, and sent me on a plumbing course.’ She cherishes a framed copy of the Rushton drawing.

At Oldie events, much fun was had. Drinking and smoking were almost obligatory, though Ingrams, casting inscrutable blue eyes over all social occasions, indulged in neither. Everyone gravitated to the inimitable sound of laughter from Alexander Chancellor, his cloud of smoke mingling with that of Bron Waugh, Beryl Bainbridge and Alice Thomas Ellis (who wrote the God slot), Jennifer Paterson and Miles Kington: all blithely smoking themselves to death, alas.

Oldie lunches at Simpson’s – notably the Oldie of the Year awards, presented successively by a variety of legends including Terry Wogan and Gyles Brandreth. You never knew who you’d sit next to: wicked Wilfred De’Ath, uproarious Admiral Lord West, the Hancock scriptwriters Galton and Simpson, or Sir Edward Ford, the Queen’s Private Secretary who had recently coined the term annus horribilis. (Ford’s son David was Oldie business manager.)

You would certainly encounter The Oldie’s saviours – Naim Attallah, John Paul Getty, human dynamo James Pembroke – who all revived the mag whenever it seemed about to go under; plus Jeremy Lewis, pillar of The Oldie, our patron saint ‘Jezza’.

Ingrams’s favoured lunch venue was a greasy spoon in Soho called The Star. Here we first met Edward Enfield, newly retired civil servant, father of the great comedian Harry. Harry suggested his dad should write for The Oldie – and how right he was. The World According to Enfield Senior kicked off with his description of having his four offspring home for Christmas, ‘sprawling about the place using foul language and laughing immoderately’. An instant success: Enfield Senior forged a new career as author, voiceover artist and Anne Robinson’s crusty-old-buffer sidekick on the BBC’s Watchdog.

In 2006, The Oldie first went cruising – on Swan Hellenic’s Minerva II, bound for Leptis Magna in Libya. ‘Sir Richard’, as the captain called him, was by nature cruise-averse. But, with The Oldie’s agony aunt Mavis Nicholson on his arm (‘Mavis and I are an item,’ he said), Ingrams acquired a dashing Berber hat and coat from a souk. He discovered a keyboard and began accompanying the sweet young flautist who played Bach and Mozart on deck every night. He was even seen dancing one night in the Orpheus Bar. Our cabaret performer Maureen Lipman’s hilarious imitation of an Arab tour guide in the medina of Tunis would definitely de-platform her today.

Our next editor, Alexander Chancellor, was another ace pianist who only ever sought amusement, and could never tolerate being bored. One night, he met Brigid Keenan at dinner, was instantly captivated and made her fashion editor. One memorable Tuesday, during an Oldie literary luncheon, he fell sound asleep at his table in Simpson’s and crashed to the floor. Luckily, the speaker (it was Terry Waite) seemed not to notice and blithely carried on.

Our third and present editor, Harry Mount, arrived on his bicycle, exuding fitness and youth. Luckily he was able to reassure us, the aged regulars, that in spirit he had been an old fogey since the age of five.

Like Richard Osborne, our distinguished and scholarly music critic who lives at Eton, I joined The Oldie (writing about Wireless) in its first issue. I was 45. So I have grown old along with The Oldie. By chance Mary Kenny (my friend since 1967 when we met on the Evening Standard Diary) also appeared in the first issue. She interviewed Monsignor Francis Bartlett for Still With Us, and he died within weeks. (‘Such a sweetie,’ she recalls, ‘who told me it’s never a problem keeping servants if you have plenty of babies and funerals.’) Thirty years on, Mary and I are still here, doubly bonded – since her second son married my second daughter – as co-grandmothers of three adorable (of course) grandchildren.

One day, they will find me in my study, buried alive under towering columns of Oldies: all 410 of them are stored in chronological order. I sometimes flick through a selection of the thousands of cartoons which Ingrams always said were the core of The Oldie’s success. At random, I pick one out. An imperial figure in laurel wreath and sandals is addressed by a soothsayer: ‘And it shall come to pass, great Caesar – you shall have a salad named after you.’