Thomas Becket's murder – my return to the scene of the crime 850 years on. By Ferdie Rous 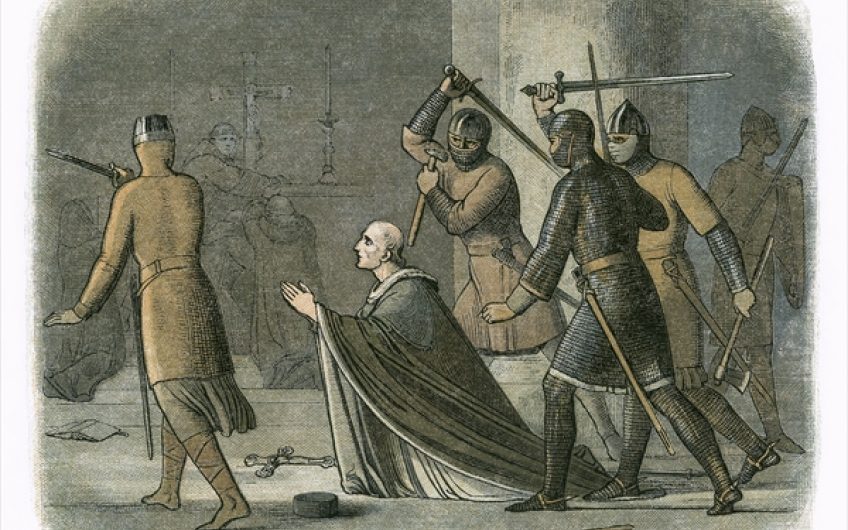 A new show on Thomas Becket is opening at the British Museum on May 20, starring an 800-year-old stained-glass window from Canterbury Cathedral. 850 years after Becket's murder on December 29th, 1170, Ferdie Rous returns to Canterbury Cathedral and his old school to confront the memories of his school bullies

It’s cold when I arrive at Canterbury Station. I’m still not sure I want to come back to my old school, King’s, Canterbury.

As I make my way down the hill – Bell Harry, the cathedral’s central tower, and the disgusting, grey, glassy Marlowe Theatre poking out of the flat skyline – I remember making the reverse journey seven years before.

It was the middle of the school term. I was coming home on exeat for a weekend. I didn’t return for two months.

Boarding got the better of me. I was stuck in a house with 50 other boys, commanded by a man whose only interest was a sport I couldn’t play. Badly bullied at school, I became bitter and cruel. And I am still not over it. I had refused to leave, when given the chance. That would’ve meant accepting defeat. Saving face was all.

As I get to the entrance to the cathedral precincts – also the entrance to my school – hesitating to go in, I see Sir John Boys House, named after the MP. Built in the 17th century, it is a delight to the eye. Also called the Crooked House because of its squashed doorway, caused by a structural collapse, it is now a charity bookshop.

After much umming and ahhing and three cigarettes, specially bought for the day – I quit eight months ago – I pluck up the courage to go in.

The King’s School, Canterbury, the oldest school in England, founded in 597 by St Augustine of Canterbury – the first Archbishop of Canterbury and the founder of the English Church – takes up a good half of the cathedral precincts with boarding houses and its mix of medieval and modern classroom blocks.

The first thing you see is the School House and the warm, yellowish stone of the much-painted Norman staircase from which King George VI presented the school with its Royal charter. The entire school stood before him in Memorial Court – a simple, flagstoned opening, overshadowed by the dining hall – its only feature a cross commemorating the boys who fell during both wars.

We would line up there in full Canterbury dress – our pinstripe uniform – for Remembrance Sunday. A thousand pupils and teachers would stand – in regimented order, by house – in this small grey space to hear the names of the dead in silence. Each name is engraved on a plaque by the nearby chapel. Once, during the two minutes silence, one of the boys in my house fainted. Nobody noticed until the reveille.

The school proper surrounds Green Court. The tradition that allows the head boy or girl to keep a goat on the grass was never followed, but we lived in hope. It does have some regular occupants though: the Dean’s herd of guinea fowl. They were viscerally hated by everyone, the bane of exam time and silent study.

Facing the cathedral on the court is the school dining hall. I remember going to lunch one day with a housemate. After we sat down, I went to get some water, only to find my tray had moved. Someone else was sitting in my place. A small thing, but painful to remember.

As I head towards the cathedral, past giggling pupils, prospective parents with their pre-teens –I can only wish them ‘Good luck’ – and a stern-looking gym teacher, I get to the Dark Entry. It’s a passageway below the Prior’s Lodging – a sort of guardroom between the school and hallowed ground.

It’s supposedly haunted by a servant girl who, objecting to the affair of an elderly prior, poisoned his mistress. As a punishment, she was buried (possibly alive) beneath the flagstones. And her ghost is often seen, but only on Fridays. Recollections of my neurotic superstitions surged back as I hopscotched around some of the flagstones while making sure to jump on others.

The cathedral choir is mid-rehearsal as I enter. I look up into Bell Harry, then down the long archways to the nave. I feel small, cowed by a medieval God.

Past the dark wood panels and red seats of the quire is the Trinity Chapel, where the shrine of Thomas à Becket that stood before it was destroyed by Henry VIII. A lone candle commemorates the shrine. If you look closely, you can see a lip on the floor, made by the thousands of pilgrims who knelt before it, praying.

The 850th anniversary of Becket’s murder in 1170 is on December 29th this year. The Vatican are loaning the cathedral Becket’s tunicle, a religious vestment for the summer, if the cathedral is open by then after the lockdown.

Below my feet is the crypt. I’d never been before. It is dark and oppressive. Antony Gormley’s sculpture of a figure, made with iron nails from the cathedral roof, hangs over the site of Becket’s original tomb. The sombre brutality contrasts with the lavish, though faded, 12th-century paintings in St Gabriel’s chapel, only feet away.

Over the road from the cathedral, beyond the city walls, are the remnants of St Augustine’s Abbey, a monastery from 598 AD until its dissolution in 1538. The abbey was rescued in 1844 by Alexander Hope, a local landowner and MP. It became the site of a college that trained missionaries for imperial service. In its day, the abbey would have competed with the cathedral (founded a year earlier, in 597 AD) for size. A small covered space shows the site of Augustine’s original church – a modest place for the birth of English Christianity.

Before I go, I take one last look at the school. I bump into the tutor who got me through the dark times and the headmaster who made a point of comforting me when my grandmother died.

I go looking for my French teacher, a Hector of sorts (with none of the flaws that mark Alan Bennett’s character in The History Boys). In his slightly awkward way, he says, ‘It’s good to see you. Well, because… there were times… when you weren’t quite so well.’

Yes, quite. With that, he shrugs, smiles and races off to the staff room.

On my way back to the station, I walk down the high street. Families stroll together (this was before the lockdown). Two boys chase each other down the street. It’s cheering.

As the train pulls out of the station, heading back to London, a weight lifts from my shoulders. I’m glad I came.

Reading – consolation for my cancer. By Claire Gilbert