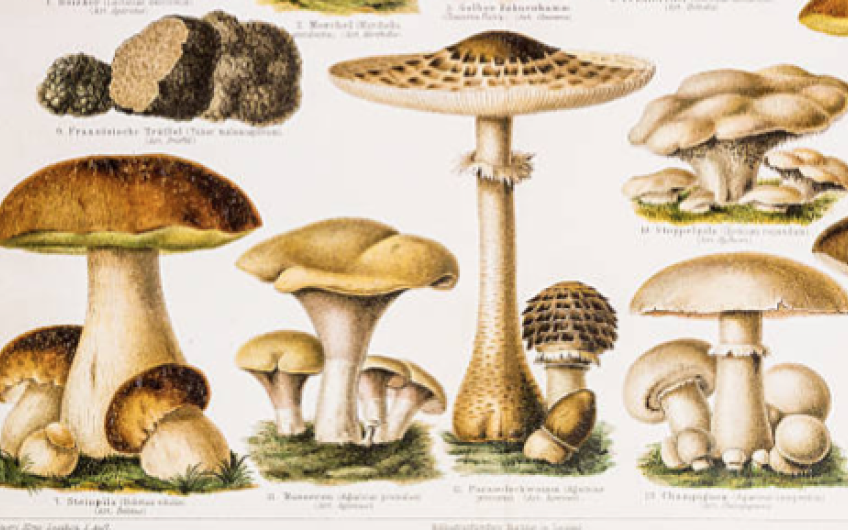 It’s the season for woodland fungi, most delicious of all our foods from the wild.

Look out for the big, brown-capped members of the boletus family, a tribe of (mostly) edible and good fungi, distinguished from all others by its spongy underparts – slender tubes rather than gills – that vary in colour from palest ivory to sunshine yellow. There a few wrong ‘uns – I avoid anything with a scarlet tinge to the underparts or that bruises blue – but none is fatal (a good thing in a mushroom). When adding a new gathering to your repertoire, go out with someone who knows and then stick with what you learn. A reliable identification manual is a failsafe: of these, Roger Phillips's Mushrooms and other Fungi of Great Britain and Europe (Pan paperback) provides clear photographs and accurate descriptions of some nine hundred species, edible and otherwise.

The king of the bolete – you’ll mostly find them under oak, birch, pine – is Boletus edulis, a species known in Britain as penny-buns, porcini in Italy, cèpes in France, steinpilz in Germany. Once you have earmarked your gathering-patch (fungi appear in the same place every year), pick the fruiting body gently, by slicing the stalk close to the base with a knife, or use a firm twist of the fingers, to avoid harming the mycelium – a fine, near-invisible net of filaments which serves as the root system. Always collect in a basket or paper bag, never in a plastic or sealed container. To dry for storage, spread on newspaper, or thread on button-twine, and set in warm airing-cupboard or near a radiator – even the lowest oven is too hot for the job. Store when perfectly dehydrated in an airtight jar. Last year’s crop can be reduced to a powder in a spice-grinder (useful to add a flavour-whack to a sauce or stew).

To cook fresh, don’t rinse, just brush off any dirt, give the caps a wipe if necessary, slice (removing the spongy underparts if soggy) and fry gently in butter or olive oil. Be patient: let them fry once till the juices run, salt lightly, and fry them some more until the moisture has evaporated and they caramelise a little. Butter works well with a slosh of cream; olive oil loves garlic and parsley.