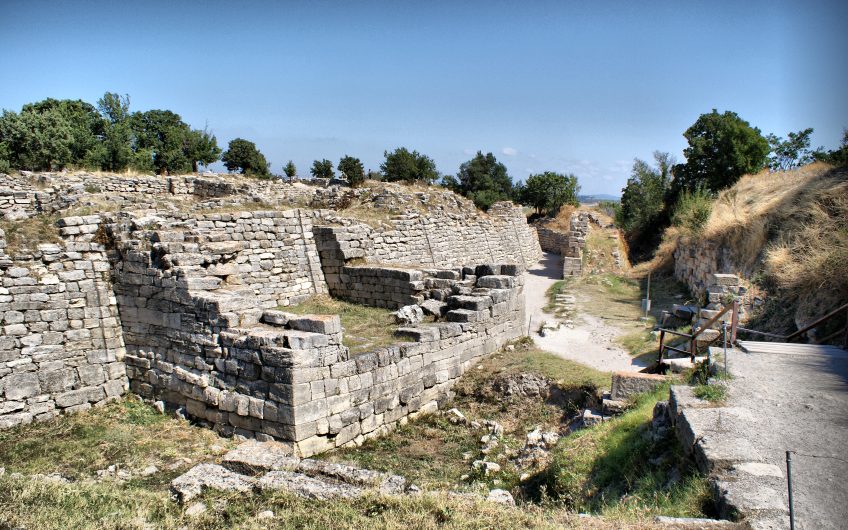 Question: what is the most incredible archaeological site in the world least frequented by marauding culture vultures?

Answer: Hissarlik (“Place of Fortresses”), a windswept hillock amid the fields of Çanakkale province, north-western Turkey.

Because Hissarlik Hill conceals a city - city - Troy, the fall of which Homer recounts in his 8th century BC Iliad, charting events from the Late Bronze Age, some 400 years earlier.

Forget women wielding apples or species-eradicating floods. The toppled towers of Ilium form Western culture’s great ur-story, the devastated cradle from which its cities claimed origin, its celebrities their ancestry.

I get this. I’m Trojan myself. From the moment I first heard the legend – when? one feels born knowing it – its constituents felt more familiar than tales of Yahweh and his plagues, or hippy, sandal-wearing Jesus.

Homer’s heroes may be pelted figures from 3,000 years ago (the 1180s BC being archaeology’s best guess for the city’s Late Bronze Age conflagration ­– ie the Trojan War). But we know them more intimately than many of our contemporaries.

There’s iron-jawed automaton Agamemnon, still rigid with post-traumatic stress from the events at Aulis. Or ghastly, closeted jock Achilles, brought up transgender and epically over-compensating. And, of course, Helen of Sparta, latterly Troy, with her terrible beauty, tormenting her abductor, making eyes at Hector; screeching Bacchically along Troy’s battlements as the city burns (as we learn later in the Odyssey and the Aeneid).

Back when I was single, my deal-breaker inquiry was ‘Who are you in the Troy narrative?’ No individual of character ever lacked a response. In one fell swoop, one learnt everything there was to know about someone; not least from the chaps who responded ‘Paris’, imagining this conveyed ‘dashing’, thus revealing themselves to be weak, cowardly and a hick Johnny-come-lately despised by one and all.

Where the Odyssey gives us a shag-happy, marital gap year (okay, decade), so the Iliad teaches us everything we need to know about the human condition: namely, we’re all doomed and we’re the ones who caused said doom, whichever deity we choose to take the rap. In it is the seed of all the other myths that haunt us: the savagery of the gods, beauty as a spur, heroic hubris, the beleaguered fate of women and every subsequent tale in which east meets west.

This winter, the British Museum will look at Troy as the sum of such narratives, through its depiction on pots and in paintings, via ancient sculpture and contemporary works. At the same time, it will consider Troy’s status as a reality, transporting us to Hissarlik. This may come as something of a surprise to exhibition goers – classicists included – as many still consider Troy a Homeric fiction rather than a historical fact.

Professor Rüstem Aslan, Chief Archaeologist at Troy since 2013, continues to be on the receiving end of such prejudice. Asked ‘Did the Trojan War take place?’, he exclaims, ‘Of course! We’ll never be able to prove it 100%, but all the archaeological, philological, paleogeographical and scientific evidence confirms it, such that I can say, “I believe the Trojan War happened – and happened here.”’

He isn’t just battling the notion that there was no truth behind Homer’s tale. Professor Aslan is also forced to confront a certain orientalism that remains blind to the eastern aspect of the story - despite the confrontation between east and west being the narrative’s premise.

‘I’m in Troy – in Greece,’ he has heard more than one visitor announce into his mobile, when not being in Greece is rather the point. And these are the people who’ve bothered to make the four-hour drive from Istanbul.

This notion – that it’s all fictional – and the orientalism both have their origin in the one part of the Hissarlik narrative people do tend to have heard of: the excavations by the German archaeologist-cum-looter Heinrich Schliemann, beginning in 1870.

Schliemann may have put Troy back on the map. But his heavy-handed, self-aggrandising approach involved trashing, misinterpreting and then stealing much of what he found. As one commentator said, his methods were so crude as to succeed where the Greeks had failed and raze the walls of Troy to the ground.

Later investigations have demonstrated that there are at least ten Troys, one on top of the other, which can be arranged in a diagram that resembles a series of flying biscuits. The Troy of Homer’s epic comprises Bronze Age biscuits (numbered VI and VII). This was a period when the city has been proven to have been far closer to the sea; mighty defence walls were constructed; a ditch was built against chariot attack; the vulnerable West gate was closed; and a treaty was signed with the Hittites to the east, suggesting strategic uncertainty.

Even if Hissarlik Hill didn’t contain Homer’s Ilium, it would still be one of the most astonishing archaeological sites in world, having been in almost continuous occupation since 3,600 BC (the earliest layer now known as Troy O). Homer’s possible visit to Troy VIII in the 8th Century BC boosted a tourist industry that flourished into the Roman period and beyond. Celebrated visitors included Xerxes (in 480BC), Alexander the Great, Augustus, Hadrian, Constantine and Sultan Mehmet the Conqueror (1462AD).

The rise of Christianity meant that the place was increasingly regarded as a pagan shrine, and then gradually forgotten. That said, as Professor Aslan says, ‘The memory of the geography didn’t stop. Stories of the Trojan War never left the region.’ Witness (the daughter of Priam and Hecuba) Polyxena’s sarcophagus, discovered 60 miles from the site in 1994, buried in an area known for centuries before as ‘Dead girl’s hills’.

20th and 21st Century tourists have been divided between finding today’s Ilium a sublime revelation or an inscrutable pile of rubble. Professor Aslan says, ‘People expect it to look like Ephesus without realising that it’s 2,000 years older.’ His new £7.5million Troy Museum, opened this year, only five minutes’ drive from the site, should improve matters for those who find the site unyielding.

Together with the BM exhibition, the re-opening of Istanbul’s archaeology museum, and next year’s launch of Schliemann’s Hissarlik home as a ‘visitor experience’, the professor is hoping that 2020’s visitor figures will increase from 700,000 to a million, with Britons up from their current 20%.

Climate-wise, autumn and spring make the best times to go. One could do worse than stay at Çanakkale’s Büyük Truva Hotel: forty quid a night, with terrific food, plus the opportunity to purchase reproduction Trojan bling.

Even without Troy’s cracking new museum, I’d be back, because nothing will ever compare with gazing out from its West gate – declared weak by Athena in Homer’s poem and walled up in 1300BC - to where Priam would have watched his son being slaughtered.

‘Is it okay to think that?’ I ask the professor, mindful of the years of caveats and caution. He smiles: ‘If you have no feelings about the Iliad, then you’re not allowed to work in Troy.’