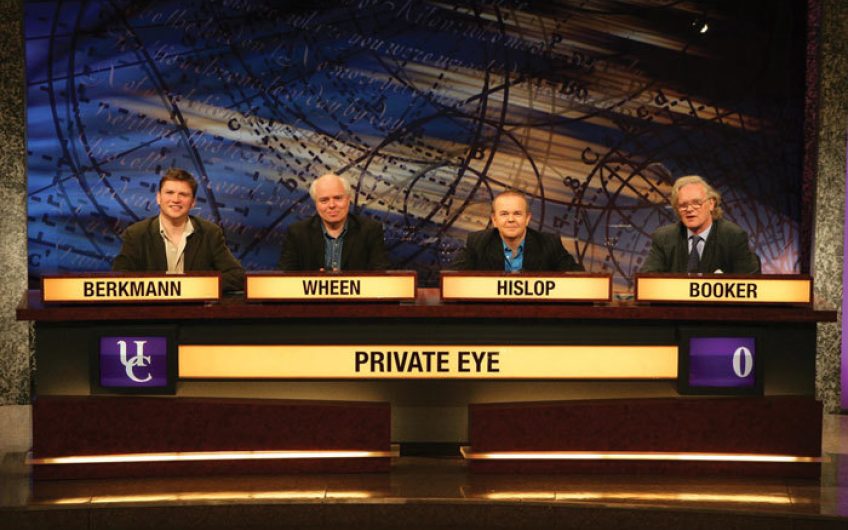 I suspect I’ve been asked to write this piece because the Editor thinks it will enable Oldie readers to feel smug. As a dedicated viewer of University Challenge, he claims frequently to be astonished by the fact that so many of the contestants don’t know things which he had thought were common knowledge, like who had the fourth highest batting average in the 1949 England cricket tour of South Africa.

As the students look blank, the Editor sits at home, like all Oldie readers, thwacking the arm of his Parker Knoll Recliner, screaming at the television, ‘It’s Crapp, Crapp, Crapp, you fools.’ We cannot all aspire to the Editor’s ability to recognise the euphonious Gloucestershire left-hander, J F Crapp. But I suspect he is accurate in his vision of people across the nation hurling their cups of Ovaltine at the television screen with cries of ‘What on earth do they teach young people nowadays?’

I share the irritation about some of the questions one is expected to ask. Why an ability to recall the canon of Fat Boy Slim is thought by the producers to be evidence of intellectual achievement is a mystery. It probably has something to do with the fact that the programme was commissioned by the BBC’s ‘Youth’ department. Whoever’s responsible, it’s hardly the students’ fault that they can answer the questions.

I confess that sometimes I, too, am astonished by what they don’t know. The other week we had a music round entirely made up of three of the best-known hymns in Christendom. No one was able to identify the starter question, and when the bonus questions were eventually allocated, they all fell to Keble College, Oxford. This being an institution built in memory of the founder of the Oxford Movement, you might have expected the Keble students to make a clean sweep. Instead of which, the best and the brightest the college could produce sat dumbly as one hymn after another echoed around the studio. They might as well have been a collection of Aztec prayer chants.

What do we conclude from these astonishing lapses? Are all students nowadays irredeemably ignorant? I’m sorry to disappoint. But it has been a sad fact of the British educational system for decades that in order to qualify for university you need only to be able to appear plausible to a bunch of lecturers who know little or nothing outside their specialised field. The idea of the general education which produced the well-rounded mind was smothered when A-levels were invented. We should have to admit, too, that, as the number of universities has expanded, the level of intellectual achievement has gone down. How could it be otherwise, when the proportion of the school age population going on to tertiary education has risen almost tenfold?

Although all the student teams on University Challenge have had to qualify by passing an entry exam, the chasm between the highest-scoring qualifiers and the lowest is vast. In the early stages of the competition, there are bound to be embarrassments. There is nothing worse than sitting there asking question after question as one team fails to provide a single correct answer. But there does come a point – when the scores are 200 against minus ten – when the thing acquires the awful fascination of a car crash.

Yet even among the better teams there can be astonishing lacunae. How, do you think, can they not know the date of the Battle of Crécy, or Tennyson’s first name?

But all knowledge exists in a cultural context. Even Pythagoras, Einstein, Mozart or Goethe must, very occasionally, have exclaimed, ‘Well, I never knew that!’ And since no one can be expected to know everything, the question is merely which things some of them do know.

Clearly, times have changed. The average contestant seems to know a lot less about classical mythology than you might have expected forty years ago. But they know a great deal more about science. They may have no idea who Sisyphus was, but they can probably identify Schrödinger.

Before you hurl your mug at the television, remember two things. Firstly, that (with one or two exceptions – that ‘perpetual student’ really does exist and is even now signing up for a tenth degree somewhere or other) they are all a lot younger than you. It’s all very well attacking them for not knowing something you fondly imagine you might have known at the age of twenty. But how many armchair critics, with the luxury of another twenty, thirty or forty years, can explain Planck’s Constant? They ought to be able to do so. Knowledge, as much as wisdom, accumulates over the years.

And secondly, it’s a damn sight easier watching at home shouting out the answers than it is sitting in a tense television studio knowing that if you get it wrong half the Student Union will refuse to share their pork scratchings with you. One team, from another Oxford college, fielded a Catholic priest who, while he seemed to know almost everything about Josephine Baker, was unable to identify the Magnificat. Nerves can do that to you.

No, I think I am going to disappoint The Oldie’s distinguished Editor. Armchair criticism of the ‘Bah, students nowadays know nothing’ variety is as valid as a capon’s comments on why the cockerel failed to get the hens laying.