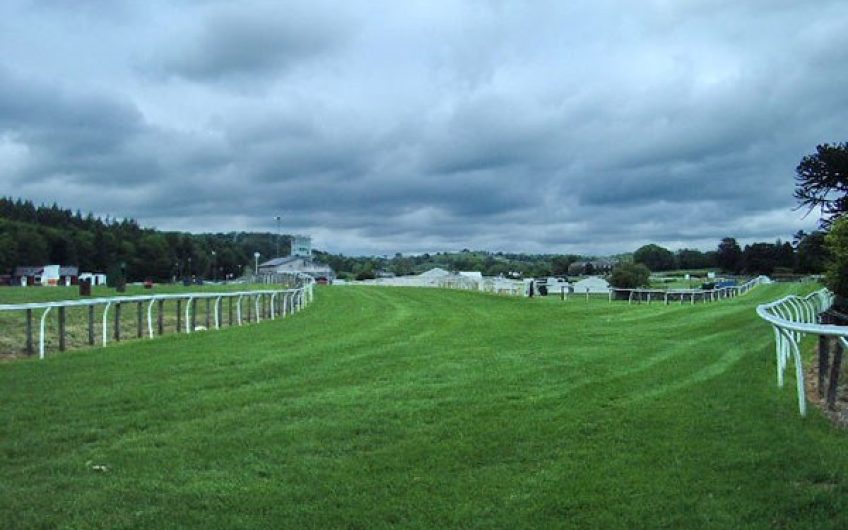 Cartmel is probably the least known National Hunt Racecourse in England and also the most beautiful. When I first went there I was bowled over by the glory of its setting.

But the racing is extremely average and attracts only run- of-the-mill animals rather than high quality ones. It is a place for sellers, amateur riders and novice hurdlers.

‘No, of course I’ve never sent a horse to Cartmel,’ said the rather affronted top trainer Charlie Brooks when I asked him if he’d been there. ‘I’m afraid it wouldn’t enter my head.’

Poor Cartmel doesn’t have a very good reputation with high-flying trainers — but then it is out on a limb, albeit a ravishing one at the foot of the Lake District, where the mountains have turned into friendlier hills and the smell of the sea is on the air.

Racing has long been in Cartmel’s blood; perhaps originated by bored medieval monks from the priory who were said to race their mules along the sands on their way to Lancaster across Morecambe Bay. The track undulates unnervingly in this beautiful bit of north Lancashire, the chosen site of an ancient British camp. It is only a mile round, so nobody needs binoculars. It is either visible to the naked eye or obscured altogether when it travels through trees, more like a point-to-point course than a racecourse, sometimes getting very narrow, and at one point flanked by a solid lakeland stone wall.

Being so tucked away it isn’t surprising that one of racing’s most brilliant coups took place in Cartmel, in 1974, when Gay Future came in at 10-to-l at the August Bank Holiday meeting. Thought to be trained by an unknown Scottish permit holder named Collins and ridden by an unknown Irish jockey, the horse had in fact been switched at the last moment three miles from the track and was ridden by a top Irish amateur. It’s a longer story than that, but the upshot was that the Irish betting team who were hitting every betting- shop in London weren’t paid, when, in fact, the coup was, in my book, legitimate. Scotland Yard was called in and winning payouts withheld. It was by no means the first time that bookies had been outwitted over a Cartmel race, but it was the first time that the police were involved, and a national scandal evolved.

Cartmel village could hardly be bettered; it is just as Ward Lock and Co’s Red Guide described it at the beginning of the century: ‘A quiet place, a cathedral city in miniature, happy in the possession of a fine old priory church, one of the few which escaped the destruction at the dissolution.’ This great cathedral-like church, which dominates the village, is part of the vanished priory founded by William Marshall, Earl of Pembroke, towards the end of the 12th century. Because it was also designated as the parish church for the local community of cocklers and fishermen at the outset, it was allowed to remain intact when all else was destroyed. The choir stalls and screen are exceptional and in the vestry is one of the earliest umbrellas in existence with a leather canopy. The church also owns a first edition of Spenser’s Faerie Queene.

There is a good five-bayed early 18th- century house near to the church, of the calibre you’d expect to find in a cathedral close, and there are also pretty 17th- and 18th-century cottages on winding streets and set beside the brook which runs through the village. Although there are now three gift shops, one-and-a-half antique shops and a needlework shop, there are also two very good secondhand bookshops. Mr Baines- Smith’s in the Square, open seven days a week, has one of the best collections of children’s books in the north of England — Biggies, Just William, Arthur Ransome and, not unnaturally, Beatrix Potter. Mr Kerr’s bookshop at the bottom of the 14th- century gatehouse is open by appointment. Mr Kerr, who started it in 1933 in the still unchanged premises of a Victorian draper’s shop, is a member of the Antiquarian Booksellers Association and does a world-wide trade through his catalogue. Although semi-retired he is still well-known in the trade for specializing in ‘railwayana’. What nicer station to call your own than Grange-over-Sands just down the road.

Stand in Cartmel’s central square and the views are lovely in all directions. The whole place is picturesque without being overdone, and does not feel like a film set as so many villages in the Cotswolds do.