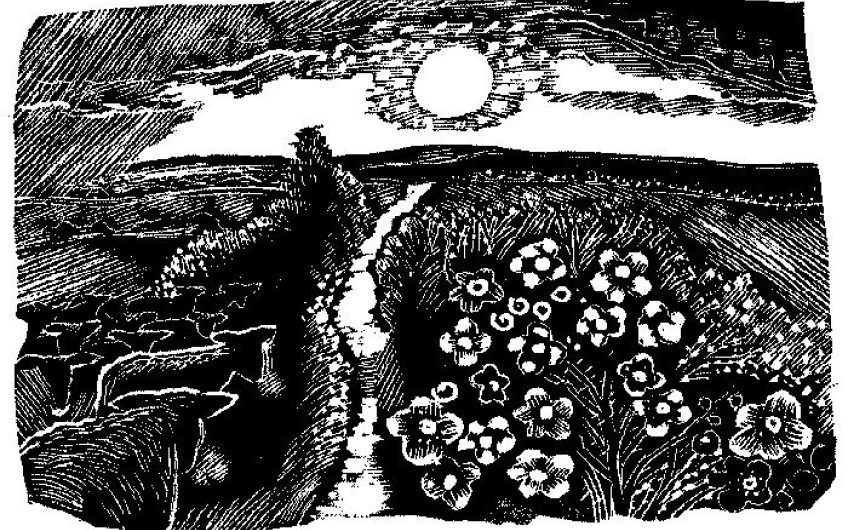 On a pale watery day, depressed, I walked from Uffington towards the high wall of Downs a mile to the south. The footpath led across flat fields to meet the clear chalk-bottomed stream which falls from a spring below Uffington Wood. Elder and hawthorn arched beside the path and an occasional huge crab-apple tree towered over it, spread under with a thick carpet of rotting fruit. The Old Berks Hunt had been this way the day before: hounds’ feet had patterned the mud and flattened dead nettle stalks; horses’ hooves had churned a deep furrow along the side of a field of kale. At the stile they had turned away towards the hamlet of Fawley and I followed the path instead, which led up through sheep pasture and across an old stone bridge beside a ford.

As the path climbed the steep incline beyond, the stream fell into a deeper and deeper cutting, tumbling down in a series of waterfalls until it was lost from sight in a mossy elder-filled ravine and the path petered out in an open field. From here, there was a perfect level view of the strange and ethereal hill where St George is said to have killed the dragon – like a flat-topped steamed pudding moulded onto the lower slopes of the Downs. The chalk marks down its sides are the dragon’s blood.

Across the Icknield Way, which at this stretch between Kingston Lisle and Ashbury carves its way under the hill, lurching in and out of fairground-like dips and bends, is a proper humdinger of a farm called Britchcombe. The small brick and clunch house clings to the eastern side of the combe, and behind it an ash wood, veiled in old man’s beard, hangs all around and goes up a steep hollow to the sky. The sloping yard harbours higgledy-piggledy barns, battered and unglamorous, and a pretty eighteenth-century chequered brick dovecote. Under apple trees are game hens, peacocks, ducks, geese, chickens, guinea fowl and, in hutches and sheds, rare breeds of sheep like Castlemilk Morrits and North Ronaldsays.

At this time of year more often than not you will find the farmer bottlefeeding the newborn lambs in one of the barns. She has lived on the farm since the early Thirties and can recite local poetry, from ‘The Barkshire Tragedy’ to ‘The Lay of the Hunted Pig’, until the cows come home. She runs nearly a thousand sheep on the Downs around her farm which includes White Horse Hill.

The only way out of Britchcombe to the top of the Downs is by climbing the steep bank, clinging to a rope of old ivy as thick as a bannister rail, where a stile marks the way out into an open field which runs up the side of the wood. Halfway up this last slope there is a plateau to rest, where an old deep-cut chalk track runs curling up from Fawler Combes to join the path. You can look back at the village of Kingston Lisle settled comfortably below, with its four-square farm and its elegant eighteenth-century pile just visible through the trees of the park.

The last pull is easy and the generous track between the plough, where peewits call, leads to the irresistible, timeless, archaic Ridgeway – the oldest track in Europe. All is right with the world up here. The feeling that men have travelled this way for perhaps ten thousand years or more puts things in perspective, and it doesn't matter that the cold wind whistles over from Lambourn.

I walked down by White Horse Hill, where Thomas Hughes, Uffington’s famous nineteenth-century son, loved to be and of which he wrote in Tom Brown’s Schooldays:

‘And then what a hill is White Horse Hill! There it stands right up above all the rest, 900 feet above the sea, and the boldest, bravest shape for a chalk hill that you ever saw... The ground falls rapidly on all sides. Was there ever such turf in the whole world?... It is a place you won’t ever forget – a place to open a man’s soul and make him prophesy...’