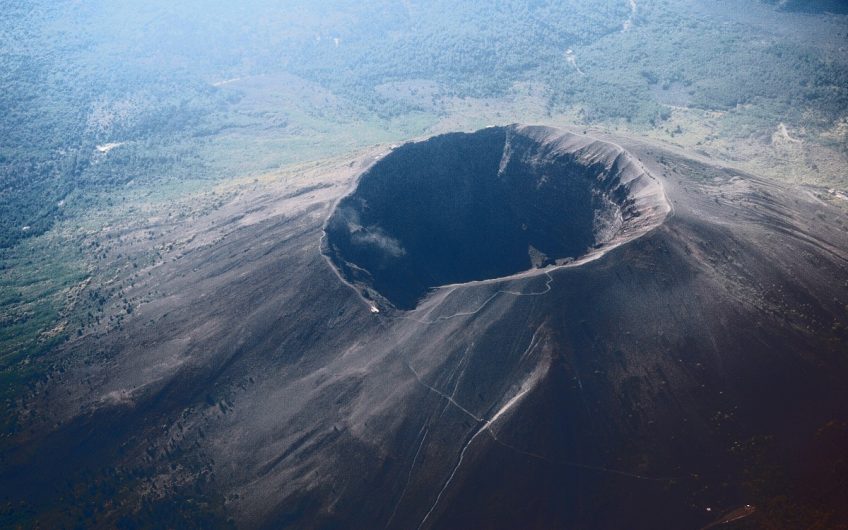 Vesuvius from the air. Source: Pastorius
View Full Size
1
of 1

The tragic eruption of a New Zealand volcano is a reminder that it's only a matter of time before the world's most famous volcano erupts, says Harry Mount

In 2011, Mount Etna erupted in a pretty dramatic way.

Still, though, Etna's eruption got minimal news coverage. If Vesuvius erupted, the foreign correspondent pack would be booking themselves on the Roma-Napoli express train prontissimo.

Vesuvius is the ultimate volcano: the first volcano we learn about as children, the brand name that's applied to fireworks and to epic films about ancient Rome, the only volcano in mainland Europe.

Part of the reason for the volcano's fame is that it only erupts intermittently. Etna blows its top regularly. But Vesuvius hasn't erupted since 1944, soon after the Allied landing, when US Army Jeeps were photographed in the lee of the exploding volcano.

Throughout recorded history, Vesuvius has had decades-long periods of dormancy. That has meant us short-termist humans have regularly - and foolishly - built new settlements right next to the old lava flows.

In her 2011 book on Vesuvius, Gillian Darley, biographer of John Evelyn, John Soane and Octavia Hill, is particularly good on this "demonic game of grandmother's footsteps", as the houses and shops creep higher and higher up the slopes. These endangered buildings were illegally built but the authorities have turned a blind eye to them. On the edge of the Red Zone, the riskiest area, there's even a huge oil refinery and a brand new regional hospital.

The doomed inhabitants of Pompeii and Herculaneum in 79 AD were just as crazily optimistic and short-termist. They would have known of previous eruptions. And there was an earthquake a mere 17 years before, that wrecked both cities. The Roman philosopher Seneca said of that disaster, "What hiding place do we look to, what help, if the earth itself is causing the ruin?"

Well, as most schoolboys used to know, the citizens of Pompeii and Herculaneum found no hiding place when the earth moved again soon after.

2,000 years, and countless eruptions, later, it is still the 79 AD eruption that makes Vesuvius the most famous volcano in the world.

The eruption preserved two Roman towns in exceptional condition - even if they have been damaged by woeful archaeological standards ever since Pompeii was discovered in the 1590s, and Herculaneum in 1709. (Pompeii is better known because it was found earlier and more of it has been excavated).

Pompeii also offered tourists the most delicious thrill of all - of human beings preserved at the moment of death. The thrill was expertly heightened in the early 1860s by the archaeologist Giovanni Fiorelli. He perfected the technique of injecting plaster into lava cavities formed by immolated bodies, to produce the casts of Pompeiians in their death throes - still the biggest draw for modern tourists.

The fame of the 79AD eruption was helped, too, by the man in charge of the naval base at Misenum (modern Miseno, across the bay from Neapolis, now Naples) - the polymath and natural philosopher, Pliny the Elder. He rushed across the bay on a boat for a closer look at the volcano, only to be killed by the sulphurous fumes. His nephew, Pliny the Younger, stayed behind, and it is his letters, to Tacitus, 30 years later, that give the best early description of the volcano; the foundation on which subsequent visitors built their accounts.

And a lot of people turned up over the years, creating one of the first European tourist hotspots.

When John Evelyn visited Vesuvius in 1645, the guides had already perfected the stunt of placing a dog in the Grotto del Cane, where it was promptly knocked out by the poisonous gas of the volcano, before being revived in cold lake water. Another dog, kept in the cave, dropped dead.

The second great Vesuvius PR, after Pliny the Younger, was Sir William Hamilton. But for Lady Hamilton's affair with Nelson, Hamilton would be remembered as the Ambassador to the Kingdom of the Two Sicilies who fascinated late-18th century Europe with his first-hand record of Vesuvius's eruptions, broadcast to London in 1768 with a lamp-lit son et lumière show.

Darley's description of the growth of the early souvenir trade - in ornamental Vesuvius fans, pastille burners and snuff-boxes - is comprehensive, as is her story of how scientists gradually worked out what was going on beneath the Neapolitan soil. Recent research has shown that there's a 400-square-kilometre reservoir of magma lying five miles below Vesuvius, stretching right out to sea.

All that magma is keen to see daylight, too. Anyone who visits Vesuvius with this useful vademecum - a sort of handbook, coming from the Latin for "Go with me" - should take care. The volcano will erupt again one day.