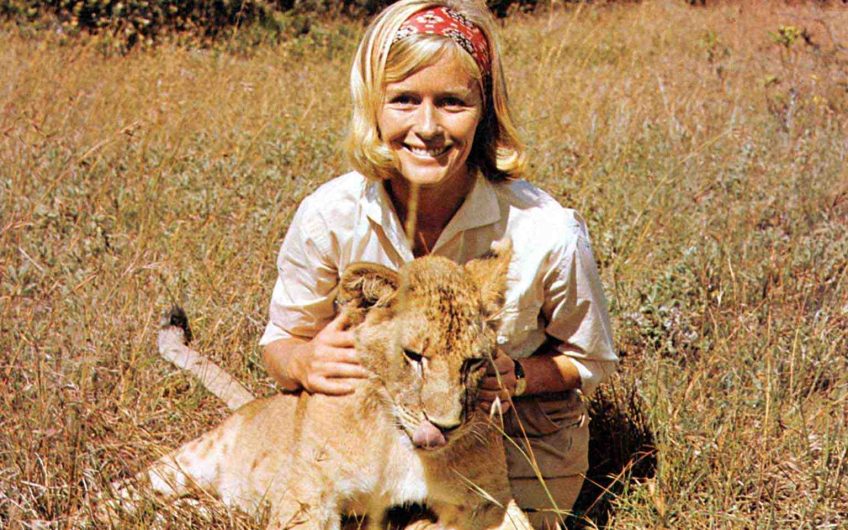 At 90, the actress is still saving the wildlife she fell in love with, filming Born Free, over 50 years ago. By Roderick Gilchrist

The Great and the Good – including Joanna Lumley, explorer Sir Ranulph Fiennes and Carrie Symonds, the Prime Minister’s fiancée – are lobbying for her to be made a dame in recognition of her inspirational work for animal conservation.

‘Goodness,’ says a surprised Virginia. ‘I have no desire for personal honours.

‘I have been privileged to help wonderful animals and gained immense happiness when we’ve given them back their dignity and space in their natural environment. That’s my reward.’

It’s 37 years since Virginia, her husband Bill Travers and their eldest son, Will, founded Zoo Check which became the animal charity Born Free. It took the name from her 1966 Oscar-winning film about Elsa, an orphaned lion cub successfully rehomed in the wild by Kenyan game wardens George and Joy Adamson, author of the original book Born Free (1960).

The first Zoo Check event was in a Chelsea pub in 1984, with an auction conducted by Ronnie Corbett, raising £2,000. Today it has 200 employees and the annual £5m income saves wild animals trapped in circuses and zoo cages. It rehouses them in sanctuaries on the African savanna.

Born Free and Virginia have just had a significant success. After they lobbied for nearly 25 years, the South African government has just banned ‘canned hunting’ – shooting lions bred in captivity, released in pens behind wire.

‘It’s cruel and sickening,’ she says. ‘No animal should ever be killed for fun.’

At nearly 90, she’s still a bundle of energy. Her life, until COVID struck, was a whirlwind of flights around the globe to release tormented beasts from head-banging misery. She always wears the same kind of tan desert boots she wore in Born Free.

Forced to self-isolate at her picturesque gamekeeper’s cottage in the Surrey Hills, she has a companion in the shape of Romy, a rescue Collie from Romania. (Sadly, Bill Travers died in 1994, aged 72.)

‘What I hope is that people confined to their homes during lockdown will now have some idea of what life behind bars must be like for bewildered animals, never to be free.’

I met Virginia when I was in Fleet Street, commissioning stories on her battle to remove an elephant, Pole Pole, with which she had made a film in Kenya, from London Zoo. When the elephant died, following a bungled attempt to move her to Whipsnade Zoo, Virginia telephoned me, sobbing uncontrollably.

But it’s always the lions in Born Free that people ask her about.

‘The producers told us the lions were really just like pussy cats you could play with. They turned out to be ex-circus lionesses and far from welcoming. Then everything changed. Boy and Girl, two orphaned lion mascots from the Scots Guards in Nairobi, arrived and we became inseparable, playing football with them; even walking alone together in the African bush, which was heavenly.’

There was a dangerous moment when the lions showed they hadn’t read the script. Tracking gazelles, the lions went into hunting mode, tummies on the ground. Boy tapped the actors’ ankles – a sign that they too should crouch down.

Suffering from sore knees, Virginia stood up and Boy, by now highly excited, took a flying leap at her, breaking her ankle. Virginia was driven to hospital in Nairobi.

On her return to the set, she worried how the lions would greet her.

‘They both ran to the car,’ she recalls. ‘Boy pushed half his body through the car window and rubbed his beautiful head against me. So I knew we were still friends.’

Her cottage is crammed with paintings of lions and elephants and photos of her four children, 11 grandchildren and five great-grandchildren. There is only one still from her distinguished film career, in which she starred in many heroic movies celebrating Britain’s wartime role: The Cruel Sea (1953), A Town Like Alice (1956) and Carve Her Name with Pride (1958) – about the heroic SOE agent Violette Szabo, GC.

That one photo, taken by Bill, is of a golden-haired Virginia, gazing in wonder at the young lion that played Elsa, the animal’s eyes alert for any sign of movement on the Kenyan savanna.

Virginia and Bill were married to other people when they first met in a West End play. Virginia was married to actor Denholm Elliot from 1954 to 1957, but they divorced after this coup de foudre.

Virginia – always Ginny to her friends – regularly lays flowers on Bill’s grave at her local church and has arranged to be buried in the same grave. ‘I believe in the afterlife – the life of the spirit – and know we will be together again,’ she says.

Grey curls fall softly over chiselled cheekbones today; the luminous beauty that captivated audiences remains. She laughs when I remind her that a junior officer in The Cruel Sea described her as ‘the glamourpuss in Operations’. But she really was a Picturegoer pin-up.

She says it’s been a full and lucky life – and she reveals just how lucky. She was nine –during the war – when her mother, an accomplished pianist, took her to safety in South Africa.

‘We were in a convoy of five ships leaving Liverpool for Cape Town,’ she says. ‘We were the last, delayed by an air raid. The other four ships were torpedoed and sank in the Atlantic. We saw the debris floating in the water. I see it still. For the mothers on the ship it was awful. They really felt what all those deaths, especially of the children, meant.’

In her movie career, Virginia starred with many of Hollywood’s biggest names. The studios saw her as a natural successor to Deborah Kerr, but life in La La Land was not for her.

She is discreet about the peccadillos of her fellow stars. But she recalls appearing with Yul Brynner in The King and I at the Palladium and helping him to dance on one leg, because of a bad injury he had as a trapeze artist before he was famous.

‘I had to swish my skirt vigorously around him, so the audience wouldn’t notice,’ she remembers. ‘Yul hated whistling because to him it was bad luck. Someone was whistling when he had his fall. If he heard whistling, all the rehearsals were stopped until the whistler was silenced.’

Her gentle, English rose countenance made for perfect casting as the governess. But it belies a lion’s heart.

Several years ago, I flew with her from Monaco to South Africa’s Eastern Cape, with brother and sister leopards in the hold. She’d battled for years to release them from a zoo set into the cliff below Prince Rainier’s palace in Monaco. Their cramped cage overlooked superyachts in the harbour and the Monte Carlo Casino.

Despite constant rejection, she never gave up, persuading Prince Albert, when he came to the throne, to transfer the leopards to a Born Free sanctuary.

Virginia says her love affair with lions began when she was five and friends came to tea at her parents’ Hampstead home. She was always asked to take off her favourite outfit, a children’s green bus-conductor’s uniform, and put on her best party dress.

‘Then I was wheeled on to recite Albert and the Lion, the old Stanley Holloway music-hall song, where the lion swallows the little boy after he’s stuck a stick in its ear. I hated having to take off my conductor’s uniform but loved to perform the poem.

‘I think it all started there.’