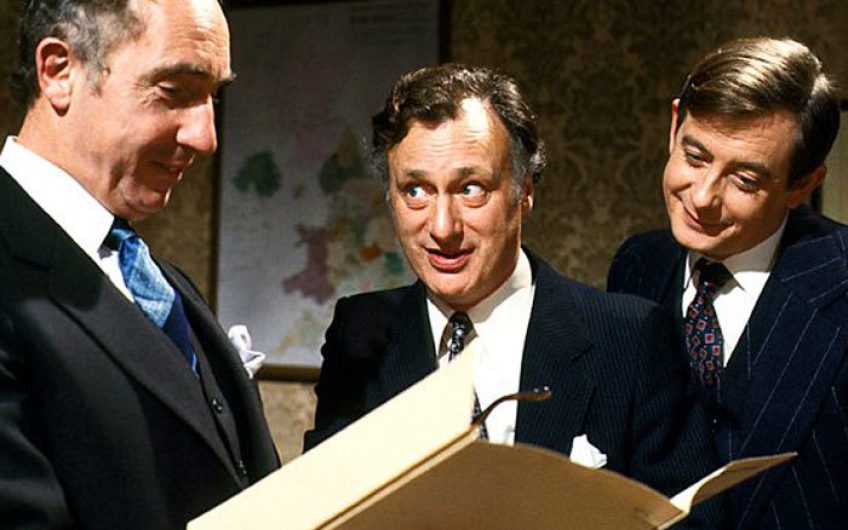 In 1980, with pencils sharpened and sketchbook under my arm, I made my way to a BBC rehearsal room.

On the first day of rehearsal, things are always a bit edgy – some people don’t know one another; others are old friends who have worked together before. When I arrived, the director, Sydney Lotterby, was already half an hour into rehearsal.

Sydney had contacted me to create the titles for a new comedy the BBC were working on called Yes Minister, written by Antony Jay and Jonathan Lynn. I thought, like others, that it was to be about the church. But now we all know it was a political satire based on the continuing battle between the government and the civil service. The first episode aired 40 years ago, on 25th February 1980.

It was probably because of my reputation as a political cartoonist for the Sunday Times, where I had worked for the past 15 years, having previously cut my teeth at Private Eye, that I was chosen. Sydney reasoned that, because of the political nature of the programme, having a real political cartoonist involved and making caricatures would lend the fictional characters credibility and make them seem like genuine ‘flesh and blood’ politicians.

On that first day, I watched the actors Paul Eddington and Nigel Hawthorne establishing their characters. I found Paul Eddington very friendly and forthcoming, but Nigel seemed almost shy and a little distant.

Having read the scripts, I knew that Paul’s character, Jim Hacker, was a rather plodding, self-publicising minister and that Nigel would be the Machiavellian member of the civil service who would run rings around him.

In the show, British snobbery raises its nasty head. Sir Humphrey Appleby, Jim Hacker’s Permanent Secretary, has a First in classics from Oxford’s fictional Ballie College, while Hacker is a graduate of the London School of Economics. Sir Humphrey rarely misses an opportunity to bring this up. The third essential member of the team was the character of Bernard Woolley, brilliantly played by the late Derek Fowlds, who sadly died in January, aged 82. Bernard wears a tie from Magdalen College, Oxford. As the series progresses, Hacker becomes more knowing and cynical and uses some of Sir Humphrey’s sly tricks himself.

In my political cartooning, I have frequently found myself, as Antony Jay said in the context of Yes Minister, unable to think up things as funny as the real events that happen.

Yes Minister and Yes Prime Minister seemed to confirm what the public suspect is very close to the truth. For example, politicians are a wily bunch who won’t answer questions. ‘Let me be perfectly clear about this,’ they say. What they really mean is ‘Let me obfuscate and muddy the facts as much as possible.’ The show capitalised on this brilliantly.

Often when I start work, there is an awkward moment when I sit and confront my subjects – or victims – head on. Although actors are creatures who are used to being gawped at on stage and film, some can squirm under the artist’s scrutinising eye. Being drawn is much more intrusive than being photographed or filmed, where a camera lens stands between the subject and the operator’s enquiring eyes – especially when, as a caricaturist, I won’t be ‘picking their best features’.

In the past, I have sometimes found it difficult to draw actors because, strangely, they don’t seem to have a character until they are acting a part. I can draw them in character but not in their own right.

A notorious example was Peter Sellers, who created the most wonderful characters – among them Mr Kite and Dr Strangelove – but personally could come across as rather bland. But Yes Minister would be different, because in it were the fictional characters I was to reproduce.

Sydney wanted the three characters to be animated for the title sequence. In true BBC fashion, there was very little money for the title sequence. Traditional animation, conveying movement by filming thousands of individual, hand-drawn and -coloured pictures, is labour-intensive, skilled and expensive. There are 24 drawings that flash before your eyes every second in a full-blown, Disney-type animation. That’s not the sort of money BBC budgets can run to; so I had to use more economical animation methods. In fact, I had to do everything myself.

To achieve what Sydney wanted, I revived the rostrum-camera method I’d used for a previous film I’d made, called I Think I See Violence All Around Me.

The BBC booked me several days in their rostrum-camera unit with the legendary Ken Morse, and I spent many laborious hours making drawings and photographing them by adding to them line by line.

The rostrum camera is fixed and points downwards towards the drawing board. I would begin the drawing with one pen stroke on the white paper. Then I’d take my hand away and click two frames of that line on 35mm celluloid film. Then I would continue and add to the existing line with another stroke, remove my hand and take another two frames, and then repeat the process, slowly building up the montage without my hand in shot. When the film was run at normal speed with no sign of my hand, the drawing appeared to be drawing itself, line by line – literally ‘taking a line for a walk’, as Paul Klee wrote.

Worryingly, this was a process where I could not see the end result, akin to the erection of a building brick by brick without plans. I wasn’t quite sure how it would end up or whether it would stand up. I could end up with Chartres Cathedral, or the Leaning Tower of Pisa – or a pile of bricks. Well, I think I got the Leaning Tower of Pisa. Not my best work but good enough, because the building-up process was apparently fascinating in itself.

I had no idea what a hit the show was going to be. Nothing is assured, especially in showbusiness. Sometimes what is apparently a highly successful package is put together and turns out to be a terrible flop. But a hit it was. The titles became quite iconic, the show was brilliant and, thanks to the scripts and the actors, it hasn’t dated at all.

I still get enquiries and requests for drawings from all over the Western world for any Yes Minister (which had 21 episodes, from 1980 to 1984) and Yes Prime Minister (16 episodes, from 1986 to 1988) material. Some years ago, the opening title drawing of the three main characters was bought by a gentleman in Hong Kong.

If it’s any commendation at all, it was Mrs Thatcher’s favourite programme. I certainly feel very honoured to have worked on it.