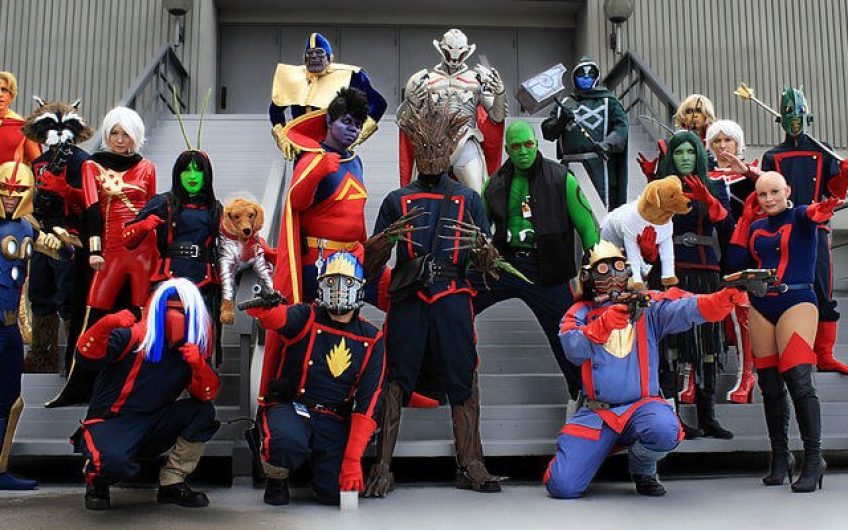 Comic-conventions, or comic cons, are a modern cultural phenomenon.

Huge weekend-long events, they’re dedicated to all things ‘geek culture’, from comic books, to tv series, to classic sci-fi films. Once the preserve of a few dedicated obsessives, they’ve gained a wide-spread appeal in the last decade.

Six large-scale conventions are held in London each year (with one on this weekend), with regional cons in almost every city from Scarborough (Sci-fi Scarborough) to Torquay (DEVCON). Birmingham plays host to multiple comic-cons in its leviathan NEC centre, and this year to a smaller affair at a local hotel tellingly titled ‘Not Another Comic Con!’. So what is responsible for the popularity and proliferation?

Part of the appeal of these events is the promise of celebrity. Attend a comic con and, in return for hours of queueing and heroic amounts of money, you can have your photo taken with the surviving members of the cast of Star Trek. The guest lists for comic cons are extensive and range from Hollywood A-listers, to beloved British character actors, to Harry Potter film extras. Bernard Cribbins is always a guest list staple - he is appearing at this weekend's London Comic Con weeks before he turns 90.

Beyond celebrity meet and greets, comic con attendees can listen to talks by publishing industry representatives on how to pitch ideas, or see film trailers not yet available to the general public. Primarily, though, comic cons double as gigantic market places, with stall upon stall selling everything from books and comics, to mass-produced Spiderman tea towels and Twin Peaks inspired bubble bath.

Self-employed artists (secretly there to network with the publishing reps) are nestled among these market stalls. I’ve been an artist at comic cons for 3 years now. I started by selling models of well-known characters that I sculpted from clay, though increasingly worried by licensing laws (perhaps unnecessarily given the sheer volume of knock-off Chinese merchandise and appropriated intellectual property that abounds at every convention) I now make custom creations; the attendees own fictional characters, or models of them in ‘cos-play’; the costumes they wear to the event.

Cos-play (both a verb and a noun) is an essential part of the comic-con experience. It’s a Japanese portmanteau of ‘costume’ and ‘play’ but all it really means is ‘fancy-dress’. About 80% of attendees have donned a costume for the occasion, some of which are truly spectacular; intricate handcrafted affairs that wouldn’t look out of place on a film set.

The best cosplays have a touch of creative irony about them; themed family costumes with children dressed as face-hugging larval aliens and their parents as doomed astronauts; or satirical interpretations of Scottish Disney Princesses decked out in wold and weaponry so they look like members of Braveheart’s army.

Cosplayers, however professional they may look, are never paid to be there, it’s simply a comic-con tradition. There are cosplay competitions at each comic con, but the real badge of pride is how many strangers want their photo taken with you.

In short the net effect of a comic con is something between a literary festival, a shopping centre, and an enormous, embracive fan-club. For most a weekend at one will be largely comprised of queueing and spending but the trade-off is complete escapism, a chance to live, eat and breathe your favourite obsession, and a sense of belonging that comes from shared fanaticism.

It’s a heady mixture and as a result comic cons only look set to grow further in number and size.