What is a bookhotel? - Hilary Macaskill 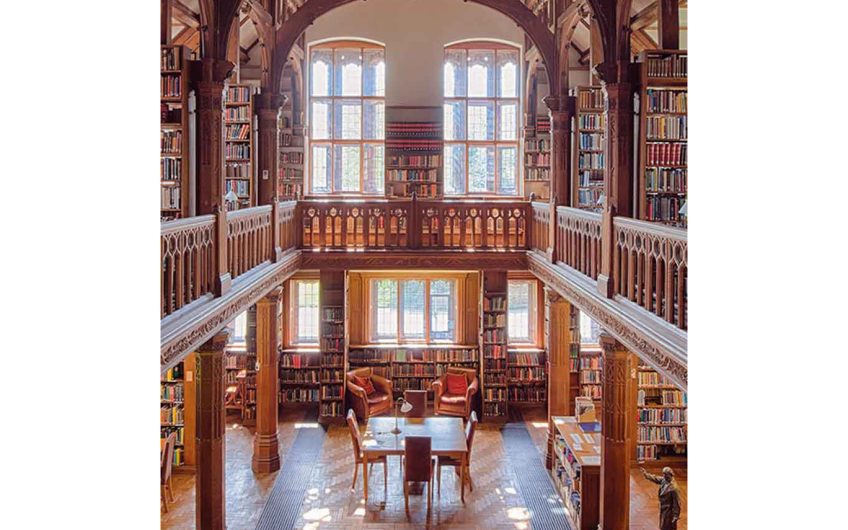 Despite originating fewer than 20 years ago, bookhotels have already taken Europe and America by storm. By Hilary Macaskill

They have libraries and literary attractions, from writers in residence to rooms dedicated to authors. For some hotels, it’s an appealing additional service; others were conceived from an idiosyncratic passion.

Hotel Sonnenburg in the Austrian Alps has wooden boxes of selected titles in each room. Berlin’s Hotel Friedenau focuses on local writers. Le Pavillon des Lettres in Paris has 26 rooms, featuring authors from Andersen to Zola.

We first heard about bookhotels in Germany in 2018. Our friend Gerd had moved his second-hand bookshop, Mephisto, online and to a village where he hoped to turn the Schloss into a bookhotel furnished from his huge stock, following the example of others in Europe (and America) that began to blossom in the previous decade.

We headed north to the pioneer, Gutshotel in Gross Breeson near Gustrow, opened in 1998. We arrived to find reception deserted, except for stacked boxes of books. In the subterranean restaurant (excellent food, we later discovered) was the waiter who showed us to our room. Its number was painted onto a real book, hanging outside (John Updike’s Couples).

A crammed, comfy reading room also had a record-player with LPs – and occasional books in English: A Pictorial History of the Wild West, Industrial Archaeology of Dartmoor – and Paul Clifford by Edward Bulwer-Lytton, where I discovered the first line ‘It was a dark and stormy night’ was not Snoopy’s literary invention.

Theming was meticulous. The corridors were lined with bookshelves. The walls were hung with classic paintings of readers. The garden was full of statues clutching books, down to the gnome lying in the pond.

Owner Conny Brock was inspired by visits to Hay-on-Wye where she’d met Richard Booth (1938-2019), ‘the king of Hay-on-Wye’. Her hotel policy was ‘bring two books; take one’ – resolutely being followed by a man with a ponytail who brought a bagful and started rummaging through boxes. Conny has a loyal clientele, allowing regulars to read in her own Private Collection room. Other rooms celebrate Alice in Wonderland and Treasure Island.

By the barn housing 250,000 books – and, now, the man with the ponytail, combing the stacks – there was a graffiti- scrawled train carriage from Berlin. It was a present from a guest, being transformed into the ‘gateway to Land of Oz’ by a working party of the regulars.

Oddly, the one thing missing was children. They’re not encouraged: ‘This is a place a place of respite and refuge,’ I was told.

We also visited the delightful Literaturhotel Franzosenhohl, set in woodland outside Iserlohn in the Ruhr. Here the books were new, recently published and laid out on racks along the light-filled hall. Reading was part of the hotel’s ‘wellness’ programme.

Home again, we felt deprived. Then we discovered Gladstone’s Library. Four-times Prime Minister William Gladstone, conscious of ‘readers who have no books and books who have no readers’, determined to open a library in his village, with a hostel for visitors. In his 80s, he trundled wheelbarrows of his books from Hawarden Castle. His largest bequest, for the library, was an astonishing £40,000.

In 1906, eight years after his death, the current building opened, with a library at one end, bedrooms (no televisions – just Roberts radios) at the other. Residents can stay in the library until 10pm.