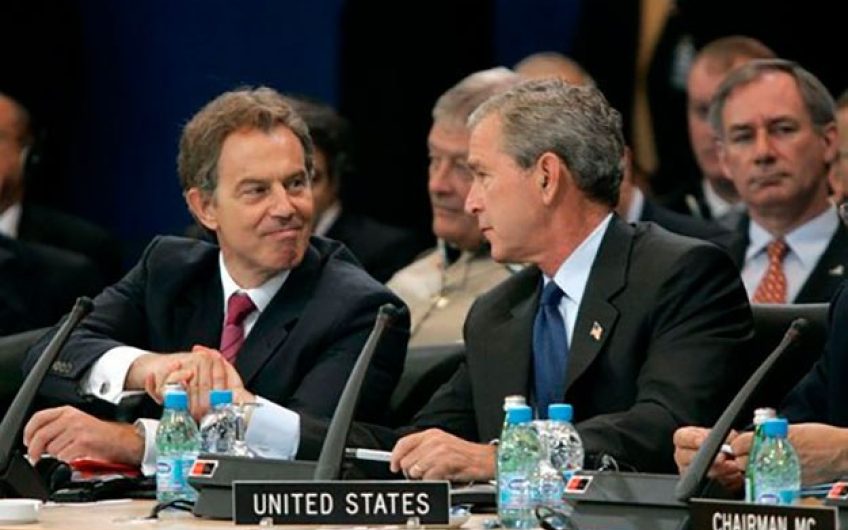 Tony Blair with George Bush - "A day like today is not a day for soundbites, we can leave those at home, but I feel the hand of history upon our shoulder with respect to this, I really do"
View Full Size
1
of 1

Michael Cockerell explains how a few words can mean so much

As they drove together in Mrs Thatcher’s car to a post-summit press conference, her private secretary had some advice for the then Prime Minister. ‘Do make sure you offer them a soundbite,’ said Charles Powell. ‘A soundbite?’ echoed Mrs Thatcher in her best Lady Bracknell tones. ‘What are you talking about, Charles?’

The hapless Powell tried to explain that a soundbite is a brief, pithy sentence that would be pounced on by the world’s television networks. ‘Read my lips — no new taxes’, had been George Bush’s classic of the genre in the 1988 presidential election campaign. And it suddenly dawned on Mrs Thatcher that her life at Number 10 had been measured out in soundbites.

But many of them had been produced for her. The playwright Ronald Millar, whom she later knighted, had come up with ‘the lady’s not for turning’ for an early conference speech. And he had suggested for her first television interview as Prime Minister: ‘No one would have remembered the Good Samaritan, if he’d only had good intentions. He had money as well.’ Mrs Thatcher duly uttered it on air.

Although she was unfamiliar with media jargon — much of it imported from America — Mrs Thatcher was the most television-conscious Prime Minister ever. She had learned from President Reagan how to use ‘the sincerity machine’: a nearinvisible screen from which she could read her speech while looking straight at the audience and the viewer at home. She had also been the mistress of the ‘photo-opportunity’, the first aspirant Prime Minister to give a press conference in the middle of a field clutching a 12-hour-old calf.

It was all a measure of how things had changed since Winston Churchill had been at Number 10. He always refused to appear on television. But the success of the televised coronation in 1953 convinced the Prime Minister that he should seek to come to terms with the cameras. In the strictest secrecy, Churchill arranged to have his own television screen test.

‘I am sorry to have to descend to this level’, lamented Churchill, ‘but we all have to keep pace with modern inventions. And it is just as well to know where you are in regard to them.’ When he saw the screen test, Churchill resolved to having nothing more to do with the ‘idiot box’.

Since then an army of self-styled image consultants has emerged to offer MPs entry to the strange, cold television world. They introduce politicians to the media’s language. As well as soundbites, there are noddies (a television reporter nodding in agreement with his interviewee), wildtrack (commentary on a film), doorstepping (unexpectedly putting a microphone in someone’s face for a comment as they leave home) and rough cuts (an early, unpolished version of a television programme). And the media gurus promise a magical transformation in their images. Producer David Wickes was called in by Norman Tebbit to coach some of the Cabinet before the last election.

‘I told ministers such as Nigel Lawson that the bedrock of all media success is plain language,’ says Wickes. ‘The average Briton understands fewer than 5,000 words, while university graduates regularly use some 18,000 words. So the message is KISS — keep it simple and short.’

'The TV camera is a searching instrument which invites the closest scrutiny of its subjects,’ continues Wickes. ‘I told the Cabinet that there are no prizes for bad haircuts, rumpled clothes, stained teeth or dandruff. If a politician does not care about his appearance, even in front of millions, what else might he not care about?’

Wickes produced a private and confidential briefing paper for Cabinet ministers. It concluded: ‘Like the lovelorn, television audiences have a thirst for caring words. Use them. The response will surprise you. A whiff of passion brings you and your policies alive. Remember, if you are going to a studio, prepare your headlines, rehearse your answers, wash your hair, arrive early, lie down for five minutes, change your clothes. Then go for it. Your performance will be transformed.’ Another image consultant is Mary Spillane, whose company is called Colour Me Beautiful. An American who once worked in Jimmy Carter’s White House, she has advised more than 70 MPs and ministers. Mrs Spillane applies her ‘seasonal colour system’ to politicians, taking their skin tone, eye and hair colour as a starting point. Everyone resembles a season, she claims. John Major is a cool summer, Paddy Ashdown autumn, Norman Tebbit deep winter and Neil Kinnock is a spring person, because of his light colouring. She advises politicians on how to dress for their season.

For the coming election campaign, Mrs Spillane is teaching some male candidates to wax their eyebrows, others to ensure they powder their beardline before evening meetings. She has issued a set of tips to her clients. ‘To ensure your image never becomes a campaign issue, prepare an interchangeable, high-confidence, survival wardrobe. Don’t drink alcohol up to six hours before a television interview. And use positive, energetic yet nonthreatening body language.’ ‘Remember,’ concludes Mrs Spillane, ‘fifty-five per cent of the impression you make on television depends on your appearance, 38 per cent on your voice and body language. And the sad reality is that only seven per cent depends on what you actually say.’