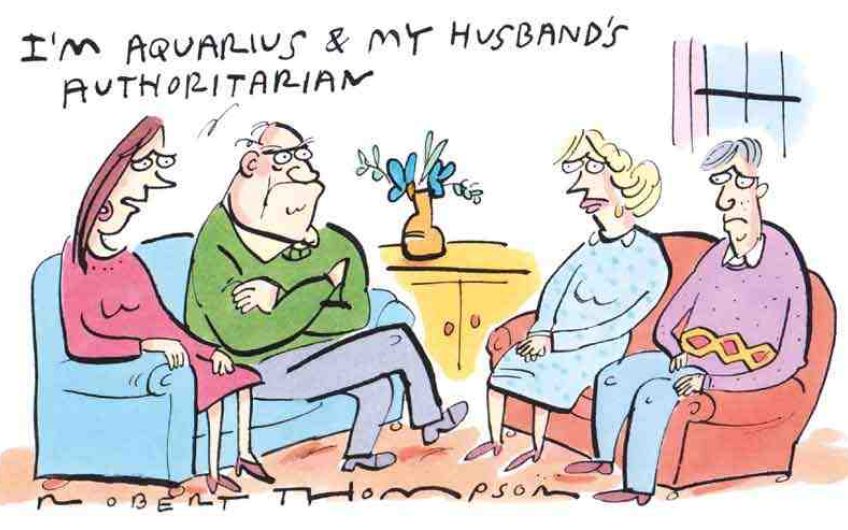 Beware of spending too much time at home, says Mary Killen; these are the perfect conditions in which Fritzling flourishes.

Josef Fritzl (born 1935) is the jailed Austrian monster who imprisoned his daughter in an underground cell and had seven children by her.

But Fritzling has nothing to do with that sort of unspeakable, criminal abuse. Oh no! Fritzling is perfectly legal and even encouraged by the authorities, a factor that makes this pop-up syndrome even more chilling. It is best described as ‘domestic tyranny lite’.

Lockdown provided the ideal conditions for Fritzling to flourish. It happens when a previously mild-mannered man – (female Fritzls make up only a tiny percentage of enthusiasts) – embraces lockdown restrictions with overt enthusiasm.

Fritzl interprets the rules with draconian inflexibility. No, he tells Mrs Fritzl, her ‘outside exercise bubble’ is restricted to only one person – not a series of single people. No, she should not walk to a neighbour’s garden to take a cutting. ‘It’s against the law. If everyone bends the rules, then we’ll never beat the virus.’

Fritzl revels in the postponements and cancellations of weddings and is delighted when funerals become Zoomerals. He always grumbled about dinner parties. Now he grumbles about Zoom drinks. Fritzl hated Claps for Carers – it allowed smiles to be exchanged.

With the shopping, Fritzl appoints himself Quartermaster. He decrees that it’s safer if he alone buys the food. He will be the one to decide what will be eaten and when. Suddenly, there’s a lock on the larder door.

He is not extravagant. ‘Turnips in; avocados out!’ smirks Fritzl.

At first Mrs Fritzl quite enjoyed someone else’s taking on domestic chores – especially with the one-way systems in supermarkets and the fact that chatting between shoppers was discouraged. But she doesn’t actually like corned beef or mouldy, sprouting potatoes from a sack.

The novelty quickly wears thin. ‘Who’s that knocking?!’ yells Fritzl, arming himself with a poker when Amazon Grocery, instructed by Mrs Fritzl, drops off luxury products to outwit him.

One Mrs Fritzl realised things had gone too far when her husband stopped a lifelong friend from dropping off some hens for her coop. Fritzl pre-empted the pleasant, outdoor handover with a pompous letter citing an obscure countryside regulation against poultry transportation during lockdown. This Mrs Fritzl says, ‘It all came to a head when he stopped me from slowing down the car to talk out of a window to a neighbour I passed in the lane.’

Fritzl tapped into a syndrome described by Timothy Snyder in On Tyranny. What gets the dictator going is Assumed Compliance from the public. There is something in human nature that welcomes the strong. Once dictators start throwing their weight around, a large percentage of the population is only too grateful to obey orders and stop having to think for themselves.

Domestic Fritzling appeals to only a few women. The most extreme variant is Annie Wilkes, in Stephen King’s Misery, who imprisons her favourite writer, Paul Sheldon, after an accident. She hobbles his legs to keep him prisoner.

Female Fritzling-lite saw one woman hide the scissors to prevent her husband from taking back control of his hair. It grew six inches while barbers were closed. Another fattened up her husband by an impressive two stone.

In both cases, the men were way too popular with other women. Lockdown provided a rare opportunity to see off romantic rivals – especially when the decline in looks was posted on social media.

Why do I know so much about the behaviour of Fritzls? I’m married to one – Giles Wood, The Oldie’s Country Mouse.