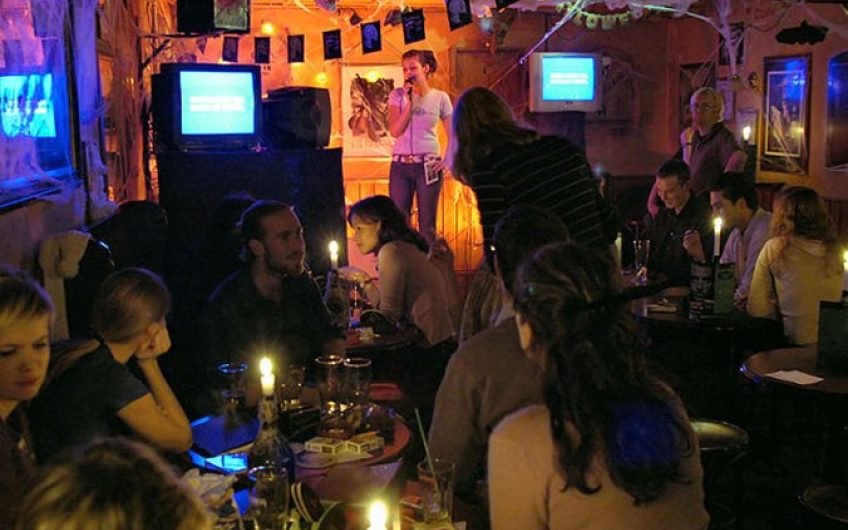 Singing in public can be a risky business, as Peter Brooke MP has recently discovered. Though, on the face of it, less immediately perilous than mountaineering, hard drugs or living in Washington DC, impromptu warbling can undermine the most august reputation, and can even end careers. It’s not even as though Mr Brooke was any good at it. Calls for his resignation may have been prompted primarily by political considerations, but they would also have been at least partly justified by the performance itself. Mr Brooke may be an estimable entertainer in his field, but he is unlikely to bring the house down at the Bradford Alhambra. And yet Mr Brooke is not alone in his desire to break into song for no apparent reason. Although this strange compulsion has affected many people down the years, from stars of musical comedies to overexcited taxi drivers, it appears now to have attained epidemic status with Karaoke. Three or four years ago, this quintessential Japanese phenomenon was unknown in this country. One or two sniggering television documentaries had appeared, showing Japanese executives in Tokyo clubs waiting for their chance to perform Tom Jones’s Delilah — but never did anyone think for a second that Karaoke might catch on in Britain. Indeed, only in a handful of louche West End clubs, where visiting Oriental businessmen came to escape the horrors of Occidental life, could one witness the ritual at first hand.

Intrigued, I and some friends visited just such an establishment in early 1988. Small but viciously expensive, the club nonetheless had room for a small stage and a video jukebox, and the assembled diminutive captains of industry thought nothing of grabbing the microphone between courses and belting out remarkably accomplished versions of old Elvis Presley hits. Tears rolled down their cheeks as they dreamt of their homeland, before they returned to their tables and discussed which foreign industry to buy up next. Did Lord Hanson also do this in his spare time? It was hard to imagine. However, in the cause of research I and my companions also performed a few numbers, including a depressingly poor version of the Mamas and the Papas’ California Dreamin’, our harmonies rendered less than note-perfect by the huge amounts of sake we had to consume in order to do it in the first place. Sadly, one of our number was wired for sound, and recorded the whole farrago on cassette. He retains the tape as security for his old age.

Despite this summary humiliation, though, we all agreed that Karaoke had its merits, although none of us expected it to infest British popular culture quite as quickly and as thoroughly as it has done. A mere four years later, Karaoke is everywhere. Every dodgy pub worthy of its name has a regular Karaoke night, at which drunken office workers sing their favourite pop classics over pre-recorded backing tapes to audiences of other drunken office workers . Photocopier salesmen croon idiosyncratic versions of Desperado. Girls with big hair duet on You’re The One That I Want, eyeing up the marketing men of their choice. Paul Gascoigne lookalikes perform vicious professional fouls on Don't Be Cruel. All are reading the words from a conveniently placed video screen. Most are suddenly realizing they don’t actually know the tune. Some are trying not to throw up. None can sing.

Needless to say, a number of people are making a lot of money out of this. The firms who supply the equipment are laughing, as are the musicians who record the backing tapes — those that have been released commercially have sold well. And no one loves Karaoke more than the pub landlord: most participants still need to be seriously oiled before they take to the stage. Karaoke is not for wimps. Liver damage is but an occupational hazard. What you need is a clear eye, a lack of inhibition, and a successful career in marketing — as well as a strong desire to cop off with the blonde girl from Accounts.

For unlikely and swiftly regretted sexual liaisons are another essential component of the Karaoke experience. Spectators can observe the inexorable development of what will later turn into entirely inappropriate one-night stands, involving much embarrassment in the morning and a lot of strange looks in the office. It would be interesting to find out how many successful relationships have begun as a result of Karaoke. It would be fascinating to find out how many others have ended.

Sadly, however, such speculation is the only genuine entertainment to be had from a Karaoke night, unless you are taking part, extremely drunk or, ideally, both. While the Japanese businessmen could at least sing, listening to young British men with blank eyes and white socks destroy your favourite pop songs is a curiously depressing way to spend an evening. It may be just a craze, and pubs may again become the pleasant repositories of compact disc jukeboxes and fruit machines that we used to know and love. What seems likelier, though, is that Karaoke will become a permanent feature of British life. Peter Brooke may have much to answer for.

Come and learn the secrets of London