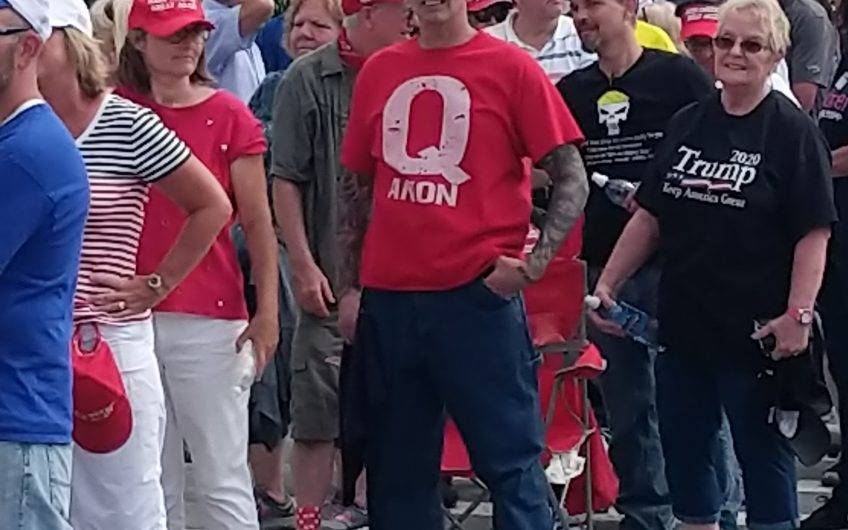 QAnon is a far Right conspiracy theory that started with a 2017 post on an internet site by an anonymous person under the pseudonym 'Q' – thus the name QAnon.

It was on 28th October 2017 that this person, calling themselves “Q Clearance Patriot”, popped up on the anonymous internet messageboard 4chan. Q claimed to be an American government official. He (or she?) had important “crumbs” to share: President Trump was orchestrating a “countercoup against members of the deep state”.

The deep state? Oh you know, the Clintons, Barack Obama, Bill Gates, George Soros, various Hollywood actors. The ones who had recently orchestrated the massacre in Las Vegas that killed 58 people. The ones who had a secret plan to set up a sort of techno-dystopian global communist state. The ones who like to cut up babies and wear their faces as masks. The ones Trump was trying to sort out. The “storm”, said Q, was coming.

Thus began the QAnon phenomenon, the most widely believed and shared conspiracy theory of the modern age - a storm in and of itself. Q also takes in elements of pretty much every conspiracy theory ever. You know the sort of thing. Jews run the world. Black Lives Matter is run by Marxist paedophiles. Hollywood is a nest of Satan worshippers. Stuff about Atlantis and the Pyramids, too.

As Q issued more cryptic dispatches and his online followers racked up millions of clicks trying to interpret them, QAnon metastised. The death of Jeffrey Epstein was soon folded in; anti-vaxxers and anti-5G campaigners found common cause. Donald Trump, cast as the hero in this grand drama, gleefully fanned the flames. By 2018, supporters were showing up at his rallies wearing Q paraphenalia.

The social media hashtag #SavetheChildren began to be used by groups of Q-supporting (often heavily armed) parents on social media, aparently sincere in their belief that Hillary Clinton wanted to eat their children. Apparently, they were unaware or unconcerned that Q had emerged on a site notorious for child pornography.

QAnon is like Japanese knotweed, impossible to get rid of. Ridicule and persecution only entrench the belief. A common refrain of Q followers is “when I started doing my own research…”.

QAnon followers are also likely to be old. Young people tend to more savvy when it comes to supposedly top-secret, classified, incriminating documents found online. They also don’t tend to use Facebook any more - which has been one of the main disseminators of the QAnon worldview.

Trump has never convincingly disassociated himself from QAnon. His refusal to accept defeat in the 2020 Presidential election has strengthened its core claims in its supporters' views. Meanwhile, the Georgia Republican Marjorie Taylor Green became the first QAnon supporter to win a seat in the US House of Representatives.

And COVID-19 has provided optimal conditions for Q to go global. The Dominic Cummings Barnard Castle Episode was somehow folded into the British version.

The best advice if someone in your life is going Q? Listen respectfully. Be kind. Loneliness and isolation are the biggest gateways to believing in QAnon.