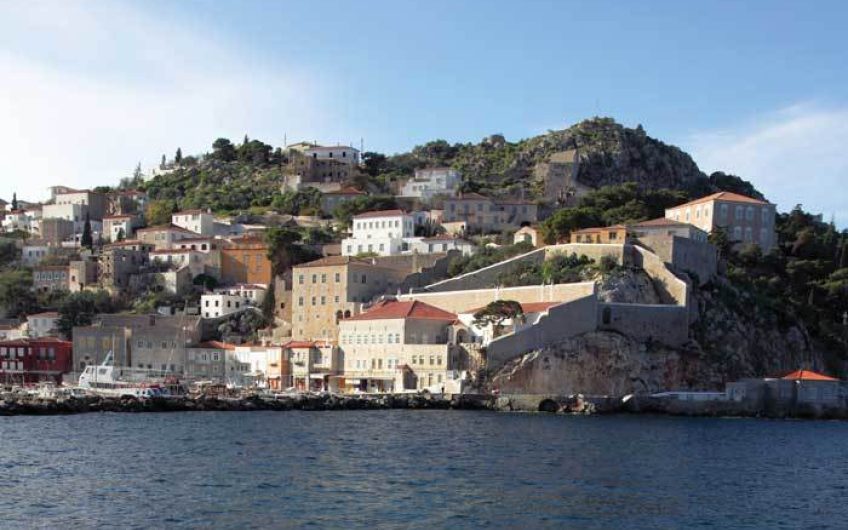 The approach to Hydra
View Full Size
1
of 1

The car-free Greek island is the star of the new film about Leonard Cohen and Marianne Ihlen. Rosie Boycott spent a blissful week in their footsteps off the coast of the Peloponnese

The house we stayed in on the Greek island of Hydra last summer, belonging to Julie, an American friend who had recently celebrated her 78th birthday, was right at the top of the hill between Hydra Town and the little fishing village of Kamini. To the coffee shop on the harbour, where we went almost daily for breakfast, it was 362 steps down cobbled lanes that wound between the whitewashed houses, views of the Aegean glimpsed around every corner.

Julie has a particular liking for this coffee shop facing the harbour. It was there that she had pitched up in the late Seventies, stopping, she thought, for just a couple of days. Leonard Cohen was seated at the next table and they fell into conversation. He persuaded her of the charms of Hydra and, 45 years later, she’s still coming back. Cohen lived there for six years and stayed for months at a time, writing the novel Beautiful Losers in his house on the hill.

It is easy to see why. Hydra is a place to be, not a place to be seen. There are no cars, no bikes, no vehicles of any kind. A row of donkeys lines up to meet the ferries from the mainland, ready to transport you and your suitcase up the hill to your lodgings. There are no new buildings; indeed, there are only Hydra Town and Kamini, sandwiched together on the north side of the island. While the harbour pulses with life, the lanes up the hills are tranquil time warps of an older Greece. Hydra’s serenity has been preserved by a ban on building in the town itself, a Greek National Monument which has scarcely changed in a century.

A few years ago, Richard Branson applied to build a ‘luxury hotel’ above Kamini, planning to construct a helicopter pad and a cable car which would whisk his guests down to the beach without any effort. He fought a hard and expensive battle but his request was, thankfully, turned down. Making the effort to walk up and down to Julie’s house a couple of times a day became a big part of my Hydra holiday. The other part was the swimming. Hydra has no sandy beaches. There are no buckets and spades and virtually no children. You swim from a pebbled beach or straight off the rocks, into which handy iron ladders are fixed at convenient intervals. The lack of sand means extraordinarily clear water: with a snorkel you can see down to a great depth and there are a good many fish to keep you amused.

Every morning, Julie and I would walk down to the small rocky beach nearest to her house, where Julie’s early morning swimming club meet for exercise and hot chocolate. At 62, I was the youngest by a mile: the eldest was a 91-year-old Russian prince who had been living on Hydra since the Fifties, as had a countess in her 80s, an escapee from Middle Europe in Iron Curtain days. Patrick Leigh Fermor lived for a while on Hydra, in a house across the valley from Julie’s. The only AA meeting on the Peloponnese takes place on Sunday nights in the home of a long-retired diplomat, whose kitchen looks more as if it belongs to a country house in England than to a home on a sun-soaked Greek island (people arrive by motorboat from nearby islands to attend). Hydra has been attracting a certain type for many years – the traveller, the bon vivant, the escapee – and many very good artists. It’s as though the characters of The Balkan Trilogy had up-sticked en masse to a second home.

The novelist Raffaella Barker tells a delightful tale about her father, the poet George Barker. Many years ago, he was staying with the artist Tony Kingsmill on the island and after a week Kingsmill said to him: ‘Let’s go and meet the ferry. I have a present for you.’ Barker growled back: ‘To hell with the present – bring me a future.’ ‘I will see what I can do,’ replied Kingsmill, and off the ferry stepped Raffaella’s mother.

We made one expedition off-island. From Athens, Hydra is two hours by ferry, but to get to the mainland, just five miles away, you have to hire a water taxi. The trip over took twenty minutes and from there we rented a taxi to take us to Mycenae and the astonishing theatre at Epidaurus. We stopped overnight in beautiful Nafplio, and were back on Hydra by teatime, having seen some of Greece’s major sites. It was September and very hot and a relief to be on the island again.

There are a number of guesthouses and small hotels but by far the nicest is the Bratsera, located just behind the harbour in the old sponge factory. The owner’s family had been divers for centuries, ending up with a profitable processing factory. When the sponges died out due to over-harvesting and the world settled for Chinese-made fakes, owner Christina turned the factory into a twenty-room hotel, built a swimming pool (a rarity on the island) and decorated the walls with fascinating glimpses of the tough and treacherous trade. We had dinner there twice and the food was very good.