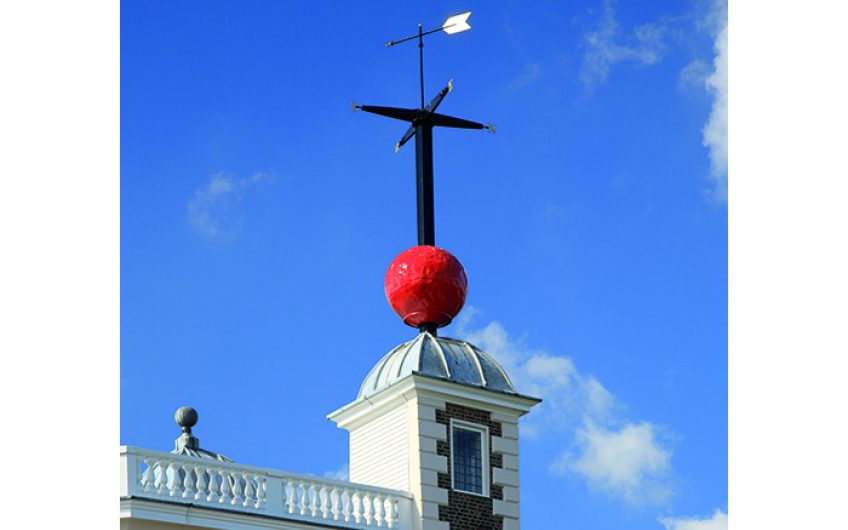 The history of the time ball, from a small town in Kent to Times Square, New York. By Karen Peck

On the seafront in Deal, Kent, stands a tall tower topped by a mast with a large, black ball. This is a time ball tower, once used by ships offshore in the English Channel to set their chronometers accurately, essential for calculating longitude at sea – an early GPS system. Time balls were erected around Britain and the world; only a handful remain.

In 1818, Captain Robert Wauchope had the idea of having a large signal in ports that would at a specific moment give the exact time. In 1829, after extensive campaigning, the Admiralty agreed to the erection of the first time ball in Portsmouth. This was followed by one at the Greenwich Observatory in 1833.

In Greenwich at 12.55pm, a red wood-and-leather ball would rise halfway up the mast. At 12.58pm, it rose to the top. Then, at precisely 1pm Greenwich Mean Time, the ball would drop. The point at which the ball dropped signified the exact time to ships on the Thames. The Time Ball in Greenwich still drops every day – but now as a tourist attraction.

With the introduction of the electric telegraph in around 1850, time balls could be located some distance from the source of mean time (ie Greenwich), enabling them to be operated remotely.

In Deal, the drop was triggered by an electric signal from Greenwich along the telegraph wires of the South Eastern Railway. Established in 1855, the Deal Time Ball became obsolete in 1927 with the introduction of more reliable radio time signals. The recently renovated tower is home to the Time Ball Museum. The Time ball is still dropped at 1pm and on New Year’s Eve. It’s controlled by the atomic clock at Anthorn Radio Station in Cumbria.

The coming of the railways brought in the need for a national standard time. Greenwich would send telegraphs to railway stations at 1pm each day, so they could set their clocks to London time. Jewellers and watchmakers particularly appreciated standardised time. A Leeds company, Dyson’s, built its own time ball.

In Manhattan in 1904, the publisher of the New York Times wanted to host a New Year’s Eve fireworks party in Times Square. He never got a permit for the fireworks but, three years later, he had installed his own time ball – a 700lb ball of iron and wood covered in light bulbs and lowered from a flagpole on the stroke of midnight.

Today the New York time ball is far more glitzy, weighing nearly six tons and made up of 2,688 Waterford crystal triangles and 32,256 LED lights. The drop is initiated by a laser-cooled atomic clock in Colorado – a far cry from the days when time balls were winched to the top and released by a hand-operated trigger.