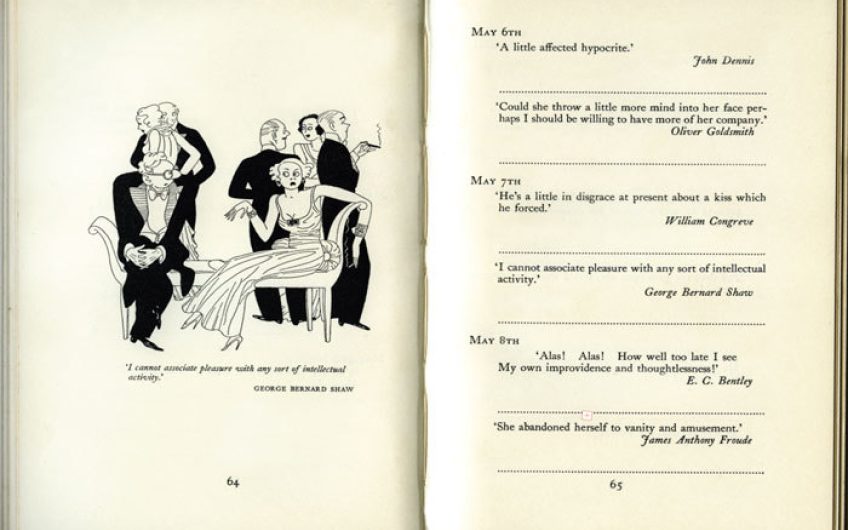 It was compiled by Nicolas Bentley, with pointed or rude remarks for each birthday boy or girl, drawn from classical authors, plus a few living ones, such as Shaw, Belloc, J B Morton (Beachcomber) and Aldous Huxley. Nicolas Bentley also drew the pictures.

Usually there are two quotations, the first intended for males, the second for females, each followed by a dotted line on which you signed your name. In practice, people would artfully pick the wrong one if they thought it the less beastly, i.e. less accurate. In my copy, a future television producer had nabbed, ‘That ready wit may create many admirers but take my word for it, it makes few friends’ (Lord Chesterfield), leaving the future wife of David Freeman no option but to settle for a sexist plonker from Lord Byron: ‘To others’ share let female errors fall / She had not even one – the worst of all’.

Evidently I acquired my copy second-hand or remaindered, because it was published (by Methuen) in 1934 while the earliest entries preserved in it date from 1943, my last term at school and first term at Cambridge on a Royal Engineers short course. Who can Betty Noyes have been, ‘Whose heart was pure although her mind was shady’ (W J Turner)? Ah, she was a bewitching student member of the London School of Economics, which had been evacuated to Cambridge, and briefly my girlfriend. Denis Gardner, who succeeded me in her affections and also got a rugger blue, has rather mysteriously opted for a clearly feminine second quotation – ‘Can this be woman! Lovely and beloved!’ (Matthew Gregory ‘Monk’ Lewis) – adding a manly ‘No’.

A second stratum of entries dates from 1948, when I was at St Andrew’s as an ex-service student. A third is circa 1979, when a daughter found the book in a box of old books in the loft and appropriated it. She, too, was just finishing school before going on to university, and an interesting thing about this generation of young persons is that they are much more casual about the BBB’s rather ponderous assembly of ruderies. They ignore them, draw pictures over them or append sloppy messages. Having dutifully subscribed his name to a litany of abuse from George Borrow, one schoolmate adds plaintively, ‘I am not horrid really’. The one or two striking bullseyes among the insults can be ascribed to the law of averages, I suppose. I hope that the eminent anthropologist Ian Whitaker, who came from Nottingham and cuts a commanding figure, won’t mind being reminded of his draw (pictured left): ‘The pear-shaped figure recalled that which is conventionally attached to the citizens of Nottingham’ (Hilaire Belloc). As for the writer and pundit on sexual matters, William James, he should be well pleased with what he copped half a century ago from E C Bentley:

‘Ought to have thought twice

About being a monster of vice.’