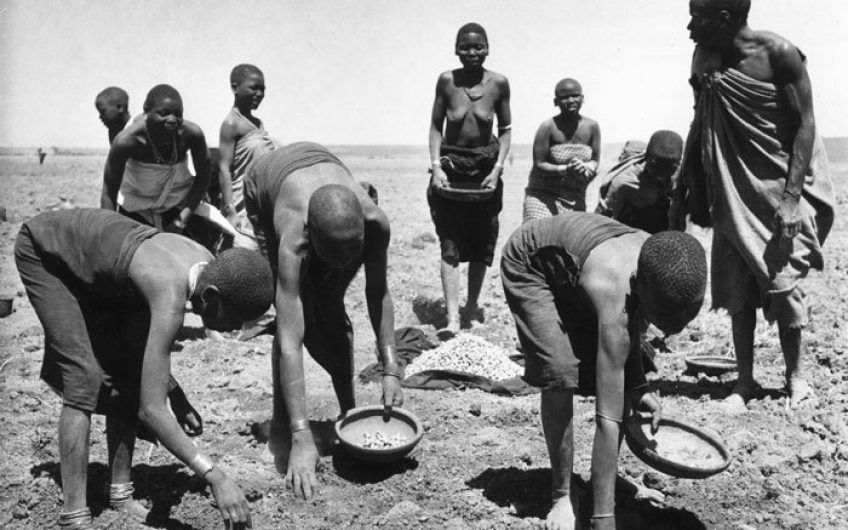 Many readers will be able to recall that not so many years ago, and certainly well within living memory, we were suffering from chronic shortages of food. Even bread was still being rationed in 1948. In the 1940s there was an urgent need to restore fats to their proper place in the national diet. This deficiency was unlikely to diminish unless fresh sources were made available.

It was against this background that, in 1947, the government took on board a proposal made by the United Africa Company (part of the giant Unilever company), who had suggested a project, initially called the Monkey Nut Plan, but later given the more inspiring name of the Groundnut Scheme.

This proposition involved clearing 3.2 million acres of bush land in British East Africa (then known as Tanganyika and now Tanzania) and planting it with peanuts (also known as groundnuts and monkey nuts): when harvested and processed, they would cure at a stroke the chronic shortage of edible oils. After the vegetable oil had been extracted from the peanuts, the residue could be converted into fibre for the manufacture of clothing, and the plant foliage would provide animal feeding stuffs. On the face of it,

a brilliant concept all round – the shortage of fats, clothing, and animal feeding stuffs being resolved by the humble peanut.

The Treasury was willing to provide the substantial funds required on the grounds that it would transform the balance of payments. Although the 3.2 million acres selected for the project were mainly waterless, certainly fly infested, and almost uninhabited, these snags never appeared to enter the equation.

The Ministry of Food was given responsibility for the project, and the Food Minister, John Strachey, embraced it with great enthusiasm, forming the Overseas Food Corporation to assume executive control. This vast programme, which was embarked upon like a military operation, called for the construction of a new port, railway system, airstrips and roads, together with all the infrastructure to cater for the 32,000 African and 2,000 UK personnel employed on the project. The scheme had attracted a huge amount of publicity, and when they began to recruit men for the ‘Groundnut Army’, almost 100,000 ex-servicemen applied.

Entirely untried and untested, the venture was extremely speculative, and in the first year only 7,500 acres were cleared and planted. However, such was the enthusiasm generated by Strachey, who described the first year’s problems as being merely ‘teething troubles’, that the full-scale operation continued undeterred.

During the next couple of years more land was cleared and planted, but as the project expanded, the problems multiplied. Rainfall was much below predictions, leaving the red soil in the cultivated areas with the appearance and consistency of a hard tennis court and a tendency to wear away ploughs and other implements. Indeed, with only a minute addition of cement, the soil was used

to make bricks for houses and offices.

Lack of water for both cultivation and human consumption was a constant problem. Boreholes were sunk, and after many abortive attempts water was struck at 125 feet, but unfortunately it tasted strongly of Epsom salts. In fact it contained what was near enough to Epsom salts, and it had the usual effects of Epsom salts. Another problem arose when putting the Africans to work on the mechanical equipment, as they were only recently out of the bush, and their previous experience was confined to hand-held hoes.

In the meantime Imperial Chemical Industries were coerced into constructing a factory in Ardeer, Scotland, for the sole purpose of converting peanut protein into fibre. The trade name Ardil was registered for the fibre, for which they had a planned initial output of some nine million kilos per year, but as with the scheme in general, everything that could go wrong, did go wrong. When garments made with Ardil fibre were washed or dry-cleaned, they had a tendency to snap (like the peanut shells from which they were made), and having a cracking pair of Ardil trousers took on an entirely different meaning. The whole operation turned out to be a grotesque and scandalous waste of public money.

After the election in 1950, John Strachey was removed as Food Minister, and his successor, Maurice Webb, announced the project would be abandoned. By this time the scheme had cost the British taxpayer some £49 million, a huge sum at the time. Strachey became a figure of fun. In the radio show ITMA he was frequently portrayed by Tommy Handley as Mr Streaky and for years afterwards, at any Labour Party meeting, a solitary heckler could have them rolling in the aisles simply by shouting ‘groundnuts’.

Perhaps the ill fated but well intentioned venture was best summed up by a member of the opposition, who described it as being ‘just nuts!’