What was the London Cyclist Battalion? - Ian Davidson 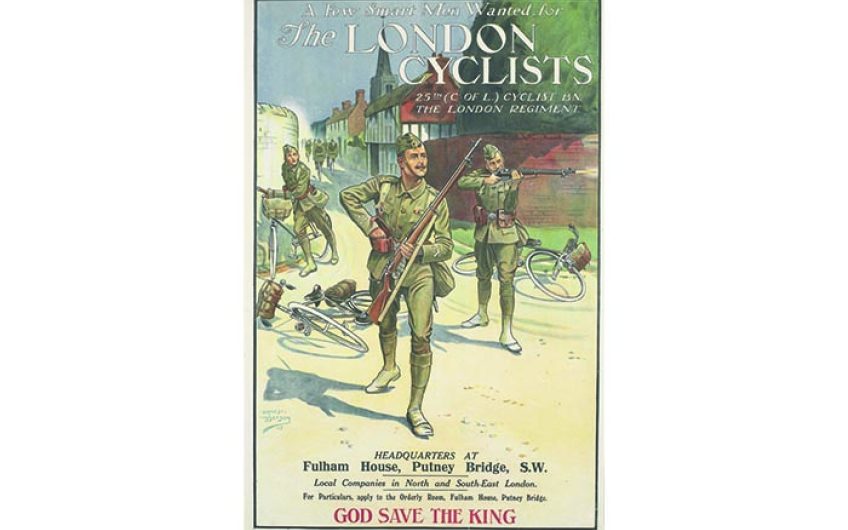 All cyclists to attention! How bicycles were weaponised during the First World War. By Ian Davidson

The 25th (County of London) Cyclist Battalion was a bicycle battalion of the London Regiment of the Army. Founded in 1888, it was converted to a unit of the Royal Corps of Signals in 1922.

My grandfather Alfredo Free played the violin in the orchestra and the cornet in the band of the Cyclist Battalion on the North West Frontier in 1917. Forty years ago, I was telling Michael Palin about him when he suddenly jumped up from the table. ‘Good Lord!’ he cried and shot out of the door. He returned and thrust a book into my hands: The London Cyclist Battalion: A Chronicle of Events connected with the 26th Middlesex (Cyclist) VRC, and the 25th (C of L) Cyclist Battalion, The London Regiment, and Military Cycling in General.

How did Michael come to have the book? His fellow Python Terry Jones had spotted it and bought it as a present for Mike, back when they were writing Ripping Yarns, that series of absurd Boy’s Own Paper-style stories with titles like Across the Andes by Frog.

Bicycles, as they were better designed and built, became more and more popular throughout the nineteenth century. In 1887, Lt-Col A R Savile – a bit of a touring ‘wheeler’ himself – mustered the first parade of what he hoped would become the Army’s ‘cycling arm’ and thus earned the title the Father of Military Cycling. A Territorial unit was established in 1888 with 216 men. Sixteen of them were musicians – I’m sorry to say they got off their bikes to play.

In the 26th Battalion of the London Regiment were Lt Rucker, the amateur trick rider, and C A Smith, the Bath Road champion. Savile led the battalion on his tricycle, followed by all manner of machines (they brought their own), with rifles fitted on the front forks, speeding past in file with only a foot between them. There was even a Victoria tandem – 16 men on one bike.

On his bike, Colour Sergeant Jack Rule could rise from the firing position, mount, advance 100 yards and fling himself down to fire again in 21 seconds. At the Royal Tournament of 1897, he performed his most amazing feat – picking up a wounded man from the ground while travelling at speed. For these public performances, all ranks were in the same gear – and thus pedalled in step.

Major du Maurier’s popular play of 1909, An Englishman’s Home, featured a brave cyclist. Men from Harrods, encouraged by the firm, joined in 1913.

In August 1914, the battalions – now there were two – were in summer camp. Thereafter, they claimed to have been the first unit of the entire Army to be ready for action.

Someone on the General Staff must have read Erskine Childers’s The Riddle of the Sands (1903) because the 25th and 26th were sent off to patrol the east coast for three years.

In 1917, they surrendered their bicycles and were sent to India. In 1919, they fought in the Waziristan campaign; several of them died in the Khyber.

H H Gayler, holder of the world’s unpaced 12-hour amateur record, was killed with other members of his picket when their outpost was overrun on a hill overlooking the Khaisara valley.

Grandfather didn’t get Spanish influenza in 1918. Everyone apart from the band did. The battalion came home in 1919, never having pedalled in anger.

A huge black bicycle leant against Grandfather’s garage wall, its mudguards like cast-iron guttering. The only time I saw him ride it, he fell off.

Chompin’ and chortling at The Savoy

End of the line - Benedict King on giving up commuting