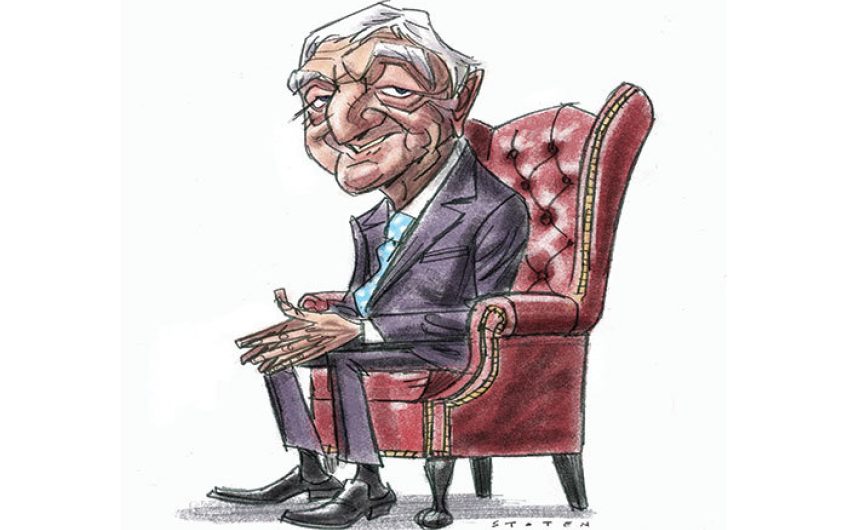 Michael Parkinson was the first person to befriend me in journalism. In 1959 I had gone straight from university to the Daily Express in Manchester on a month’s trial. In those days, you were supposed to have done a couple of years of Births, Deaths and Marriages on something like the Sheffield Telegraph before you could hope to graduate to a national paper – I can’t say I was greeted with open arms by the hard men of the newsroom.

One Sunday I was sitting in the Red Lion in Didsbury, and this chap came up and said I looked a bit unhappy. I told him the situation, and he said his name was Michael Parkinson and he worked on the Guardian. I’d better come home to have lunch with him and his wife Mary, he said. Which I did, with gratitude. And on many, many other Sundays to follow.

The two things I most remember about him in those days were his scathing views on working for a popular newspaper, and his insistence that the North was the backbone of the nation. He would never abandon it, he insisted. But within two years he had taken the Beaverbrook shilling and had become a feature writer on the Daily Express in London.

We had kept in touch, and in 1968 the ‘D’Oliveira Affair’ had blown up. Basil D’Oliveira was a cricketer who was born in South Africa, but because of his colour (he was of Indian/Portuguese extraction) could not play for South Africa because of its vicious Apartheid rules. So he came to England and became a regular member of the England Test team.

South Africa, however, where England were due to tour, made it clear that no England team including D’Oliveira could play in their country; so, on a pretty fragile excuse, he was dropped from the team.

Most British journalists were outraged, and none more so than Michael, a cricket fanatic and good sports reporter, whose articles on the subject I greatly admired. (In the event, a member of the team had to drop out, D’Oliveira was reinstated, and the team were refused permission to enter South Africa, leading to more than two decades of sporting ostracism for that country.)

In 1969, I decided to leave the paper, and was asked to join the David Frost team for his autumn ‘serious’ series. That was at London Weekend Television in a godforsaken concrete edifice on the North Circular. David had made his name as an occasional hard-hitting journalist with the notorious ‘Trial by Television’ of the fraudster Emil Savundra; but he was now combining a talk show in America with two series in Britain – the ‘serious’ one in the autumn, but light entertainment in the spring. That didn’t interest me, and I left that Christmas.

A year or so later I got a call from Michael Parkinson, who invited me to lunch at his favourite Greek restaurant in Charlotte Street. ‘I’ve been given a chat show,’ he said. ‘You’ve been working with Frosty – would you come on board and show us how it works?’ I agreed, thinking Michael could front a really tough, journalistic talk show

They wanted to do it like Frost, with loads of audience participation, and we decided the first show would be about the monarchy. We duly loaded the audience with the Duke of Plaza Toro, the Earl of Ermine, the Count of Monte Cristo, a gang of republicans and so on.

All the while, Parkinson and his producer, Richard Drewett, kept banging on about how we needed to be on the front page of every paper after our first show. So I said that from Fleet Street days I knew Ray Bellisario, the king of the paparazzi, and I’d see if he would come on and might provide a headline.

I drove out to Ray’s house near the airport. I knew about the pictures he’d taken of some recently-married royals on their honeymoon – in the woods and flagrante – and asked how he’d got them (everyone in Fleet Street had seen them but they were obviously never used).

From a cupboard he produced a lens almost as tall as a man. I asked if he would bring it onto the show. He said he would. We talked some more, and then at the end I said ‘Ray, when the Royal family are at Windsor you know which bit of the park they’re going riding in; when they’re at Sandringham you know which bit of the estate they’ll be shooting on; when they’re at Balmoral you know which stretch of river they’re fishing in.’ He nodded. ‘Well,’ I said, ‘that suggests to me that you’ve got someone “fixed” in every royal household.’

He said yes he had. I asked if he would say that on the show. ‘Sure. If he asks me.’

I couldn’t wait to get back to White City. I shot into the office. ‘You want to be on the front of every paper? You’ve got it!’ I told them what had happened.

That first show came and went, and Parkinson never asked the question.

When I asked him why, he said he’d forgotten.

Well, had he? Or was it just because he’d already forsaken journalism for show business? They never tried the audience participation again – Michael couldn’t hack it – and after three or four shows I realised I couldn’t wait for the series to end.

As luck would have it for me, the end of that first Parkinson coincided with the BBC’s James Burke being offered a new kind of series, the one that was to become The Burke Special. He asked me to come over and I couldn’t wait. That series was a phenomenal success – at one point we were getting thirteen million viewers.

Soon afterwards, there was a party at the Hurlingham Club for a retiring head of Science and Features. Paul Fox, then head of BBC One, got me in a corner and asked why I’d left MP for JB.

‘Easy,’ I said. ‘When I first knew Parky he was a bloody good journalist, and I think all the stuff he did with D’Oliveira was great. So I’d thought, and been told, that the show would have a lot of journalism in it. It didn’t. And I was very disappointed.’

‘That’s where you’re wrong,’ said Fox. ‘Parkinson was, is, and always will be Light Entertainment.’ And he was right.