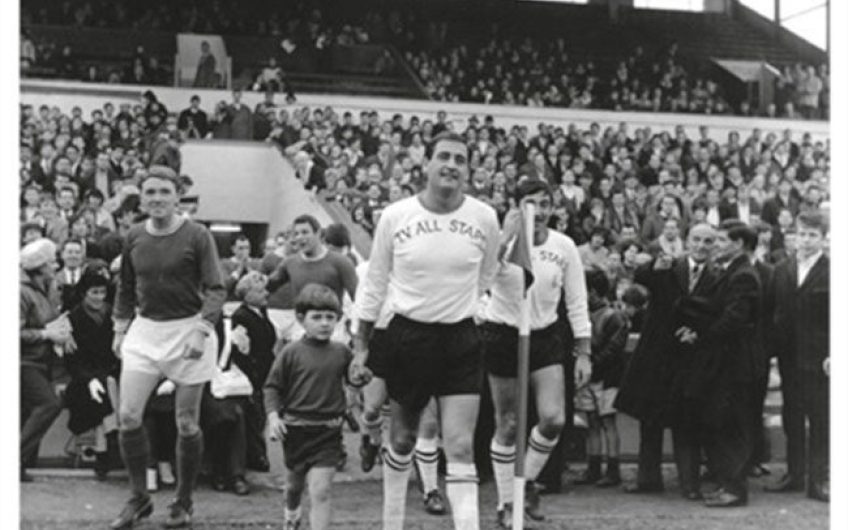 Bernie Winters of the TV All Stars at Ninian Park, in aid of the Aberfan Disaster Fund, 1966
View Full Size
1
of 1

Sean Connery and Billy Wright in a footy match? It's just the world of charity football teams. By John Harding

In the late ’50s, charity football teams were all the rage.

They were started in 1957 by DJ and song-plugger Jimmy Henney and his Show Biz XI. By 1959, there were three serious outfits based in London: the Show Biz team, Mike and Bernie Winters’ TV All Stars and Brad Ashton’s Comedy Writers.

They all played weekly at venues up and down the country against film stars, jockeys, ex-boxers, speedway stars, servicemen and old famous footballers.

They also took on factory and works teams, local village XIs and miners’ teams. They drew crowds of up to 50,000. They raised tens of thousands of pounds for a variety of charities.

Henney’s team was the more serious outfit, including players who had performed semi-professionally – such as Des O’Connor and ‘Skiffle King’ Chas McDevitt. Another of them, Tommy Steele, claimed Alf Ramsey once offered him the chance to train with Ipswich Town reserves.

Then there was Sean Connery, who’d once been offered terms by Matt Busby. The team boasted a trainer, a coach and a masseur, as well as recently retired Billy Wright, a former England captain.

The Comedy Writers XI was a far less ambitious enterprise. ‘When Sean Connery gave away an own goal against us, he cried,’ a bemused Brad Ashton recalled.

In 1958, the Winters brothers, aspiring comedians, were keen to gain exposure via the Show Biz XI’s television slots. Having travelled to a game, expecting to play for Henney’s team, Bernie was asked to step aside for ‘a bigger name’.

The brothers departed, much aggrieved, vowing to form their own team. They soon gathered together stars including Bernard Bresslaw, Ronnie Corbett, Roy Castle and Jess Conrad.

In 1962, the Mike and Bernie Winters’ TV All Stars took on the Showbiz XI at Croydon Airport.

Instead of their usual silly antics, the Winters brothers took the game very seriously.

The violence continued after half-time. Record executive Ziggy Jackson, playing for the Showbiz XI, even broke his leg in a tackle.

Mike Winters said, ‘For Bernie and me, it was one of the most exhilarating moments of our lives – more so even than the thrill of opening for the first time at the London Palladium, at the top of the bill.’

30 OLDIE CLASSICS FOR OUR 30TH BIRTHDAY! (22/30) The Duchess of Argyll was a lovely stepmother-in-law – Lady Colin Campbell