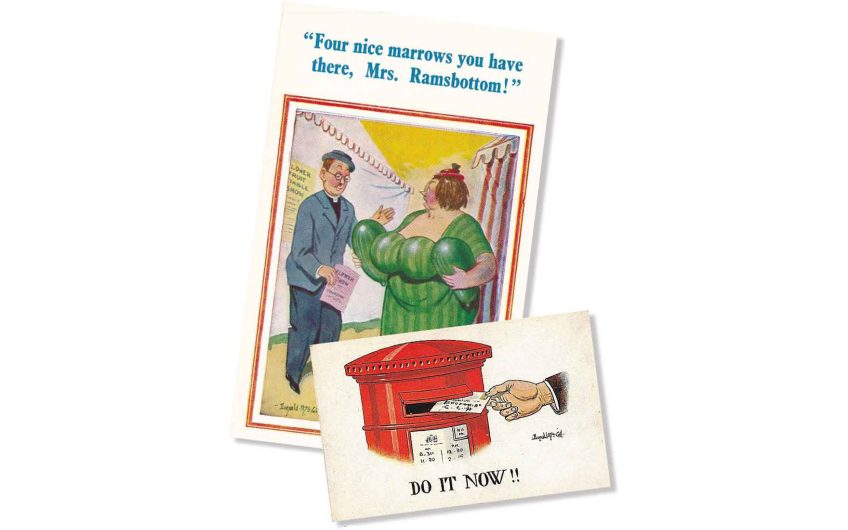 Despite selling in their millions during the early 20th century, postcards have now gone out of fashion. By David Abberton

Searching for postcards of Corfe Castle to send to my old French-exchange friend, I couldn’t find one for love or money. This is quietly tragic.

People don’t send many postcards any more. Last year, only 102,245 postcards were sent from the UK.

In their pomp, they sold in their millions: introduced in 1870, postcards became popular overnight. More than 75 million were sent in 1871 alone. By 1910, the total had swollen to 800 million. With them came a rich slice of British life.

Sent (and censored) from the Western Front in the First World War and from the POW Camps of the Second, they commemorated every event and season, from Cup Finals to coronations. Most particularly, they triumphantly celebrated holidays.

But slowly, the local scenes printed by firms such as Judges Ltd, Valentine and J Salmon Ltd gave way to the ugly, polychrome collages ranged in serried ranks on the seafronts of my youth.

Even Donald McGill was not immune. His 12,000 naughty designs sold more than 200 million copies; the images were seared into our national consciousness. George Orwell considered some witty (Judge: ‘Don’t prevaricate: did you or did you not sleep with this woman?’ Co-respondent: ‘Not a wink, my Lord!’) and all heroic. He said he would be sorry to see them vanish.

But vanish they did: McGill was fined £50 under the Obscene Publications Act and the saucy-postcard market collapsed. Competitors such as Bamforth of Holmfirth (at the end of the 19th century, they made more films than Hollywood) went into decline.

Others tried to fill the void. Holiday camps and hotels printed cards showing their premises. The boom in beauty pageants in the 1970s provided an excuse to send pictures of scantily-clad women. Businesses and shops had postcards showing their excellent modern premises. Even the motorways got in on the act. They were achingly dull: as a survey of the bleakness of postwar Britain, you cannot do better than Martin Parr’s Boring Postcards, which encompass motorway service stations.

Other than cards from exotic locations like the Costa del Sol or those produced for occasions such as royal weddings, postcards were being relegated to wet holidays when mothers would force their children to write to their grandparents.

In 2014, grandparents still received the most postcards. Valentine, the Dundee postcard company, printed their last monochrome card in 1967 and sold out to Hallmark (who no longer sell postcards) in 1980. Bamforth was sold in the same year and J Salmon Ltd closed after 137 years in 2017.

Fewer people make them now; those who do find it harder to make ends meet. Stamps are expensive (85p 1st; 66p 2nd) and the young simply do not send postcards. My son can’t remember sending a single one: what’s the point when you have Instagram?

I mourn this. I like postcards. I have bought several boxes of the Penguin postcards, some too nice to send. I am certainly a deltiophile (from the Greek deltion – ‘small writing tablet’) but few pleasures are as simple and unexpected as a card from a friend.

Please, I beg you, be as resolutely PC (in an epistolatory sense) as possible. If all else fails, there is an app that can send your photograph as a postcard.