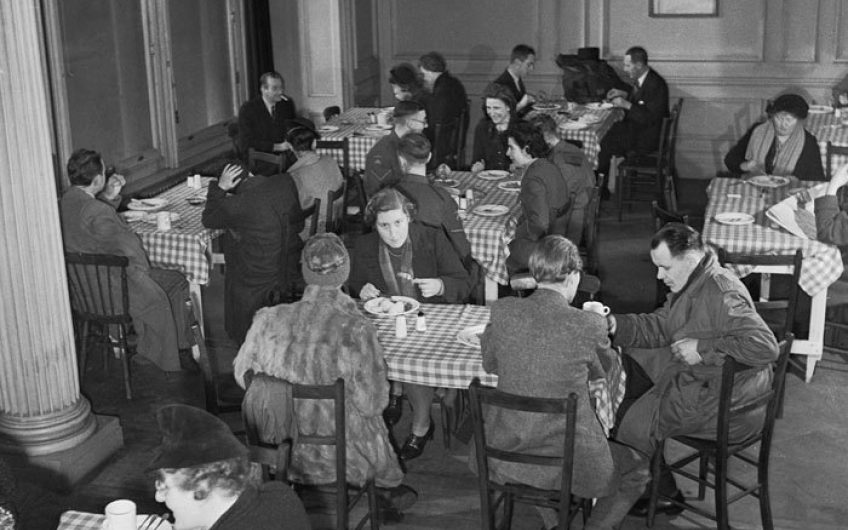 Diners at a British Restaurant in London, circa 1943
View Full Size
1
of 1

During the early part of the War the government decided, in the interests of both health and morale, to empower local authorities to operate communal feeding centres. Originally called Community Kitchens, the name was hastily changed to British Restaurants by Winston Churchill who thought ‘Community Kitchens’ smacked of communism – and he was having none of that.

The meals were not restricted to those residing within the local authority, but were available to all, and when dining in the centres one could not help but feel a great sense of community.

Operating under strict controls imposed by the Ministry of Food, they had to be non profit-making, but they were expected to break even and not be a charge on the ratepayers. To assist in achieving this financial balance, many of the restaurants were staffed almost entirely by volunteers, the stalwart ladies of the WVS doing the lion’s share.

They were usually housed in municipal premises, but in some regions temporary buildings were hastily erected. Decor was extremely basic, but after all, there was a war on and many of one’s fellow citizens were eating in far less favourable conditions. Trestle tables covered in what was loosely termed ‘American cloth’ (plastic-coated cotton cloth which only required ‘wiping down’) were fairly standard as this saved on laundry costs. Cutlery and crockery were often of a mixed variety, in some cases having being donated by masonic lodges, cricket clubs, friendly societies, chapels, etc. In the rare cases where floor coverings had been installed, drab-coloured battleship-quality linoleum was the order of the day.

The type of food served could best be described as good, plain honest grub – extremely nourishing, with no frills and quite similar to the fare dished out in the past at the innkeepers’ ‘ordinaries’. Inevitably some of the regular dishes became universally unpopular, none more so than ‘skilly soup’ (a kind of gruel), a comestible that entered the lexicon of music hall comedians. A typical luncheon consisted of brown Windsor soup, boiled cod, mashed potatoes and cabbage – followed by Victoria sponge and custard. The maximum controlled price for such a meal was ninepence, with a mug of tea or coffee costing extra. This was good value, though it should be borne in mind that in those austere days, and until 1949, the maximum controlled price for any meal in a hotel or restaurant was five shillings.

One queued up military style with plate in hand, to be served by matronly ladies who doled out food from behind a counter full of steaming dishes. Smoking was permitted in all areas, and it was not unknown for the odd length of fag-ash to drop into the dishes whilst food was being served. (Despite that, it is generally acknowledged we were a much healthier nation in those days.)

The death knell was sounded for those worthy undertakings with the passing of the 1947 Civic Restaurants Act which required the closure of civic catering facilities when losses had been incurred over three consecutive years. Many continued operating until the early Sixties, by which time expensive bureaucracy had taken hold at the town halls, and the ever increasing overheads loaded onto British Restaurants made it uneconomic for them to continue.

Readers over a certain age are sure to have fond memories of consuming reasonably priced meals in British Restaurants. Although the operation was basic in every respect, in those days, eating was something you did to stop you from dying. How times have changed!

The shame of the scammed - Bettine Mackenzie