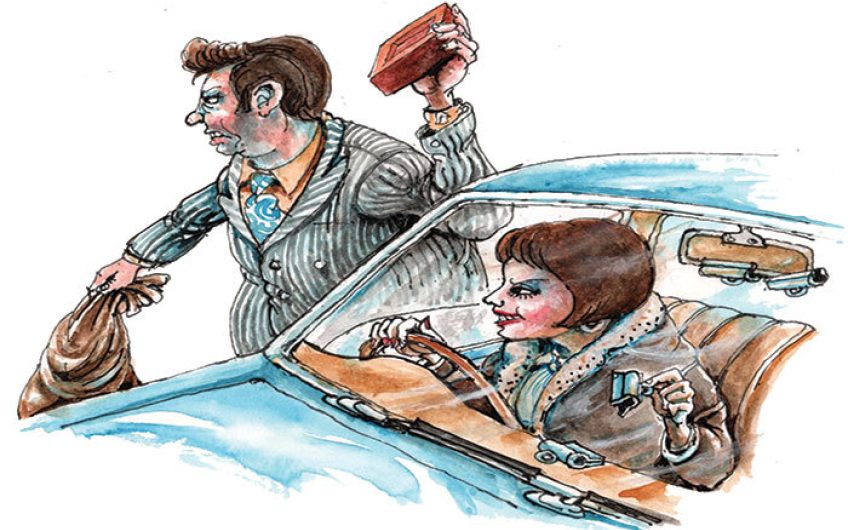 Back in the Thirties, Lilian Goldstein was, in the words of the detective Fred ‘Nutty’ Sharpe, ‘a very spunky girl, trusted by these very dangerous criminals as one who would submit to anything rather than give away the secrets of the gang’. He remembered spotting her in a car ‘sitting at the wheel with a man’s collar turned up around her close-fitting little black hat’. This was probably an advantage as Lilian, a nice middle-class girl from Wembley Park in north London, was the getaway driver for Britain’s most notorious smash-and-grab robber of the time, a chap called ‘Ruby’ Sparks: he got his nickname because he had stolen rubies from a maharaja in the West End and given them away to pals after an incompetent receiver told him they were fakes.

Lilian (whose own nickname was ‘the Bobbed-Haired Bandit’) was a resourceful young woman who could not only step on the gas for a getaway but also provide Sparks with bulldog clips to close his bloody wounds – all those smashed windows – until she had time to stitch them up (she had been a dressmaker before getting behind the wheel). ‘Her trouble was that she ought to have been a boy,’ said ‘Nutty’ in his memoirs.

When Sparks escaped from Dartmoor, Lilian hid him in her home and was subsequently jailed for six months for harbouring a criminal – a relatively short sentence because of her ‘womanly’ attachment to Sparks: ‘I can understand the human element in this case,’ said the judge. ‘He was an escaped convict to the rest of the world but that is not how she viewed him.’

Lilian and Sparks parted after she told him that ‘I’ve had enough of this bandit queen lark.’ Sparks went straight and ran the Penguin Club in Regent Street for a while after the war. But what happened to Lilian? Any Oldie readers know?

Gypsy Hill was the wife of Billy Hill, the ‘Boss of the Underworld’ in Fifties London. Hill himself came from underworld matriarchal aristocracy: his sister Maggie was only nine when she became the look-out for a gang of female shoplifters called the Forty Elephants, whose main targets were the more expensive West End stores. Maggie eventually became known as ‘Baby Face, Queen of the Forty Elephants’ (everyone needs a nickname in this game). The detective John Capstick described her as ‘utterly fearless; she knew every trick in the book and could put away three fur coats and a bolt of cloth in the time it took any of her team-mates to snitch a pair of camiknickers.’

Gypsy was born Phyllis Riley in Ilford in 1925, with jet black hair and piercing blue eyes. Her mother’s best friend, a Romany, decided that Phyllis must be a gypsy, and the nickname stuck. She worked as an usherette at the Super Cinema in Ilford and, as a sixteen-year-old in 1942, went to the Palais, all dressed up and using beetroot as rouge, to dance to the orchestras of Billy Cotton and Joe Loss. At the age of 22, upset that a couple had laughed at her mother in the local Coach and Horses pub, she got one of those old passenger grips from a tube train and belted them with it.

She found postwar ‘up town’ London electrifying. In the Cabinet Club, she caught the attention of the owner, Billy Hill, by then an established gangster, and was given a job at his spieler. One day she was involved in a fight in the street in which she attacked – with a high-heeled shoe – three women who had been mocking a deaf mute. Hill witnessed this, was mightily impressed and that night they became lovers.

In 1952, Gypsy was a getaway driver in the robbery of £287,000 from a Post Office van in Eastcastle Street in the West End. The robbery was as famous – if not more so – as the Great Train Robbery a decade later, and pops up in the film >span class="s1">.

In 1955, the Hills tried to move to Australia which, by then, was less keen on providing a home for Britain’s criminals. They had reached New Zealand via the Pacific when it became clear that Australia would not admit them. ‘It makes you sick when you think we have come this far – and for this to happen,’ a forthright Gypsy told the Daily Express. ‘If only we had known sooner, we could have got off in Tahiti.’

In 1957, Gypsy was at the Miramar Club in Paddington when she overheard a couple at the next table saying ‘look at her in her rabbit’, a disparaging reference to Gyp’s £1,500 mink coat. The couple then brushed past her table and, according to the account in the book Billy Hill, Gyp and Me written by her son Justin, she leapt at them. The man tried to punch her, and she responded by whacking him in the face with a table lamp, advising him as she did so, ‘Don’t start something you can’t finish.’ Billy Hill ‘got busy’ with the witnesses and when Gyp appeared in court on GBH charges the magistrate said that the evidence was not strong enough to send the case to trial.

Gyp was a chum of the actress Diana Dors, who arranged for her to go to elocution lessons, and for a while she ran Churchill’s, a nightclub in Tangier. Its opening was attended by the Kray twins and the actor, Kenneth Williams. Strange days.

Another stylish woman who made big waves in the underworld, this time in the Sixties, was Rusty Humphreys. She had trained as a dancer and her mum had hoped she would be a child star, but she became Rusty Gaynor, the best-known stripper of the era (she took the name from the film star Mitzi). She met up with Jimmy Humphreys, a Soho strip club owner and pornographer, and, since the vice squad of the time was deeply corrupt, she found herself having to entertain the wives of bent coppers who liked to be taken to the swankiest restaurants, something she found deeply boring. Looking through my ancient cuttings files, I see that in 1999 a film about Rusty was just about to go into production. Anyone know what happened to that?

While Lilian Goldstein tired of the bandit queen lark, Marilyn Wisbey has been happy to be known as a twenty-first century gangster’s moll, the title of her 2001 autobiography. Her dad was Tommy Wisbey, one of the great train robbers, and her boyfriend for many years was ‘Mad’ Frankie Fraser, a notorious ‘enforcer’. Her book ends on a cautionary note advising criminally inclined chaps not to get themselves molls: ‘If you’re a young man who is thinking of taking the road to crime, please do not have children or get married... At the end of the day it’s not just you that suffers. Everyone does.’

Would Bonnie have ever said that to Clyde?