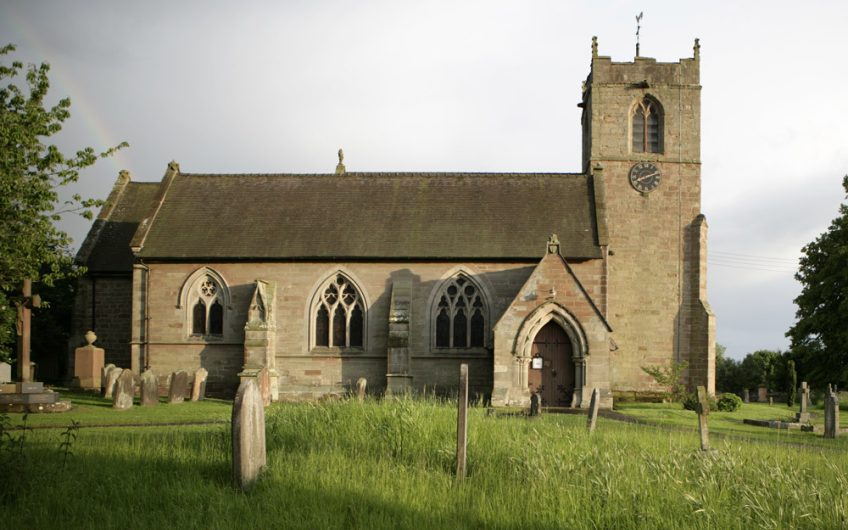 The National Churches Trust has launched a new study of the future of our greatest buildings. Harry Mount has contributed to it

A friend of mine, who works in the Foreign Office, once told me how she was longing for her next post in France after a spell in America. She had missed what she called 'les vieilles pierres' – the old stones.

When lockdown ended, I was hungry for old stones and, inparticular, for churches. Stuck in London for the pandemic, I'd been deprived of them foran agonisingly long time.

The first I went to was St Mary's, Warren, Pembrokeshire – a 14th-century church with an enchanting, late-medieval spire you can see from miles in every direction.

I felt a Ready-Brek glow just gazing at the old stones of the church from the outside, with nothing beyond it except empty fields, the Castlemartin military range and the sea beyond. Inside, the glow intensified at that good old feeling you get on entering a church: of silence and a slightly musty hit of ancient
dust and new furniture polish, mixed with reverence.

It's impossible to talk about these things without thinking about Philip Larkin's "Church Going". The poem was published in 1955 but, even then, he was asking the question the Church of England is asking that much more desperately today.

'...wondering too
When churches fall completely out of use
What we shall turn them into, if we shall keep
A few cathedrals chronically on show,
Their parchment, plate, and pyx in locked cases,
And let the rest rent-free to rain and sheep.
Shall we avoid them as unlucky places?'

Larkin ended that great poem on a semi-optimistic note:

'Someone will forever be surprising
A hunger in himself to be more serious,
And gravitating with it to this ground,
Which, he once heard, was proper to grow wise in,
If only that so many dead lie round.'

I'm sure he's right. We won't see the bulldozers move in on St Mary's, Warren, or any other ancient church – partly because of that respect for the dead and the feeling of seriousness Larkin refers to; partly because of planning rules.

What will happen to the buildings?

But what will happen to the buildings? Several other Pembrokeshire churches near St Mary's have already closed in recent years. Their structure is kept in good nick. They remain consecrated for the odd service. But it's hard to see them opening up for regular services with big congregations ever again.

What to do with the churches?

The Archbishop of Canterbury and the higher echelons of the Church of England did not cover themselves with glory during the pandemic.

They rushed to close the church doors just when calm, beautiful, ancient places were most required; just when huge, empty buildings were the safest place for a few congregants – even more so for the lone church visitor like I was at St Mary's, Warren.

Please, God, we won't face such bleak days again. And, if and when the pandemic disappears, or remains at a low, manageable level, those two qualities of most of our churches – old stones and a quiet place of strong, religious feeling – will remain vanishingly rare, particularly in our city centres,
ravaged by modern development.

Those qualities are even more powerful in the digital age, when so many of us – including me – spend so much of our days staring at an unlovely, modern, glass screen. But how do you square the circle? How do you retain the ancientness and the reverence, and make the buildings usefulat the same time? I'm afraid there has to be a compromise.

The writer Simon Jenkins has put it well in the past. Empty churches – unless they are unusually well-endowed – will have to bite the bullet and lend part of their fabric to commercial purposes. Plenty of them do this already, of course – renting out the church or the church hall for everything from business AGMs
to pop concerts.

That's easy enough in a city; more difficult in rural Britain. I'm afraid that the more remote a building, the greater the compromise will inevitably be. In extremis – and only if necessary to pay for the upkeep of a church – the church nave could be converted to residential use, with the choir (if there is one) and chancel still fenced off for religious observance, with access guaranteed to worshippers.

Any conversion work must be reversible in the unlikely event of a return to growing congregations. If the rural migration from cities that happened during lockdownis maintained, church space will be even more valuable – as remote offices and cafés.

These new uses needn't come at the sacrifice of the church's original, crucial, spiritual purpose. I have often sat in the café at St Mary Aldermary, Christopher Wren's marvellous Gothic church in the City of London – and have felt a deeply spiritual feeling.

The ability to sit and stare

Many times, I've found it easier to pray, staring at Wren's sublime fan vaults, double macchiato in hand, than I have when kneeling in prayer elsewhere. The ability to sit and stare while sitting at a café table, doing not very much, produces the right sort of mood for thoughtful contemplation.

Of course, lots of uses must be forbidden: betting shops and sex shops spring to mind as unacceptable. But I see no reason why bars shouldn't be allowed in the unconsecrated parts of churches – and I stress that this is only in those churches that are facing closure or bankruptcy if they don't embrace commercialalternatives.

So many churches are in the last chance saloon – better that they should become holy altars with saloons attached than disappear for ever.