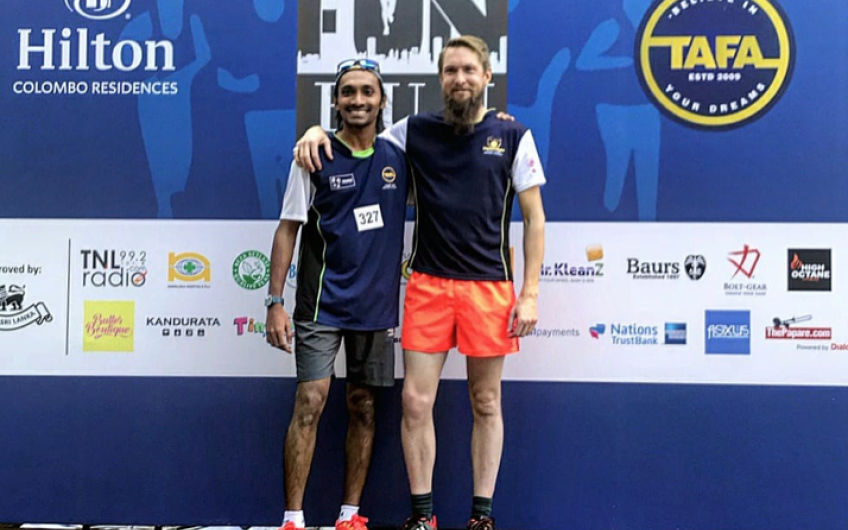 I hadn’t been in Sri Lanka 24 hours before the phone rang. We were sitting at the Cricket Club in Colombo, watching South Africa’s openers collapse against the Indians, when my wife picked up. It was Thaabit Ahmed, Colombo football coach, former not-quite pupil of mine and subsequently colleague of Fiona. He wanted to know if she would like to join the Hilton 4k Fun Run on Sunday morning. It cost a thousand rupees (five quid) – all proceeds to the Lady Ridgeway children’s hospital – starting at the Hilton Colombo Residences.

Thaabit is a relentlessly enthusiastic young man, who eight years ago opened the Thaabit Ahmed Football Academy (TAFA) at the age of 19, and now has connections with Man City, Valencia and Dortmund, and employs a team of Brit and local trainee coaches. One of those annoying dreamers who by hard work and persistence actually do get things done, he is the sort of person you quite often find yourself saying yes to.

My wife said no. And then she looked at me and said, “…but Adam might?”

I am not what you would call a morning person. And I had not exactly over-trained for this (think Nigel Havers’s character in Chariots of Fire). Add two long flights, heavy baggage, tiny baby, several curries, rather more beers, a couple of arracks, a short night’s sleep, and a 5.30am cab driver who – inevitably – couldn’t find me… All I’m saying is, the best thing about doing an athletic event at the Hilton is you can order cappuccinos from room service.

The Fun Run was supposed to happen in December (curses!), but it was called off after weeks of rain – only for the sun to come out blazing on the appointed morning. For this rescheduled fixture, the crowds were smaller than had first signed up.

The ‘revised’ start time was 7am, perhaps for 7.30am. The local pros were ‘warming up’, jogging back and forth along the closed-off lane. 'The fools,' I thought. 'They must’ve run a kilometre or two already!” I chatted to Bilal Hassen, Sri Lanka’s former rugby number eight, now TAFA’s fitness guru. The TAFA expats shanghaied a passing Dutchman in his Lycra.

Thaabit was understandably keen that his team put in a decent showing (we were wearing his stash), so he laid on bananas, cereal bars and papaya juice to keep us going. NB: If you don’t normally eat before 11am – let alone before a race – ‘going’ is indeed the mot juste.

And then we were off. There were, essentially, four categories of racer: the local pro runners; fun runners; the older/overt non-competitors; and kids, doing a 2k version.

The pros dashed off beside the kids, not precisely per plan. The rest of us politely waited, and then trotted out – all trying to make it look like we weren’t really trying, except the Dutch bloke, obviously – accompanied by a considerable police presence and a double-decker red bus full of travelling supporters.

We ran up Union Place, across the De Mel Park six-way junction, past the Defence Services College, Slave Island police station, and the air force cricket ground (you wouldn’t believe the number of cricket grounds in this town). We turned right at Lake House, and went along DR Wijewardena Mawatha, the south side of Fort Railway terminus, before U-turning. So back to Lake House, past the Rowing Club  and the Cinnamon Lakeside Hotel where my cousins-in-law took Fiona and me to celebrate our engagement, and then down the other side of the Defence College, past the turning for the Colombo Malay Cricket Club, and back to Union Place, to cross the ‘FINESH’ line.

Fond recollections are one way to keep your mind off what your legs are doing. But it’s 25°C already at this time of day, and you're dodging buses, tuk tuks and, on one occasion, a fully tooled-up JCB with bucket waving. Then there’s the Beira Lake, which at this and any other hour smells revolting.

Still. For all that, my pace did not appear to change one jot – it never does – 4.2k (it turned out) in maybe 19 minutes: about 8mph. Hardly Roger Bannister, but it brought me in among the first few non-pros.

‘Did you win?’ Fiona texted lovingly, from the comfort of her bed. I would have laughed, except my lungs were hurting.

'There are snacks for all competitors,' the MC told us. 'So don’t run away!' I grimaced, wearily. (Also NB: I do not recommend vanilla milk for afters.) And then we had the podium business: the certificates, the umbrellas, the photos, and the thanking of two dozen sponsors.

Breakfast after, courtesy of the Hilton’s GM, in a room off the bar where friends and I have spent increasingly cheerful afternoons at happy hour – now, alas, a rather ordered restaurant. I don’t know what a buffet breakfast costs there; but what with the bacon and eggs, fruit, cheese, coffee and some sushi, I certainly recouped my Rs1,000!

On the bus back down to Mount Lavinia, a nice old gent called Sena, with a battered gardening hat and flourishing moustaches, asked if I had been out ‘jogging’. I felt it was legitimate to say I had. He sported an immaculate pair of rather splendid knock-off Adidas, in retro colours. I took a picture of our legs – and, more importantly, our matching footwear.