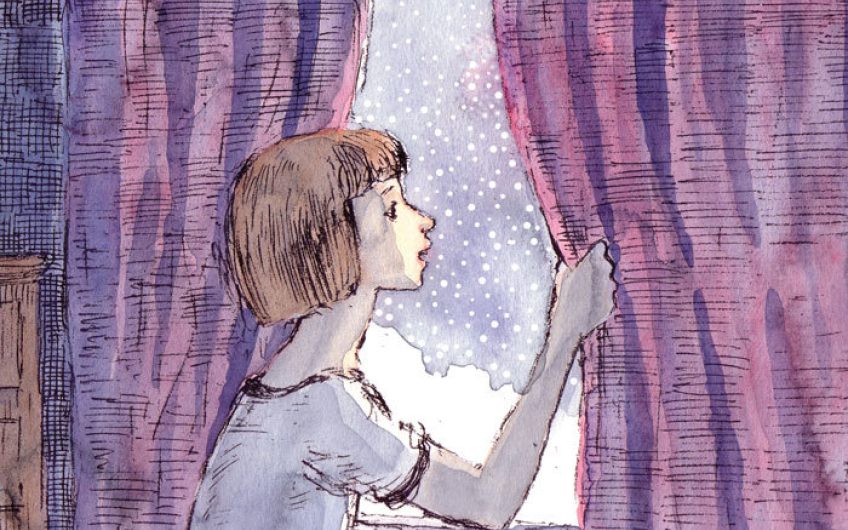 Waking to a white world is a childhood memory that doesn’t fade. That initial gasp of delight when the curtains are drawn used to be the start of hectic fun.

We would make a huge snowman on the top lawn. Adults smiled understandingly. Once they had loved it too. But snow made work. It was unkind to the elderly and wore them out. Neighbours’ children used to join us. Our snowman must be huge, he had to wear a funny hat with a carrot for a nose and stones for eyes. More stones must button his front. A walking-stick made the finishing touch.

The sled must be got from the shed. The nearby Merrow Downs were perfect for tobogganing. As the youngest girl, I was light and easily thrown onto the snow. ‘Hold on Ursula.’ A bumping lurch and I was off, lying on my stomach. The sled ran over my hand and I began to cry. My hand hurt; blood was seeping through my woolly glove. We had to go home. I had spoiled the fun. I don’t remember tobogganing again.

One Christmas when my parents were abroad, my brother and I were sent to Bexhill to a holiday home. It was a dreadful place. Other children were staying there. On Christmas Day the owners gave us a huge dish of sweets of every kind. We ate them that afternoon. Then we played hide-and-seek all over the unheated house. I felt much happier when I caught a bad cold and could lie in bed and watch the snow outside.

When war began I joined the WRVS. I was eighteen. At first I was posted to the south coast but ended up in Largs, Scotland, where the weather was mostly too cold for snow. Coal was rationed. We took turns to collect it but any heat from the funnel stove in the Nissen hut was barely noticeable.

There were five others in the hut. We sang Vera Lynn songs to the wind-up gramophone. ‘When They Sound the Last “All Clear”’ was a haunting one, but few bombs fell; the war was almost over. The only time I felt warm in Scotland was in the bath. The ablutions hut was next to ours. By getting up before six the water was hot – but not for long. I got ’flu and managed to get sent to the Sick Bay. Being ill paid off. Beautiful though Scotland is, I have never wanted to go back.

The snow in beloved Ireland was gentle in comparison. I married and lived in Dublin where snow quickly melted into slush. Before a dance my husband had to carry me to the waiting car to keep my long, pale skirt out of the wet.

Fuel in 1947 was in short supply. Gas for cooking was only available for three hours a day, otherwise there was just a ‘glimmer’ when a kettle would take three hours to boil. We burned cardboard boxes and newspaper in the grate to make a brief blaze. I didn’t learn to cook properly until after the children were born and we lived in London. My elderly neighbour gave me advice.

Heavy London snowfalls were – and are – rare. My children once made a pitiful snowman from scrapings in the back yard. We put a lollipop in its mouth and toffees for eyes. It was called Auntie Picasso.

I like the Irish belief that Christmas and Whitsun can be especially creative times for artists of every discipline. Energy levels are high. Carpe Diem and may Heaven bless the work.

One Christmas Eve when the children were older and I was alone, I went to the Tate Gallery. When I got there I found it was closed. The darkened windows and locked gate made me sad. I walked along Atterbury Street and saw one lighted window in the building. I peered through the railings to watch the staff having their party. Smiling faces, drinks in hand, mistletoe hanging; a man wore a Santa Claus hat. I felt cheered, and with a lifted heart, took the bus home. Icy weather was forecast.

Sleety snow was falling the next day. After some seasonal phone calls, I got to my typewriter – the one I use now. Lunch was pork chops and Brussels sprouts with biscuits and tea to follow. Then back to work.

I cursed when the doorbell rang. I wanted to shout ‘No room at this inn’ through the letterbox. The caller was the lonely carpet-fitter who had laid our floor covering earlier that year. He had liked meeting my family and had come hoping for festive food, fun and a welcome. Instead of his working clothes he wore a new sheepskin jacket and gloves. Today he had shaved and washed his hair. Concealing my lack of enthusiasm, I gave him instant coffee and dull biscuits – the chocolate ones were already eaten. I had no alcohol. He looked glum as he sipped and gazed out at the falling snow.

I was no inn keeper, only an unpublished writer trying to use the time as well as I could.

Now I am in a care home run by nuns where Christmas is massively celebrated with services, carols, rich food, presents and fun. With luck I will sneak to my room and write a bit. Snow would be a blessing.