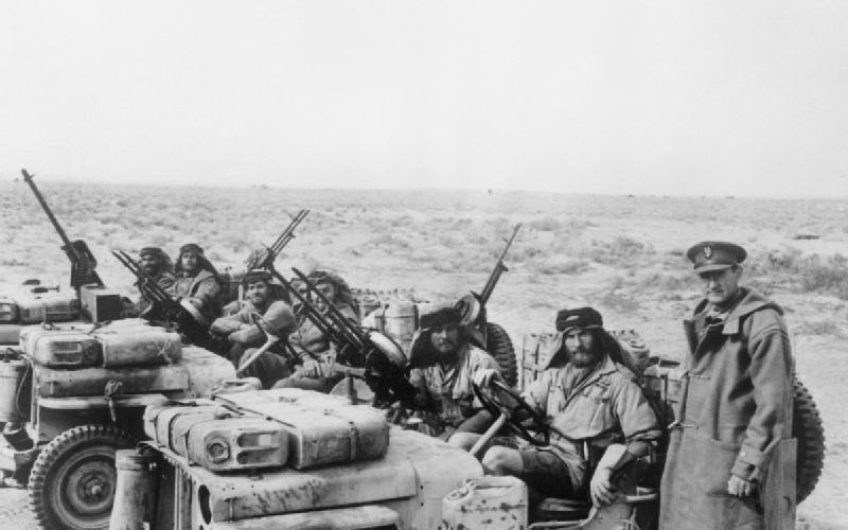 The coolness of a lone SAS trooper in the unfolding drama of the Al-Shabaab terrorist attack on the Riverside14 complex in Nairobi must be one of the most striking images in the regiment’s history. The man had been shopping nearby when the attack on the hotel and office compound unfolded.

He quickly went home to grab his rifle and pistol, body armour and khaki balaclava, before entering the fray. With astonishing presence of mind, he directed the rescue of the frightened clientele in the shops and restaurants, and organised groups of Kenyan security forces in pursuing the attackers. The Kenyans evidently knew him and closely followed his command.

Who was this pop-up hero, acting so decisively on the spur of the moment?

In the hours and days following, he has been described variously as ‘an off-duty SAS trooper’, and even ‘a US Navy Seal’ (because he was carrying the pirate patch he had been given from his service with the Seals). One online report suggested he would be charged for carrying a weapon on civilian duty.

The SAS, however, has brilliantly lived up to its reputation for omertá . The name has not been blabbed , and, no, he hasn’t been bollocked by the management. In fact, Defence Secretary Gavin Williamson phoned him that evening with thanks and congratulations. The man, understood to be a senior NCO on a long-term engagement to Kenya with the SAS, is in line for the George Cross, the highest civilian award for an act bravery. Our man is known to have served in Afghanistan and Iraq.

He was on a long-term mission to train Kenyan security and special forces in urban and rural counter-terrorism, specifically against the Somalian Islamist al-Shabaab. There are a number of such missions to selected special forces in hot spots like Somalia and Nigeria, and with the Kurds battling ISIS in Syria. The complexity and variety of these engagements, including exchanges with allies like the American Seals and Delta Force, the Australian and New Zealand SAS, means that the UK’s Special Forces community of about 3,000 is working at full stretch.

That community includes the Special Boat Service, special signals units, the Special Forces Support Regiment based on 1st Battalion the Parachute Regiment, and niche technical, training and logistical elements, and a potent air section with helicopters and fixed wing aircraft.

At the heart is 22 SAS regiment and its affiliated territorial reserve regiment, originally dreamt up by David Stirling (pictured with the SAS in north Africa in 1943) and others in the desert War of 1942. The main force is made of four Sabre Squadrons of around 80 each – but only rarely will they all deploy and fight as an entire formation. Exceptionally, they did so in the Falklands in 1982, and various stages of the Afghanistan campaign.

The key sub-unit here is the troop, of between four and eight individuals, plus specialist signallers and the like. The troop practises a rough and ready form of military democracy, with decisions, intelligence up for limited and practical discussion before execution. 'Every man must, and does know his mission' are as much the watchwords as the 'Who dares, wins' motto. Christian names are used, and the commander inevitably is called ‘boss.’

It is this approach to decision and action, as much as the mental as well as physical courage of the SAS and its affiliates, now including women, that earns it such respect from friends and across the board, and from real and potential foes, too.

Much of the regiment is recruited by the gruelling ‘selection’ training curriculum and exercises from elites within the British Army. The Parachute Regiment always has a large representation throughout the ranks. The Royal Marines run the SBS and, with the RAF Regiment, contribute to the Support Regiment.

The anonymous SAS hero in Nairobi was in many ways emulating the story of Dominic Troulan, a former officer and soldier in the Parachute Regiment and Royal Marine, at the battle with Al-Shabaab terrorist at the Westgate complex in the same city in 2013, in which 67 people died. By then retired, Troulan armed only with his pistol entered the battle zone more than a dozen times, rescuing hundreds of terrified shoppers and tourists.

Though exhausted after three days of battle, he had the wit to supervise screening of the victims to ensure the terrorists were not trying to hiding among them to make their escape. It is believed that our SAS hero this month did exactly the same.

Both men would say they were ‘fighting for intelligence’ on the ground – at which the specialist services, including the Patrols and Pathfinder platoons of the Paras and Marines, excel. For instance, the SAS unmasked the infiltration of al Qa'eda into the Bosnian conflict, especially in the Muslim mountain town of Maglaij, years before this was reported by media.

Troulan and the SAS hero acted on their own initiative and with the ethos of their parent units at their best. What they did, how and why they planned and acted in the way they did, will be part of counter-insurgency and anti-terrorism training for years to come.