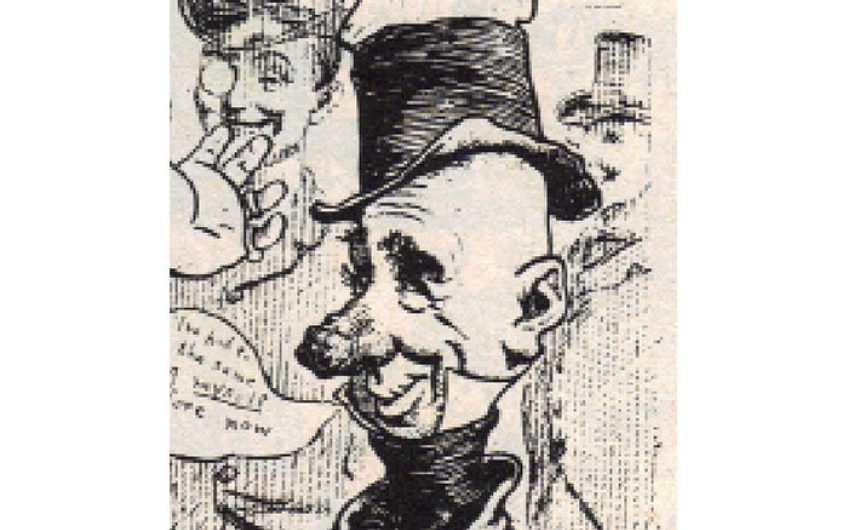 Although almost forgotten today, a scruffy, vulgar, gin-swilling loafer dominated popular culture in Victorian and Edwardian Britain, giving rise to a merchandising phenomenon and inspiring the screen personae of Charlie Chaplin and, especially, W C Fields. He was Ally Sloper, the first superstar of comics.

Named for a slang term of the period which described the sort of insolvent tenant who would slope off down the alley to avoid the rent collector, Alexander ‘Ally’ Sloper was created by writer/artist Charles Henry Ross for Judy, a rival magazine to Punch. Beginning in August 1867, the adventures of Ally and his friend Ikey Mo (comics’ first racial stereotype) were published weekly. They were crude, broad and hard-hitting, appealing to the newly emergent literate working class created by the 1870 Education Act.

Balding, bulbous-nosed, spindly-legged and wearing a battered stovepipe hat, Ally was an eternal optimist whose imagination was matched only by his incompetence. He would cook up various dubious schemes for making easy money which inevitably fell through, leaving him no wiser. A pro-royalty and pro-Empire working-class patriot, he was comfortably acceptable to his publishers and advertisers, as well as his target readership. This was perhaps the secret of his success; he was mildly subversive but not a danger to the establishment.

Ross sold the character to publisher and entrepreneur Gilbert Dalziel, who felt that the pseudo-Micawber could sustain his own magazine and in 1884 launched Ally Sloper’s Half-Holiday, which ran for an impressive 39 years, billed as ‘Being a Selection, Side-Splitting, Sentimental and Serious, for the Benefit of Old Boys, Young Boys, Odd Boys Generally, and Even Girls.’ The paper was as crude as its star. Tasteful layout and design were not a consideration. The idea seemed to be to fill every inch of space with cartoons, strips, jokes and illustrations so that the reader could feel he was getting his pennyworth.

The commercially aware Dalziel, wishing to increase the visual appeal of his star character, jettisoned the crude but vigorous artistic style of Ross and his wife Marie Duval in favour of the polished penmanship of American-born W G Baxter, who set about developing Ally into a classic charming grotesque. This superb cartoonist’s tenure on the strip was a short one and, ironically, he would die in the sort of drunken poverty which was the strip’s milieu. He was succeeded by W Fletcher Thomas, who remained on the feature until the Twenties.

In 1896 it was claimed by one newspaper that Ally was the most famous fictional character in the country. True or not, his fame was certainly exploited in that most modern of ways – by canny marketing and promoting the character as what we would think of today as a ‘brand’. To encourage reader participation a fan club was created whose members received ‘a splendidly designed diploma’ and other promotional items. Various spin-offs, both official and bootleg, included mugs, games, toys, paperweights, puppets, cast-iron doorstops in the form of Ally and his wife, and even a sauce called ‘Ally Sloper’s Favourite Relish’.

Ally crossed over into other areas of entertainment. He was portrayed in music hall, theatre and magic lantern shows and was licensed out for use in advertising campaigns. He even featured in a number of very early motion pictures.

The strip ran for 56 years. Perhaps Ally’s eventual declining popularity could be attributed to the character’s target audience being predominantly adult at a time when comics were increasingly being perceived as kiddie fare. British adult comics have been a tiny niche market ever since.

The rogue enjoyed a brief revival in the 1920s, and again in 1976, courtesy of British comics historian and writer Denis Gifford, who published four issues of an adult-oriented comics magazine featuring both reprints and new material. Critical reaction was favourable but sales were sluggish, and the Dickensian reprobate sloped off once more into the alleys of obscurity.