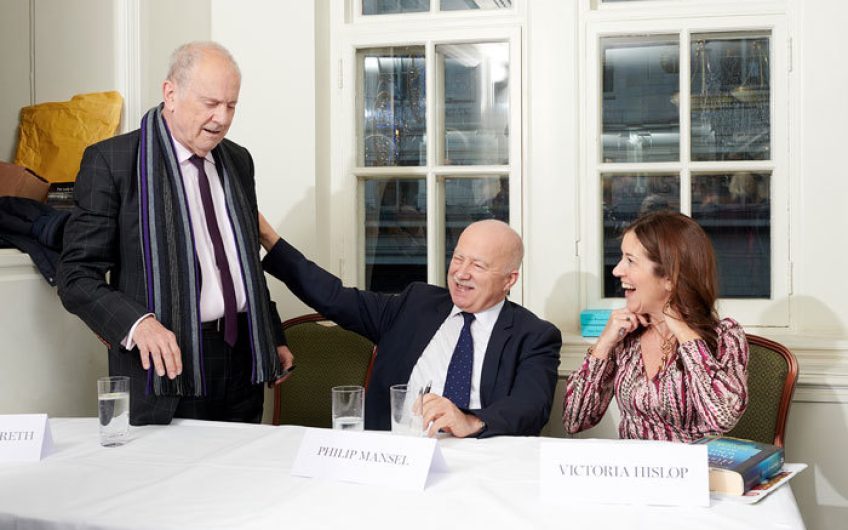 Compere Barry Cryer was in fine form, performing the parrot joke with his usual elan.

Philip Mansel spoke first. His book, King of the World: Te Life of Louis XIV, charts the story of one of the most powerful men who ever lived.

Mansel noted the Sun King’s proselytization of his catholic faith. His ruthless suppression of the Huguenots is well known, but what you might not expect was his determined attempts to bring Roman Catholicism to the Kingdom of Siam. He even sent a letter to the King of Siam explaining his conviction that Roman Catholicism was the greatest religion in the world.

Keen to stress Louis’s continuing legacy, Mansel explained how his Bourbon dynasty still continues to rule. Not in republican France, but in Luxembourg and Spain.

Victoria Hislop then presented her new book, the story of Greece’s tumultuous twentieth century told through the fictional life of someone who lived through it.

Those Who Are Loved recounts fascinating events in Greek history – the refugee crisis in 1926, the Second World War, the junta that followed and Greece’s civil war– but it is also about sharing a story.

Themis, the protagonist, who has lived through all these stories, aware that she has little material wealth to pass on to her family, decides to share her story with two of her grandchildren. The heart of the book is about dialogue. Between families, yes. But particularly between young and old.

Finally, Gyles Brandreth spoke about his new book, Dancing by the Light of the Moon, a collection of best-loved poems.

Gyles is one of the few people actually enjoying this election cycle. He is canvassing on behalf of his daughter, Aphra, who is standing as the Conservative candidate for Kingston & Surbiton. He sang the praises of his daughter on the doorstep, citing her intelligence and wit.

‘Are you sure she’s your daughter?’ said one constituent.

Having loved poetry since he was a child, Gyles was always convinced that memorising the stuff helped the mind. Two years ago, he made a radio programme with the BBC to test the thesis. He was right.

But for Gyles it is all about family. That’s why he wrote the book, to stay in touch with his three children and his seven grandchildren. That and the money…

Our thanks again to our sponsors, Noble Caledonia, and Simpson’s for yet another fabulous festive feast.