Why learn Latin? By NM Gwynne 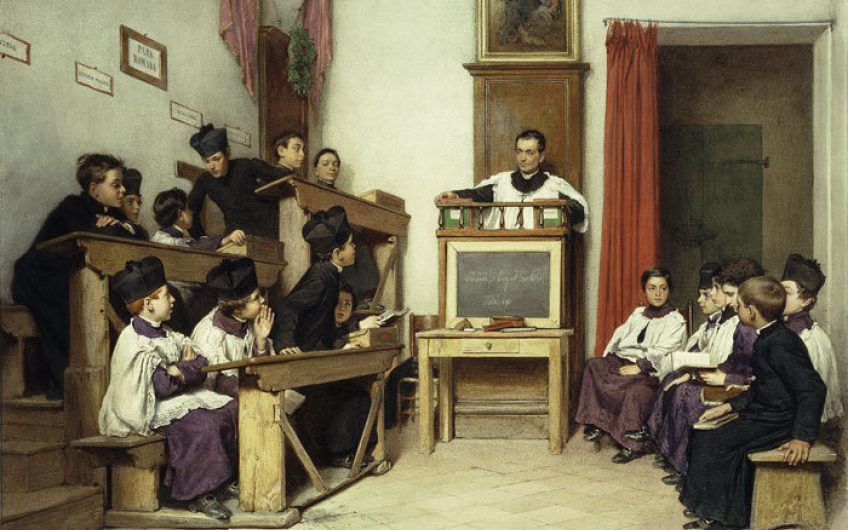 Mary Beard has said carpentry and engineering are just as important subjects as Latin. Dead language it might be, but Latin is still crucial for developing minds, says N M Gwynne

‘Latin is a language/As dead as dead can be./It killed the ancient Romans/And now it’s killing me.’ So I remember us chanting outside the classroom at the age of seven or eight, more than sixty years ago. And in those days, Latin had plenty of time in which to do that fateful job. Up until the age of about fifteen, we spent much more time on that ‘dead’ language than on any of the other academic subjects.

Why? Why was Latin learnt at all, let alone given such high priority?

Here are the most usual answers. It improves and enriches our command of English, because it is the best way of learning English grammar; more than half of the English vocabulary is derived from Latin; and, for instance, it shows us why the plurals of memorandum and appendix are memoranda and appendices respectively and why the symbols for gold and silver are ‘au’ and ‘ag’ respectively. Knowledge of Latin makes it easier to learn French, Italian, Spanish, Portuguese, Romanian and other languages derived directly from Latin. The technical terminology of many of the sciences, most obviously biology and medicine, is in untranslated Latin, as are some of our words and phrases, such as et cetera and ad hoc. And Latin is so much ‘part of us’ that most mottoes of counties, towns, institutions and noble families are in Latin; and the Latin ‘Dei Gratia’ appears on all coins immediately after the name of our sovereign. Finally, it gives us access to a wonderful culture of the past.

But no. True though all that is, it does not serve. It could justify a day or two a week spent learning Latin, but it does not even begin to justify its being the primary and foundational part of education that it used to be. Still less could it justify the extent to which Latin featured in all leading schools until the mid-19th century when Latin and Greek were, literally, the only subjects taught during the eleven or twelve years spent at school.

The real reason that, until recently, Latin had such extraordinary prominence throughout a child’s education was that the recognised purpose of education always used to be far less about imparting knowledge of practical usefulness than about taking the tabula rasa (‘empty page’) that all of us are born as and training our minds and characters so that we enter adulthood with the ability to lead lives that are as satisfactory, satisfying and enjoyable as our circumstances make possible.

Latin brings this about much more effectively than does any other academic subject. Even though learning it is easy enough at the early stages for even those with modest intellectual gifts, it quickly moves on to making demands which force a person’s mind and character to develop well. Specifically, learning Latin trains us to focus our attention, to attend to small details, to memorise extensively, to think logically, to analyse closely and exactly, to deduce and to solve problems, to be diligent, conscientious, self-disciplined, painstaking, thorough, persevering, responsible and much else that is desirable, and for all of which anyone who possesses them has reason to be abidingly grateful.

Thus it was that, as I have said, Latin and its sister-language Greek were until about 150 years ago the only subjects taught in leading schools. Indeed in some of those schools, for instance Harrow, the pupils were not allowed to speak any language other than Latin even outside the classroom, not even on the playing fields. And even as late as the turn of the 20th century, more than fifty per cent of classroom time was spent on classics, and at Eton, for instance, fifty per cent of the schoolmasters were classics masters.

Were children, as a result of this exclusive concentration on the classical languages, deprived and stunted? Pity them not. As a generality, they emerged far better educated in all the other subjects than we, their descendants, are today. It was, moreover, during this period that the British brought about the Industrial Revolution and spread it worldwide; that they were responsible for almost every 19th-century technological invention from the steam engine onwards; that they produced one of the three greatest literatures in history; and that, for better or for worse, they ruled all the oceans and a greater part of the world than any empire had before or ever will again.

As this shows, it should not be supposed for a moment that the other academic subjects were not thought necessary. It was simply that, by comparison, they were recognised as being so easy to grasp that it was not worth spending valuable schoolroom time on them. Rather, so effective was the training provided by the learning of the classical languages that, during school holidays and other spare time, children could simply pick up textbooks on new subjects and understand and master their contents relatively effortlessly.

In modern times it is often asserted that studying other subjects could achieve the same thing – for instance, one or more foreign languages or, best of all, mathematics .

To my certain knowledge, however, no other subject of any kind can come close to matching Latin in the advantages I have been outlining, least of all mathematics. If you doubt me, perhaps you will respect the richest man and greatest money-maker of his day, Jean Paul Getty, who controlled much of the oil industry. When asked why he employed only classicists to run his many companies worldwide, rather than specialists in any other subjects or, even more obviously, graduates of business schools, his succinct answer was: ‘They sell more oil.’ They made him more money.

I stress, too, that Latin is not a subject mainly for the intellectual elite. It is for everybody, from brilliant to the very dopiest. Nor should the decision to learn it be influenced by whether any particular person finds doing so enjoyable or not. There have always been people who have disliked the process of learning Latin, but it is safe to say that none of those of us who have studied Latin has ever, ever wished that we knew less Latin than we do.

The beneficial effects, what is more, are remarkably immediate. I do not exaggerate when I tell my own Latin pupils that they will be genuinely different people by the end of a single one of my lessons than they were at the beginning of it.